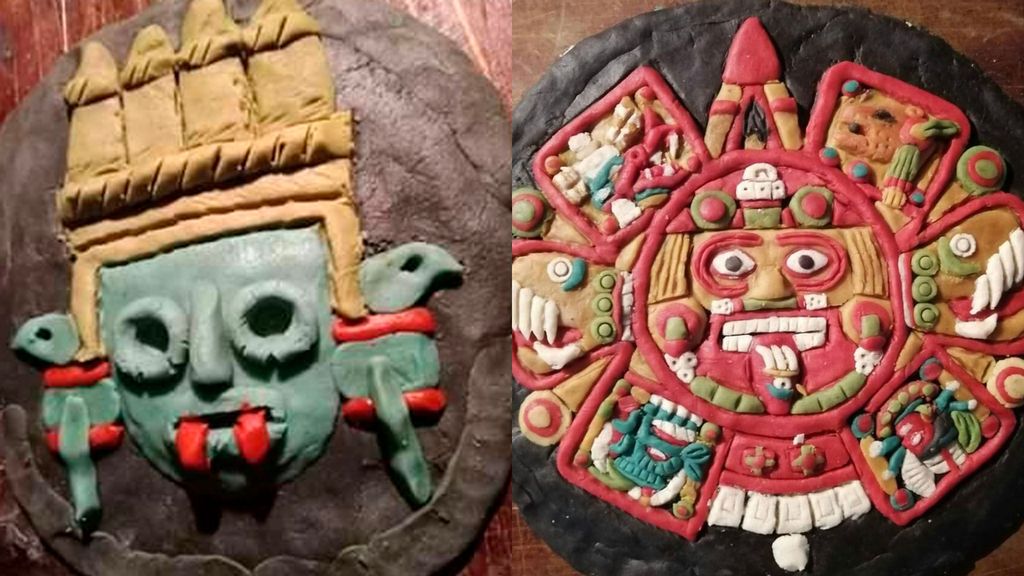 Left, the figure of Tlaloc, the rain god in the Mexica culture, on a cookie. Right, a piece of the sun stone, part of the Aztec culture. (Courtesy of Diego Barranco)

Diego Barranco, a baker from Ozumba, in the State of Mexico, has created cookies with designs inspired by the country’s pre-Hispanic art. He defines his work as “craftwork with bread dough.”

Pre-Hispanic cultures are a group of civilizations that settled in most of what today makes up Mexico, from 1500 B.C. to A.D. 1521, such as the Aztecs, Mexicas, Mayans, Olmecs, Toltecs, Teotihuacan cultures, Mixtecs and Zapotecs.

The 43-year-old baker says his fondness for these cultures led him to combine that period’s cultural heritage with his work.

He is especially interested in the culture of Teotihuacan, which settled in the modern State of Mexico, from the year 300 to 900. When some artifacts depicting the figures were recently found there, he felt inspired to make copies of some of them with bread dough, and then on cookies.

“I saw the archeology pieces that the workers in the area had found, like the masks, some body shapes, that type of thing. I started to practice with the first masks. We learned as we went, developing more art on cookies, and now we’ve become much better at it,” Barranco told Zenger.

Besides baking traditional bread, Barranco has spent the last three years creating figurines with these pre-Columbian motifs. Some of his creations include cookies with masks from Teotihuacan, plumed men, jaguar knights (soldiers from the Mexica Empire), and Mexica deities such as Tlaloc (the rain god), Xochipilli (the flower god) and Coyolxauhqui (the moon goddess). He has also made replicas of the tree of life, a sculpture that is part of the Mexican culture and explains the creation of the world.

Prices vary according to the level of difficulty. A small cookie with a simple figure takes about 10 minutes to make and sells for three to five dollars. An 11-pound “mega cookie” is more complicated. Barranco has spent up to three weeks on them, and they cost $350.

“We’ve made mega cookies the size of a bread pan, 15 by 45 inches. The first one was a tree of life. We put four deities on it: of fire, earth, water and wind. Then, we made another one based on the art of Teotihuacan. We based it on a temple and added some masks and cultural features. You won’t find work like that anywhere else,” he said.

People are very interested in the cookies, and Barranco says he has had to study more about the history of the figures he’s recreating, so he can tell his clients what they mean.

“We have to have some information, know what we’re doing, what it means. For example, you can make a jaguar warrior or a god, and if you don’t know what it is, you have to find out, so you can explain it to people who ask. That draws them in,” he said.

Barranco’s work has been well-received by the customers at his “teotlaxcalli” (divine bread, in Aztec language Nahuatl) workshop in Ozumba, and by people who go there during the festivals and to visit the markets and fairs where he sells his goods.

He hopes the artistic representations from the pre-Hispanic period will live on today. They also link people with their past.

“I think Diego’s design concept is very interesting. Nobody around here had tried to do this type of thing before. I see his dedication to each of his pieces. The art he shares through them is unique, and his cookies and breads are delicious,” Yarmil Rivera, a 36-year-old customer, told Zenger.

Barranco hopes to transmit his technique to the younger generations. Today, he is training his children to take over the business someday and to continue with his recipes and creations.

“They saw how this craft got started. We’re going to pass the trade down to them because they’re going to learn it and not allow this to die,” Barranco said.

“I think it’s interesting [to learn this technique] because it’s like revisiting and preserving a part of ancient pre-Hispanic culture that is still alive through these edible pieces. There’s great responsibility in transmitting this to the younger generations, so our roots and culture will never be forgotten,” said Erick Martínez, Barrancos’ 17-year-old son.

Barranco says he is grateful for the response his products have seen among locals and foreigners. He asks everyone to preserve Mexico’s pre-Hispanic traditions.

“I want to move forward. Now, the market is receptive and people are interested. We’re fighting hard, from the bottom up … Every day we’re doing sketches. We’re constantly coming up with new ideas. I hope everyone enjoys our local craftspeople. There are a lot of them in many Mexican communities who are very talented,” he said.