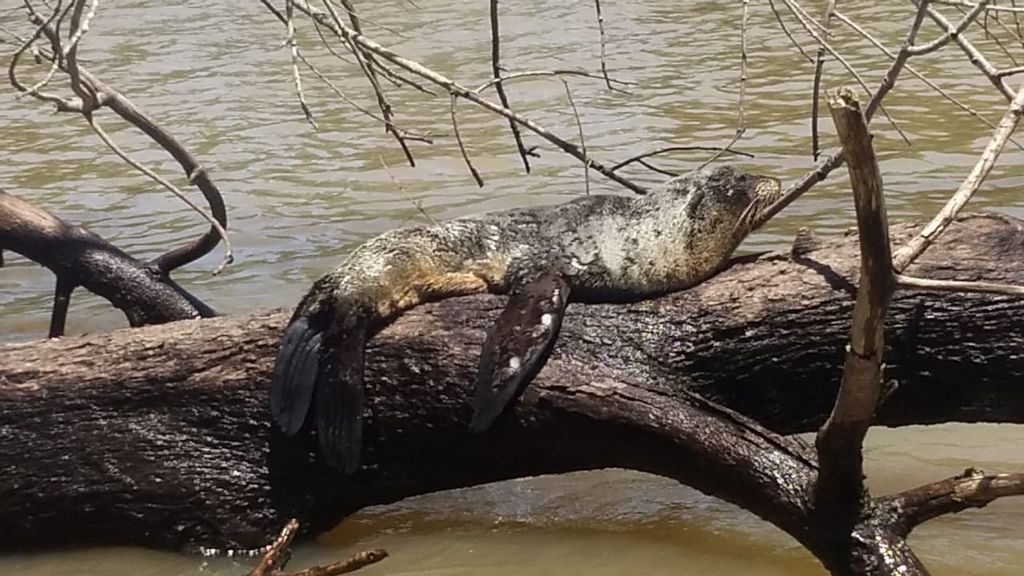 A sea lion that got separated from its colony was rescued by the Argentine Navy. It was found stranded in the Parana de las Palmas River in mid-November. (Argentine Naval Prefecture/Zenger)

The rescue, carried out by the Argentine Naval Prefecture and animal experts, took place on the Parana de las Palmas River in the eastern province of Buenos Aires last weekend.

Navy personnel were carrying out a patrol when they spotted the stranded sea lion and informed the Temaiken Foundation of the Temaiken Biopark.

Together, foundation members and Navy personnel boarded a small, inflatable boat to search for the animal, which was eventually spotted on a rock on the shore.

In the footage, the boat slowly edges forward with a sailor holding a large net. At the last minute, he flicks it up and over the head of the sea lion and captures it. A second sailor helps load the animal into a box, so it can be transported to safety.

The rescued animal was sent to the Temaiken Biopark for care. It is unclear if the animal, which appears young in the footage, was injured at the time or how it became separated from its colony.

Sea lions are commonly found off the coast of Patagonia and the Falkland Islands.

Sea lions spend most of their time in the water, and they return to shore mainly for breeding in the summer months.

Adult males reach 8 feet in length and weigh around 550 pounds. Females are smaller with an average length of 5 feet and weight 265 pounds.

The species can live for months without leaving the water and are excellent swimmers, reaching depths of 330 feet and holding their breath for eight minutes at a time. Sea lions can also swim up to 25 mph and have an average lifespan of 20 years. Age is determined by counting growth layers in their teeth.

However, the pinnipeds do face dangers.

They are victims of bycatch in fisheries and vulnerable to the effects of climate change on ocean, which impacts their fish diet. That includes anchovies, herring salmon, sardines, squid and octopus. Sea lions, which are related to walruses and seals, have 34 to 38 teeth, used to catch and tear their prey.