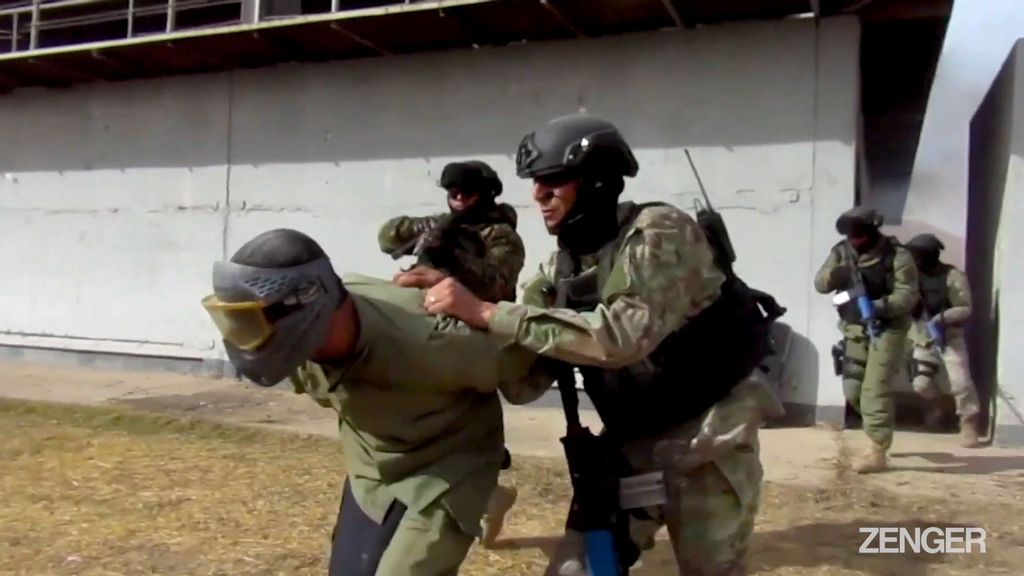 Russian special forces troops, known as Spetsnaz, stormed a building and destroyed an imaginary enemy during a military exercise in Tajikistan.

Footage and an accompanying statement on the exercise was shared online by the Russian Ministry of Defense. The video was taken in Tajikistan as part of a Collective Security Treaty Organization–Collective Rapid Reaction Force exercise dubbed “Cobalt-2021,” which took place Nov. 17–19.

The footage shows Spetsnaz troops, which is an umbrella term used in Russian-speaking countries to designate special forces soldiers, boarding a military helicopter while their colleagues cover them.

The helicopter then takes off and can be seen flying through the sky toward its target.

The footage then shows special forces troops exiting an armored personnel carrier in front of the target building.

The carrier opens fire on an imaginary enemy inside the building while soldiers next to it throw grenades and open fire as they storm it.

The footage then shows smoke grenades exploding, providing cover for the special forces troops as they rush the building.

Next, other special forces team members in the helicopter are shown rappelling down to the roof of an “enemy-controlled building” which appears to be in a desert.

The elite troops are then seen securing the roof of the building before at least two soldiers jump over the side and bust in through the building’s windows, which appear to be open and do not have any glass.

The next part of the footage shows one of the special forces soldiers leaping through a window after having stepped onto two of his colleagues, who are seen crouching down to make a makeshift stepladder for him using their backs.

Heavy gunfire can then be seen as the troops discharge their weapons on the “enemy combatants.”

Some soldiers appear to be playing an enemy. They can be seen being targeted by the special forces troops storming the building. They immediately lie down after they have been “hit.”

The footage ends with a second armored personnel carrier approaching the building. The special forces troops then exit the building with a man with his hands tied behind his back, either impersonating a hostage or an enemy combatant. He is bundled into the back of the armored vehicle as the footage ends.

The Russian special forces were represented by military personnel from the Special Purpose Unit (Spetsnaz) from the Central Military District, the largest military area in Russia, making up 40 percent of the country’s territory, and by troops from the Reconnaissance Battalion of the 201st military base, which is located in Dushanbe, the capital of Tajikistan.