Pilots were filmed making complicated course calculations on centuries-old tech that could be made by a calculator in seconds.
By Joseph Hammond November 22, 2021
Facebook
Twitter
Linkedin
Email 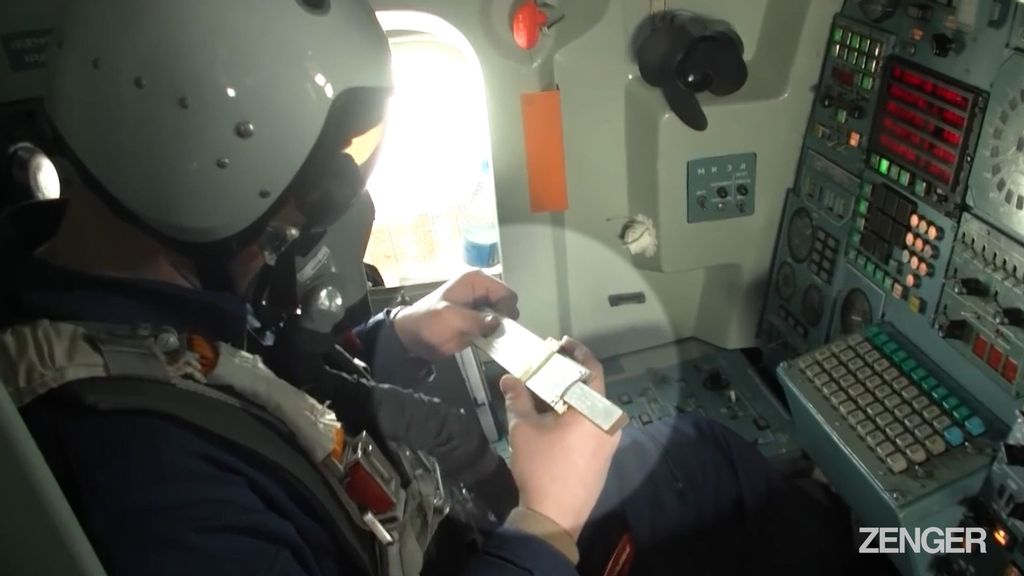 Aboard a Russian Tupolev Tu-160 strategic bomber, a crew member appears to operate a slide rule for a calculation. The incident took place on Nov. 11 during a joint mission with the Belarusian Air Force. (Russian Ministry of Defense/Zenger)

In the tense skies over Central Europe, where Russian and U.S. planes patrol opposite sides of the Belarus–Poland border, Russian military video shows their pilots using slide rules — raising the risk of accidental collisions or other midair tragedies.

Slide rules, which perform multiplication and division, and can calculate different logarithmic scales, largely disappeared from U.S. military bases and college classrooms in the early 1970s, replaced by pocket calculators. That’s why it’s surprising to see the Russians using them in 2021 while traveling hundreds of miles per hour, thousands of feet above a violent border dispute.

In the video, shot aboard a Tupolev Tu-160 strategic bomber and released by the Russian Ministry of Defense, a crew member appears to operate a slide rule for a calculation. The incident took place on Nov. 11 during “patrols” in which the nuclear bombers were escorted by a pair of Su-30SM fighters of the Belarusian Air Force, the ministry said in a statement.

First produced in 1984, the Tu-160 is the largest and heaviest combat aircraft in use by any air force in the world today. It’s also the fastest bomber of its type, capable of speeds surpassing Mach 2.

“[Slide rules are] long replaced by modern technology — IPads, computers, calculators, as well as other technology,” says Dean J. Miller spokesmen for the U.S. Air Force Academy. “However, each cadet is required to take an Airmanship course as part of their experience as a cadet. One of those Airmanship courses leads to the possibility of joining the Academy’s Cessna Aircraft Flying Team. That team trains for an annual competition where flight planning must be completed using a slide rule.”

Miller says the E6B slide rule is used in these circumstances for calculations of the flight path, speed and altitude. A retail listing for the E6B on the Aviation Supplies and Academics (ASA) website describes it as “the best slide-rule-style flight computer on the market, with solid aluminum construction and easy-to-read lettering.”

Slide-rule aficionados who examined the video noted on social media that the E6B is much more advanced than the linear slide rule used by the crew of the Tu-160.

“There are several reasons for using slide rulers,” says Yarl Qman, a former civilian on-board technician who worked with Soviet aircraft. “The calculations are sufficiently accurate and quick. It is easy to use special templates. For example, fuel consumption as a function of humidity and pressure. They also don’t need electric power and are therefore nuclear explosion-proof.”

A detonation of a nuclear weapon creates an electromagnetic pulse (EMP), and if they continue the use of a slide rule aboard Russian aircraft, it would not be the first time.

Colonel Viktor Belenko was on a routine training flight in 1976 with his MiG-25 out of an airbase in the Soviet Far East when he suddenly dived his plane toward the sea and headed to nearby Japan. In an aircraft capable of speeds over Mach 3, he easily evaded Japanese aircraft scrambled to intercept him and landed in a civilian airport and ultimately defected. It was the first time American officials had a chance to inspect a MiG-25.

In addition to the aircraft’s high speed, what most marveled U.S. investigators was its use of vacuum tubes long after the United States had switched to semiconductors. Was the Soviet Union really that far behind? Investigators realized the use of vacuum tubes was intentional, as the aircraft would still be able to operate after an EMP. A sobering thought, given that it implied the Soviet military thought a nuclear exchange with NATO was likely.

Such Cold War thinking may still predominate in the Russian military as the sighting of the slide rule aboard the Tu-160 “Blackjack” suggests. Even the plane’s mere presence is a throwback — the Russian Air Force only operates 16 of the heavy aircraft.

Visuals produced and edited by Claire Swift and John Diaz

«Previous Post
Mental Health: How Your Brain Really Can Cure Your Body»Next Post
Why Are Israelis Masters Of Food Innovation?