Sailors tossed a log to the big cat. It climbed on and was towed safely to shore. 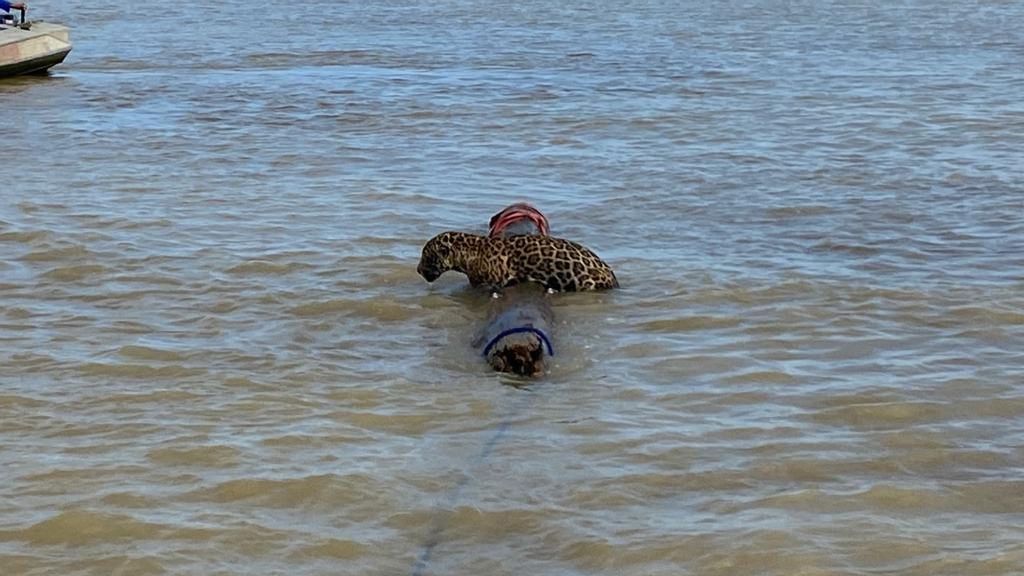 The jaguar is towed safely to shore on a log that was tossed its way by the Colombian Navy. (Colombian Navy/Zenger)

A Colombian Navy crew rescued a jaguar that was swimming adrift at the mouth of the León River in Turbo, Colombia, according to a statement released by the navy on Nov. 15.

Video shows the jaguar that was on the verge of drowning in the middle of a river being saved sailors. The navy crew tied a rope to a log and threw it to the big cat so they could drag it to the shore.

The Leon River, where the big cat was rescued, flows into the Caribbean Sea.

The jaguar was spotted swimming about 1.2 miles from shore and the Urabá Coast Guard Station responded.

A boat was sent to the location, and the sailors threw the log to the big cat hoping it would latch on to it with its sharp claws. The cat seems suspicious of the sailors at first. It took more than an hour of trial and error before it grabbed the lifeline.

After latching onto the log, the big cat can be seen in the video floating behind the boat on its way back to shore.

The jaguar was then returned to its natural habitat in a protected mangrove area, according to recommendation from the Regional Autonomous Corporation of Urabá, a statement from the Colombian Navy said.

It is unclear how the jaguar ended up in the river so far from the bank, the navy said.

The jaguar is the only living member of the genus Panthera native to the Americas. The International Union for Conservation of Nature’s Red List of Threatened Species classifies the big cat as “near threatened.”

The jaguar is the largest cat species in the Americas and the third-largest in the world, with a maximum length of about 6 feet and weighing up to 212 pounds.

Jaguars can be found from Mexico all the way through Central and South America, in Brazil, Argentina, Belize, Bolivia and Colombia. They live in forests, savannas, shrubland, grassland and wetlands.

“Habitat loss, wildlife trafficking, collisions with vehicles, and retaliatory killings by landowners and ranchers who fear that jaguars will kill their livestock have significantly lowered the population numbers of jaguars and threaten them with eventual extinction,” according to the U.S. Fish and Wildlife Service’s International Affairs division.

“When jaguar habitat is conserved, many other species directly benefit.”

The Colombian Navy’s statement said it is committed not only to safeguarding human life on the water, but also to promoting the protection of animals and the environments they inhabit.