The two men were growing more than 1,000 cannabis plants, which police said had a street value of about $1.3 million.
By Lee Bullen November 22, 2021
Facebook
Twitter
Linkedin
Email 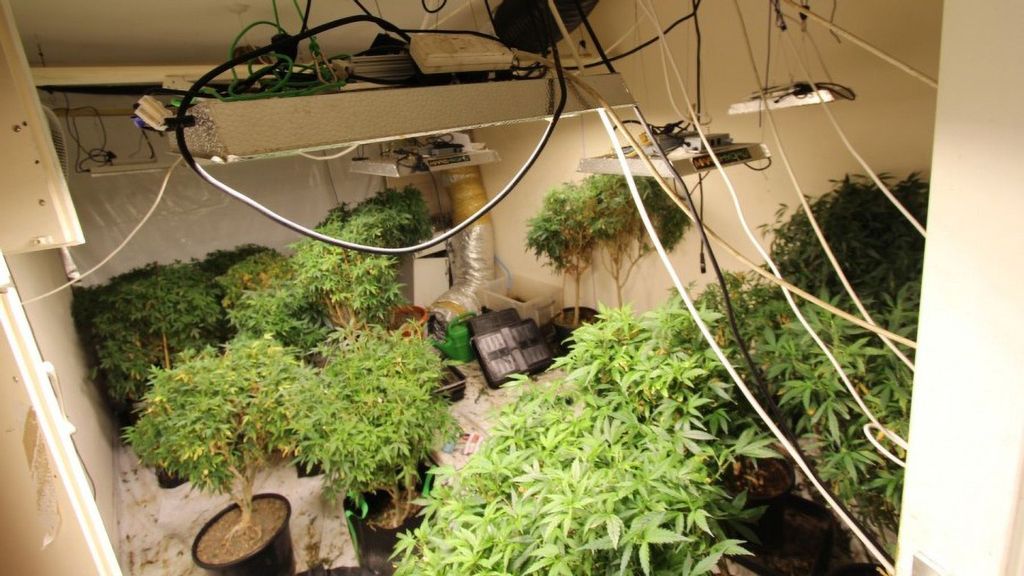 Some of the 1,400 cannabis plants police found in a bungalow in suburban Nottinghamshire, England, in September. (Nottinghamshire Police/Zenger)

Two men in England are each serving more than a year in jail after police discovered a house full of cannabis plants said to have a street value of around $1.3 million.

Video shows Nottinghamshire police raiding a suburban bungalow and discovering what they described as a “drug factory” of more than 1,400 mature plants.

“When they were interviewed by officers, they admitted to tending to the plants but claimed they had been employed by others to live and work at the address,” according to a Nottinghamshire Police statement.

“Both men later admitted charges of cannabis production and appeared for sentence at Nottingham Crown Court on Nov. 12.”

“Cannabis with a street value of around £1m [$1.3 million] was seized when officers raided the property in Lucknow Drive, Mapperley, on 10 September this year,” Nottinghamshire police said.

Inside, they said, they found “a large-scale cannabis grow, with more than 1,400 mature plants crammed into multiple rooms across the detached, secluded property.

“The plants were taken away and destroyed, and an array of sophisticated growing equipment was put beyond use.”

Nottinghamshire Police lead investigator, Police Constable Brian Dacunha said: “Acting on local intelligence we carried out a warrant at a large, detached bungalow. The building had been turned into a very large, sophisticated and profitable drugs factory, with mature cannabis plants in multiple rooms in the house.

“As is the case with most similar cannabis grows, the electrics in the property had been bypassed and left in a very hazardous state.”

Inspector Karl Thomas, Nottinghamshire Police local area commander, said: “Clamping down on drug-related crime is a top priority for the local policing team. I am aware, however, that some people are still of the view that this ‘is only a bit of weed’ and that we should be focussing on different issues.

“But in reality, these kind of large-scale grows are very often linked to ruthless organized criminal gangs from home and abroad whose members won’t think twice about using extreme acts of violence to protect their investment from other equally ruthless criminals.

“Domestic cannabis grows can also create a very substantial fire risk to neighboring properties and will never be tolerated by Nottinghamshire Police.”