“Who is No. 1 in the division, now?” Crawford asked of a ringside Errol Spence. 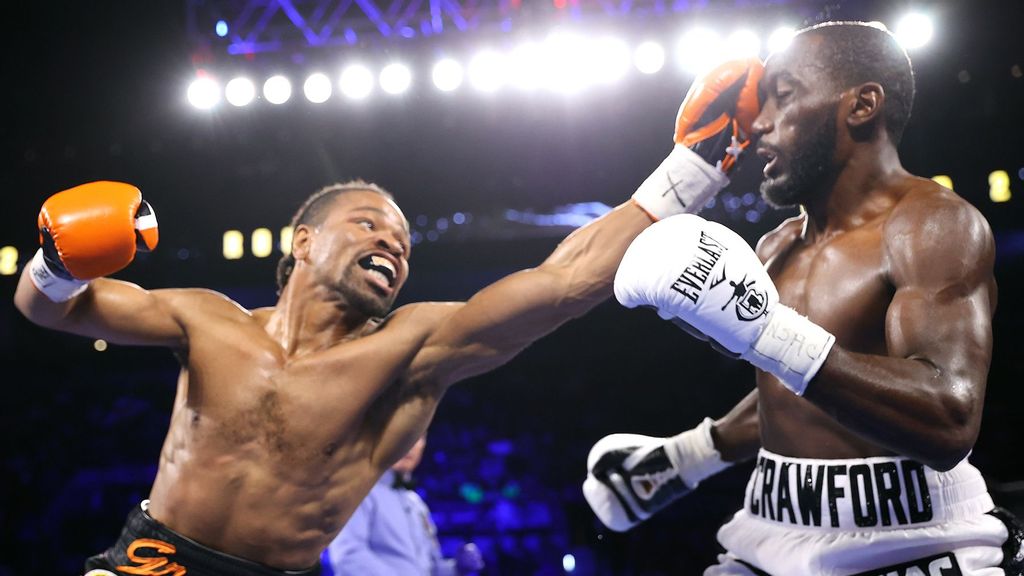 Terence “Bud” Crawford claimed to be “The Man” in a deep 147-pound division that included unbeaten southpaw IBF/WBC counterpart Errol “The Truth” Spence.

And Crawford proved it on Saturday by beating two-time champion Shawn Porter. (Spence was ringside among the sold-out crowd of 11,568 at Michelob ULTRA Arena in Las Vegas.)

A three-division and WBO welterweight titleholder, Crawford (38–0, 29 KOs) earned his fifth defense, sixth straight knockout at 147 pounds and ninth consecutive overall stoppage with a two-knockdown, 10th-round TKO of Porter (31–4–1, 17 KOs), who was knocked out for the first time and whom Spence floored once during a split-decision victory in September 2019 to add Porter’s WBC belt to his IBF version.

Crawford scored both knockdowns in the final round — the first off a left uppercut and the second off a right to the temple. Porter’s father and trainer, Kenny, then climbed the steps and waved a white towel instructing referee Celestino Ruiz to end the fight at the 1:21 mark shortly after his son pounded the canvas with his right fist in frustration.

“Shawn Porter — I’ve said it before, and I’ll say it again — that I can’t say nothing bad about him. He’s been in there with everybody, and he did what he said he would do, but I was just the better man tonight,” said Crawford, whose bleeding cut over his right eye resulted from a sixth-round clash of heads as did Porter’s cut over his right eye from one in the third.

“From round one, I figured I had the reach [74 inches to Porter’s 69&half;]. He had to take chances to get inside. I was a little stronger than him. He was trying to do what he normally does — maul, push me back. But I used my angles, and I pushed him back at times as well.”

During the post-fight press conference, Crawford indicated he has no future with Top Rank, because the match with Porter represented his final bout under his promotional contract with the company.

“I’m prepared to retire. I was prepared to announce my retirement tonight, win, lose or draw. We had a date where they were telling us we were going to have to do it again. I was not going to do it again,” said Porter, who, like Crawford, is 34.

“I am announcing my retirement right now. … I’ve given this sport a great deal. After you’ve fought everybody at the top, what more can you do? I’m not going to live the life of a gatekeeper. … Now is the time.”

Porter was dropped onto his butt 15 seconds into the 10th by Crawford’s left uppercut. Porter beat the count only to be knocked down again, this time, by an equilibrium-stealing right hook to the temple out of his southpaw stance followed by a left to the top of the head and another short right.

“Shawn Porter is a good fighter. He was doing some little slick things in there. It was a thinking match for a certain point of time in there. I took my time,” Crawford said. “I knew I had caught him with a good uppercut. Then I caught him with another left hook; I could see in his face that he was really hurt. His dad did the right thing by stopping it because I was coming with a vengeance.”

Porter pounded the canvas in frustration before rising to his feet and loudly answering “Yes” when asked by Ruiz if he wanted to continue. But by that time, Kenny Porter already had walked up the steps in his corner to signal his intentions to stop the fight.

“[Kenny Porter] is doing what he needs to do. I didn’t expect that. We’ve never had a conversation about that. We’ve kind of always had an unspoken understanding that if he sees what he needs to see, then he’s going to do what he did,” said Porter, who effectively adjusted to Crawford’s switch-hitting style.

“The punches were catching me too cleanly, and I think that’s what my dad saw. I saw it, I felt it, and I just think that my timing was a little off. Great fighter over there. Wouldn’t allow me to catch my rhythm. That was my game plan going in, not to allow him to catch his. He’s a dynamite dude, in and out of the ring. Congratulations to him.”

Porter has overcome losses by majority and unanimous decision to former and current champions Kell Brook (2014) and Keith Thurman (2016) as well as that to Spence (27–0, 21 KOs), who dropped Porter in the 11th round and who was shown leaving the arena after watching Saturday night’s fight-ending sequence.

“[Spence] was at my fight? That boy said he would never be at my fights, and now he’s at my fight,” Crawford said. “Well, you see what I did compared to what he did. My thing is who is No. 1 in the welterweight division, now? I love it.”

“[Shawn] didn’t prepare like I wanted him to prepare, so that just made me say, ‘You know what? I don’t want him in that situation,’” Kenny Porter said. “He fought a great fighter, the guy was sharp, and he was at a deficit. It’s like fighting this guy blindfolded when you’re at a deficit like that, so I wasn’t going to let that happen to him. When guys get to certain levels, they believe they know what they’re doing, and they don’t necessarily take all of the information,” Kenny Porter added.

“This is where we’re at with it, and I had to make that decision. It’s an easy decision for me. He lives right across the street from me. I’ll be having breakfast with him tomorrow. Shawn was hurt, and moving forward, this guy’s a sharp fighter, and my kid is at a deficit at that point. He can’t defend himself like he should, and I’ve gotta protect him. All things combined, [Crawford] can do everything that needs to be done — offense, defense, switching sides, speed, quickness and power.”

“[Crawford] is the best out of everybody I’ve been in the ring with. There’s no doubt I think that man hit me more than anybody I’ve been in the ring with. He was on point, A-through-Z,” Porter said. “The competitor in me won’t stop looking at him and wanting to fight him again. He’s so good that I want to do it again. He’s got it. I’ve said that multiple times in interviews. In and out of the ring, he has it.”

Crawford earned his crown via ninth-round TKO in June 2018 over previously unbeaten Jeff Horn, an Australian who was two bouts removed from a disputed unanimous decision victory over eight-division champion Manny Pacquiao in July 2017.

“I felt like the Jeff Horn performance was better than tonight,” Crawford said. “My versatility and my ability to adjust takes away their strength and makes it their weakness.”

“Terence is different,” Porter said. “You can’t really pick up everything that it is that he does. He does everything more than exceptionally well. I felt like in the fight with Errol Spence Jr., going 12 rounds, I felt like it was not as tough as fighting Terence Crawford.”

Crawford earned his initial crown in March 2014 by unanimous decision over then-WBO 135-pound champion Ricky Burns in Scotland and became a 140-pound champion in April 2015 via sixth-round TKO of Thomas Dulorme.

Crawford made six defenses at 140, highlighted by a unanimous decision in his third defense over previously unbeaten then-WBC counterpart Viktor Postol (July 2016). Crawford’s final defense at 140 was a third-round TKO of previously unbeaten Julius Indongo (August 2017) to become undisputed by adding the latter’s IBF and WBA crowns to his WBC and WBO versions.

“Shawn Porter is a really good friend of mine. I told him that I really didn’t wanna fight him, but we always said we were gonna fight each other when the time was right. I guess the time was right for this fight to happen,” Crawford said.

“I was looking to fight other champions in the division, but since I couldn’t get that, I had to go to the next best thing. You know who I want next. I’ve been calling them out all day. Maybe I’ll go up to 154, or maybe if Spence gets his tail out of his butt, he’ll fight me. It’s whatever, you know what I mean?”