I Hoardius: Cache Of Thousands Of Ancient Roman Silver Coins Found In River

A huge find of 5,600 coins weighing 33 pounds was discovered after a waterway burst its banks. 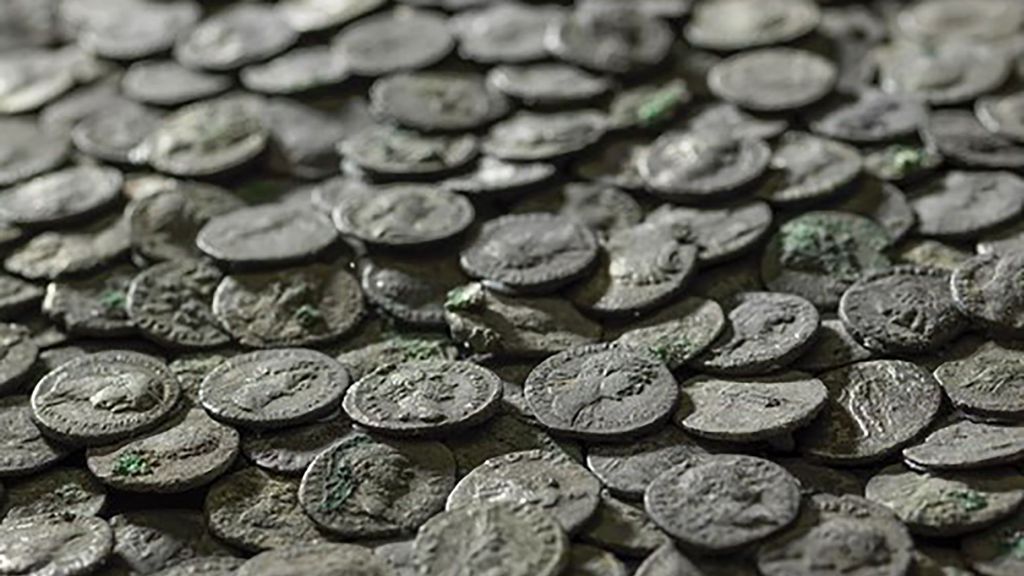 The silver coins minted in the denarii Roman currency were discovered in an old, gravel riverbed in Germany near the location of what was once a Roman military base. (Andreas Brucklmair, KMA/Zenger)

A hoard of 5,600 silver coins from the Roman Empire dating back nearly 2,000 years has been found in Germany.

The Augsburg Art Collections and Museum said in a statement the discovery was the largest such find in the southern German state of Bavaria. The silver coins minted in the denarii Roman currency were discovered in an old, gravel riverbed near the location of what was once an early military base.

The coins, which weigh 33 pounds in total, were discovered during excavation work after floods in the small town of Wertach flushed them out. The statement said that the oldest of the coins were minted under Emperor Nero (A.D. 54–68) and the most recently minted under Septimius Severus, shortly after A.D. 200.

The coins are being analyzed at the University of Tübingen, according to the statement.

“A soldier earned between 375 and 500 denarii in the early 3rd century. The treasure, therefore, is the equivalent of about 11 to 15 annual salaries,” said Sebastian Gairhos, the head of city archeology in Augsburg.

Archeologists also discovered coins from the eras of Emperors Trajan, Hadrian, Antoninus Pius and Marcus Aurelius as well as coins from the era of Didius Iulianus, who was only emperor for nine weeks before being murdered in A.D. 193.

“Augsburg’s rich history just got richer. Again, the importance of Augsburg during Roman times has been made abundantly clear,” said Augsburg Mayor Eva Weber, commenting on the coin discovery.

Previous ancient discoveries in the area have included weapons, jewelry, more than 800 coins, dishes, transport vessels and a variety of devices.

The statement said that the newly discovered objects are “chronologically meaningful,” especially the coins. They allow for the first Roman base in the area to be dated to between 8 and 5 B.C.

“The new finds now allow numerous new statements — not only about the function of the place, the origin and composition of the troops and civilians, as well as replenishment logistics — but above all to its dating,” Gairhos said.

Troops in the area back then were tasked to build up the infrastructure, on top of their military duties.

Toward the end of the reign of Emperor Augustus (around A.D. 10), the first base was replaced by a military camp for around 3,000 soldiers.

From this base, the early civilian settlement of what would become Augsburg emerged. It was called Augusta Vindelicum in medieval times.

“We assume that the treasure was buried outside the city of Augusta Vindelicum near the Via Claudia running there in the early 3rd century and was never recovered,” Gairhos, the Augsburg archeologist, said.