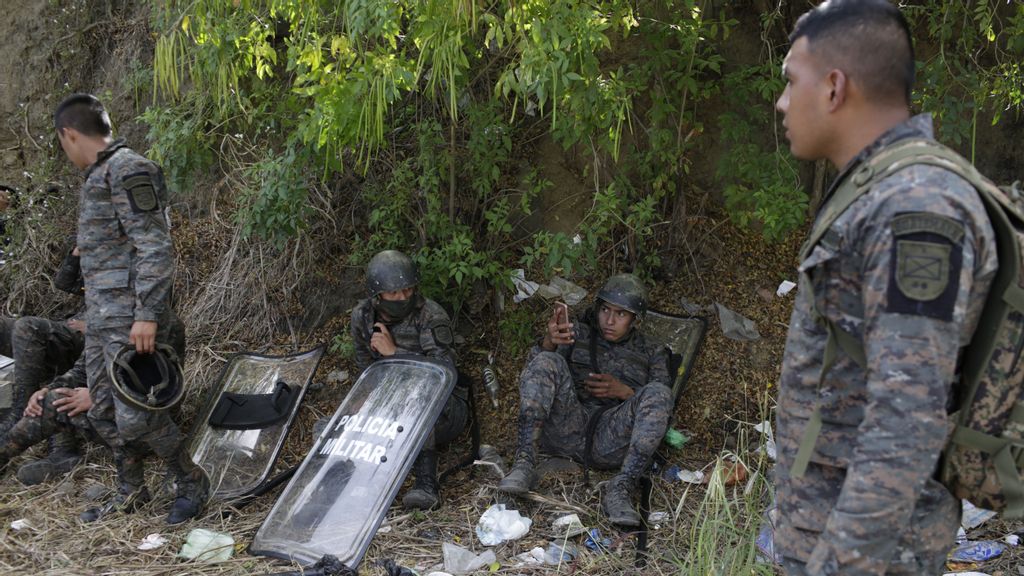 While the U.S. funnels some $310 million to Central American lands, officials and experts are divided about whether those tax dollars are being diverted to fuel a “leftist revolution” or drive much-needed reforms in corrupt local legal systems.

The State Department says the funds are meant to promote democracy and border security.

Both former officials have escaped prosecution at home by extending their stay in the United States, which has made no effort to detain them or turn them over to Guatemalan officials for trial.

Responding to Porras’s indictment of Aldana and Sandoval, the State Department denied a U.S. visa to Porras, who has not been charged with any crime in either Guatemala or the U.S. What’s more, some U.S. officials had praised Porras. The U.S. Embassy congratulated her, and the Department of Justice and the Drug Enforcement Agency thanked Porras for extraditing criminals to the U.S.

In support of the democratic aspirations of the Salvadoran and Guatemalan people, we are naming five Salvadoran Supreme Court Magistrates, Guatemalan Attorney General Porras, and Secretary General Pineda to the Section 353 Undemocratic and Corrupt Actors list.

“Everybody knows she was put on the bad actors list because she fired Sandoval,” Hecht said.

State department officials point to remarks by U.S. Agency for International Development (known as USAID) Administrator Samantha Power, who said at an Inter-American Dialogue ceremony in September that Porras was denied a visa for “obstructing corruption investigations” and for firing Sandoval, who has a long left-wing pedigree and was accused of corruption.

This leads some observers to believe that the U.S. is taking sides in an internal right–left fight in Guatemala. But State Department officials insist they are only trying to aid “anti-corruption efforts” and promote “the rule of law.”

Porras was named to her current position during former President Jimmy Morales’ term in 2018. Morales’ National Convergence Front was founded by a group of former military officers.

Sandoval served as a prosecutor since 2015. During his tenure, he and Aldana filed corruption charges against ex-president Otto Perez Molina, while civic organizations such as Semilla demanded his ouster in tumultuous protests.

After being replaced by Porras, Aldana made a presidential bid with Semilla, but a court disqualified it. Semilla is aware of “the hateful inequalities generated by an uncontrolled capitalism centered in accumulating wealth,” says its website.

Porras has said her agency continues to face “pressure” from the State Department that she says are to the detriment of rooting out corruption.

“Sandoval was their criminal. They knew he committed crimes, but that’s part of their agenda. They think those crimes are justified because of the purity of their agenda and the evil-ness their opponents,” Hecht said.

“Guatemala has never had rule of law,” Hecht said, “But what the U.S. is doing is not helping.”

Soon after, Porras dismissed Sandoval, who left the country and is now facing charges of exceeding his authority. The U.S. sanctions on Porras soon followed.

“I believe that USAID and what I call the human-rights oligarchy have been preparing for the last 10 years for revolutionary change in government without the need for elections,” said Guatemalan political analyst Luis Figueroa. “By removing a president and vice-president on corruption charges, Congress would then choose replacements acceptable to the pressure groups pushing for the change, but not elected by voters.”

The anti-USAID rhetoric “is absurd and disingenuous,” said Justin Wolfe of Tulane University’s Roger Thayer Stone Center for Latin American Studies. “The CICIG [an independent anti-corruption commission] has done profoundly important work and faced considerable efforts to derail its efforts. Guatemala has and continues to suffer from terrible corruption, and the administration of Jimmy Morales was one of the worst in recent memory, certainly since the return of electoral democracy in Guatemala.”

“The United States long supported grotesque human rights violations and corruption in Guatemala under the guise of keeping communism at bay,” said Wolfe. He cited the case of General Efraín Ríos Montt’s “genocidal actions” as Guatemala’s president in 1982–83 after taking power through a military coup.

Wolfe says those who now speak against the U.N.-sanctioned International Commission Against Impunity in Guatemala, known almost universally by its Spanish-language initials, the CICIG, and USAID supported that regime, without supplying evidence for that assertion.

Another speaker at the Washington conference was Iván Velásquez, a Colombian jurist who headed the CICIG. He, too, is a controversial figure in Guatemala.

Hecht and Figueroa told Zenger that Velásquez and his now-shuttered CICIG remain divisive in Guatemalan politics.

Hecht said the State Department and USAID, especially during the Bush and Obama years, and again under President Biden, have pursued policies in Guatemala and broadly in Latin America that “create chaos and favor leftist goals.”

Hecht testified in June before the Tom Lantos Human Rights Commission of the U.S. House of Representatives, “[Ambassador Todd] Robinson used the CICIG as a battering ram to try to change Guatemala’s constitution and to make an electoral law in 2016. This was possible because the CICIG’s extraordinary power derived from its diplomatic immunity and international support, especially from the United States. It could do anything illegally to anyone and did.”

In 2019, a Guatemalan congressional commission heard testimony from citizens alleging abuse by CICIG. Prosecutor Velásquez denounced the commission, claiming that it violates constitutional separation of powers and is “an illegal interference by the legislative branch” into the independent entity. “The ultimate goal of the commission … is to disrupt the (legal) cases that are under way,” Velásquez said.

Hecht told Zenger, “Many Guatemalans fear CICIG because it appears to prosecute people who disagree with it.”