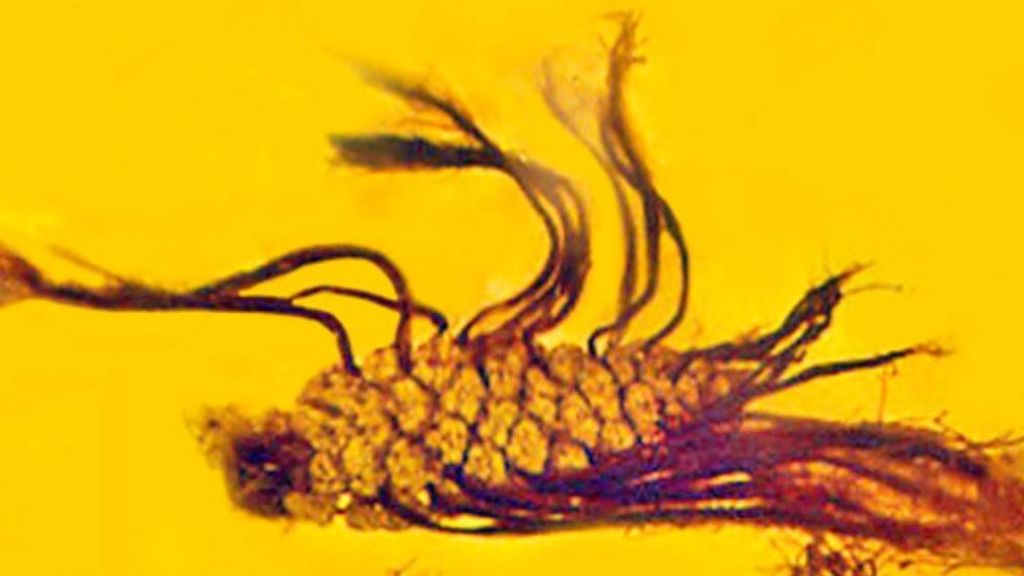 Found in a piece of Baltic amber is the first fossil evidence of a rare botanical condition known as precocious germination in which seeds sprout before leaving their fruit. (George Poinar, Jr.)

The researcher who inspired the book and movie franchise “Jurassic Park” has found the first fossil evidence of rare precocious germination, which is when a seed sprouts before leaving the fruit.

The newly discovered pine cone, encased in Baltic amber during the Eocene Age some 40 million years ago, has several embryonic stems emerging from its seeds.

“Crucial to the development of all plants, seed germination typically occurs in the ground after a seed has fallen,” said George Poinar Jr. of Oregon State University.

Embryonic development, or viviparity, while still within the parent is typically associated with animals, but according to Poinar, it “does sometimes occur in plants,” typically appearing in angiosperms. Angiosperms are flowering plants that produce seeds within fruit and provide most of the food people eat.

“Seed germination in fruits is fairly common in plants that lack seed dormancy, like tomatoes, peppers and grapefruit, and it happens for a variety of reasons,” said Poinar. However, it is rare in gymnosperms and even rarer in pine cones.

Gymnosperm plants, such as ferns and pines, produce unencased seeds on scales, leaves or cones. According to Poinar, only one naturally occurring case of precocious germination in a modern pine has ever been recorded.

“That’s part of what makes this discovery so intriguing, even beyond that it’s the first fossil record of plant viviparity involving seed germination,” he said. “I find it fascinating that the seeds in this small pine cone could start to germinate inside the cone and the sprouts could grow out so far before they perished in the resin.”

Poinar’s findings have been published in the journal Historical Biology. His previous work inspired Michael Crichton, the author of the novel “Jurassic Park,” which was adapted into a major movie franchise, in which ancient DNA was injected into living organisms to recreate dinosaurs.

In his paper, Poinar pointed out that the seeds of the pine cone had produced embryonic stems. “Whether those stems, known as hypocotyls, appeared before the cone became encased in amber is unclear. However, based on their position, it appears that some growth, if not most, occurred after the pinecone fell into the resin,” he said, making a comparison to ancient insects ejecting their eggs upon being smothered in amber.

The fossilized cone may belong to the extinct pine species Pinus cembrifolia. Pine cones encased in Baltic amber are not common, Poinar said. Because the cones’ scales are hard, they are usually well-preserved and prized by collectors.

According to Poinar, plants show viviparity in two ways. Of the two, precocious germination is most common. The other is vegetative viviparity, such as when a bulbil, sometimes known as a “pup,” emerges directly from the flower head or stem of a parent plant.

Modern gymnosperms, including pines, are known for viviparity linked to winter frosts. In the case of the forest environment that produced Baltic amber, light frosts would have been possible in a humid, warm-temperate environment. The Eocene period, which lasted from about 55 million years ago to 33 million years ago, was noted for variations in climate that allowed even palm trees and reptiles to live at higher latitudes. It ended with colder temperatures and a mass extinction event.

“This is the first fossil record of seed viviparity in plants, but this condition probably occurred quite a bit earlier than this Eocene record,” Poinar said. “There’s no reason why vegetative viviparity couldn’t have occurred hundreds of millions of years ago in ancient spore-bearing plants like ferns and lycopods.”

«Previous Post
Forests Are On The Move To Higher, Wetter Habitats»Next Post
I Hoardius: Cache Of Thousands Of Ancient Roman Silver Coins Found In River