“It’s about learning to live life on and off the mat,” says the “fake gangster” turned altruistic warrior.
By Lem Satterfield November 19, 2021
Facebook
Twitter
Linkedin
Email 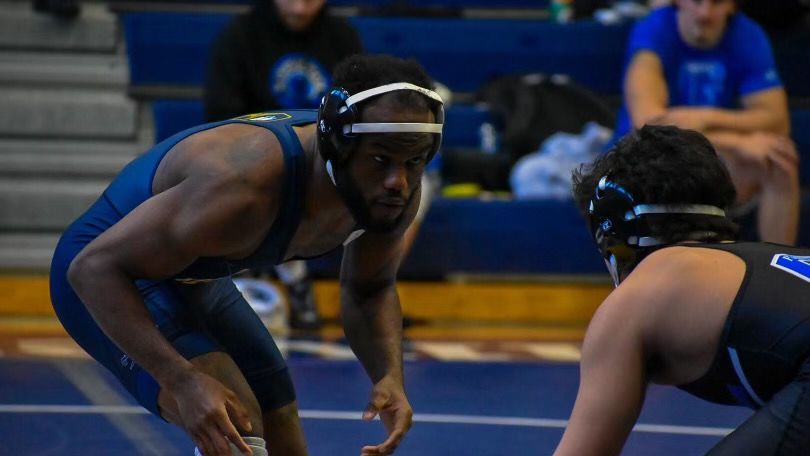 Jamar Williams (left) has transitioned from being a troubled inner city youth who was often removed from school for fighting to a youth mentor, 4.0 student and champion wrestler at Alderson Broaddus University in Philippi, West Virginia.

Jamar Williams’ 165-pound championship wrestling match in February was his life in microcosm.

Tied at 3–3 with 24 seconds left and rival Chase Morgan of West Liberty University on the attack, Williams countered a double-leg takedown attempt on the edge of the mat by spinning behind for a 5–3 victory.

Williams improved to 2–1 against Morgan, ended his season with a 6–1 record to lead Alderson Broaddus University to fourth place in the eight-team field, and became the Battlers’ first Mountain East Conference champion.

“It might have looked like he had me because he had my leg up in the air, but I’ve always had a bull’s-eye on my back,” said Williams, who was named the Battlers’ Athlete Of The Year for all sports. “I was familiar with the positioning because I had worked on it several times in practice. Plus, with everything I’ve been through, I’m built for moments like that.”

Born in an impoverished section of East Baltimore, a young Williams encountered financial difficulties while living with his mother and two older siblings. A self-proclaimed “problem child,” Williams was removed from school several times for fighting before he was 12, and he lived in at least four different homes by the time he was 15.

“My mom did her best to support us but would go on the corner and sell drugs. I was in trouble 24-7 and was basically told I would never succeed in life,” Williams said. “Sometimes our lights would be cut off. We had no hot water and had to boil water on a stove. The biggest thing is, I didn’t want my mom feeling like she ever had to deal with situations like that again.”

A 12-year-old Williams sounded the alarm — literally being “kicked out of school for pulling a fire alarm.”

“I wouldn’t call it a cry for help,” said Williams of his seventh-grade year. “It was more like me trying to be something I’m not, a fake gangster to impress older guys.”

Eleven years later, Williams has transformed into an altruistic warrior.

Now a 23-year-old senior at Alderson Broaddus University in Philippi, West Virginia, Williams has a 6–0 wrestling record at 157 pounds and was recently honored for his accomplishments at a home basketball game.

“Jamar became the first individual champion in the school’s history last year, and he did it wrestling at 80 percent on a bad knee,” said seventh-year coach Sam Gardner. “Jamar’s been in some of the worst possible situations in life, yet he continues to do the right thing, achieving success and setting an example to the rest of the team.”

Set to graduate in May with a 3.6 grade average, Williams has a double-major in sports management and accounting, a minor in business administration, and a goal to earn a master’s degree in education.

“I’ll hire Jamar to work for me after he graduates from college,” said Bryan Hamper, a sports agent for mixed martial artists and baseball players who was Williams’ wrestling coach at South Carroll High in Maryland. “By then, I’ll be working with NFL players. Jamar can get his [sports agent] license and start representing athletes. There’s a lot Jamar can share about being a good role model and human being.”

Williams graduated from high school in 2017, four years after Hamper became his legal guardian. On Williams’ right thigh is a tattooed map of Baltimore beneath the word “Built,” and on his left, one of Carroll County beneath “Different.”

“I say I’m ‘Built Different’ because my life would be 100 percent different if I hadn’t met coach Hamper in Carroll County and others in Baltimore City,” said Williams, who still lives with Hamper, his wife and four sons. “I want people to understand that a lot of us black men are often the first generation not only to succeed in school, but to go to college and advance beyond that.”

In addition to those at South Carroll and the McKim Center in Baltimore City, Williams mentors in programs at the Sykesville, Maryland-based Warhawks, Warriors and Winfield Cavs, as well as the Mount Airy-based Maniacs.

Ryan Herwig, a volunteer coach with the Warhawks in Sykesville, Maryland, sees Jamar “one day being a phenomenal wrestling and life coach.”

“Wrestling changed Jamar’s life, helping him to stay off the streets and away from drugs,” Herwig said. “Jamar is always giving back. He’s always talking to and inspiring kids with stories about when he struggled the most. He’ll never forget where he came from.”

“Jamar’s friend, Acoyea Ford, called me saying, ‘my friend, Jamar, is struggling and needs help.’ I said, ‘I’ll come get him and see what I can do,’” said Hicks, whose sons, Dequan and Kier Jr., befriended Williams. “Jamar’s mom was doing all she could to take care of him, but he got in trouble and locked up over something having to do with a stolen car. After that, I wouldn’t let him go back home.”

Williams moved in with Hicks, and, later, Acoyea’s parents, Floyd Ford and Nakia Phillips, and remained active in football and wrestling. Williams was a ninth-grader at the city’s Bluford Drew Jemison boys school when Hamper met him during a summer tournament.

“One of my wrestlers was a state champion as a freshman who didn’t have a close match in Maryland,” Hamper said. “But all of a sudden we go to a tournament and Jamar, wrestling for McKim, gives him all he can handle, losing, 1–0.”

“Our move was completely documented and legitimate with the county and state,” Hamper said. “Jamar has mild dyslexia and was able to participate in an IEP [Individualized Education Program.] He became an honor roll student, at one point achieving a 4.0.”

Williams was a member of three state tournament championship wrestling teams at South Carroll. Individually, he won three each in county and state titles as well as two regional crowns at 138, 160 and 170 pounds.

As a senior running back and defensive back with 4.35-second speed in the 40-yard dash, Williams rushed for more than 2,000 yards and 29 touchdowns, leading the Cavaliers to county titles as a sophomore and junior.

“My mom saw South Carroll as a good place for me to succeed,” Williams said. “Coach Hamper and his family welcomed me with open arms, helping me to succeed academically and become the man I am today.”

A two-time Maryland private schools state champion, Henry spent two years at Ellsworth Community College in Iowa Falls, Iowa, where he was an Iowa Community College Athletic Conference runner-up as a 174-pound sophomore after missing his freshman season with an injured right knee.

“What really got me was seeing Jamar here,” said Henry, who has an 8–1 record. “Jamar was my practice partner in junior leagues. I‘ve known Josh since I started wrestling, and I also knew a lot of other guys on the team.”

Laubach transferred from Campbell University in Buies Creek, North Carolina, having “quit the team” before the start of his freshman season, suffered from depression, and “gained 35 pounds.” But last year for the Battlers, Laubach went 9–2 as a conference runner-up, and is currently 9–0 after winning last weekend’s Washington & Jefferson Invitational in Washington, Pennsylvania.

Like Williams, Laubach and Henry return to the Baltimore area to work with those in their former programs. Henry’s father, Lydell, co-founded Beat The Streets Baltimore in 2011. The nonprofit produced Henry and Williams, running primarily out of the Upton Boxing Club and using wrestling, tutoring and mentoring to academically engage young student-athletes.

“Before covid happened, we would go to Johns Hopkins and get tutoring from students or have small tutoring sessions before practice at Upton Boxing Center. During the summer, we had financial literacy classes,” said Laubach, a former Maryland private-schools state wrestling champion. “There are kids I’ve coached since they were 5-year-olds, and I plan on seeing them when I go home for holiday breaks. I want them to know they can do anything they set their minds to.”

Other Marylanders competing for the Battlers include former freshmen Sparrows Point wrestlers Lexx Car (184), Richard Davis (141) and Jake Rallo (174), who were first, second and third in the public schools’ state wrestling tournament.

As for Williams, he has come a long way from the troubled 15-year-old who transitioned from Baltimore City to Carroll County.

“I’m always willing to go back and talk to kids, not only about wrestling and sports, but about life. I’m about giving back to other young men to help them to grow into better men than I was. I also want to bring awareness to mental health,” Williams said.

“I’ve had my troubles, and I still see a [therapist] today. A lot of athletes go into a shell and don’t talk about it, but it’s bigger than just being in sports. It’s about learning to live life on and off the mat. I want young men to know we’re bigger than what someone else labels us.”