“Perfect” performance from the mini-helicopter mapping the Martian terrain. 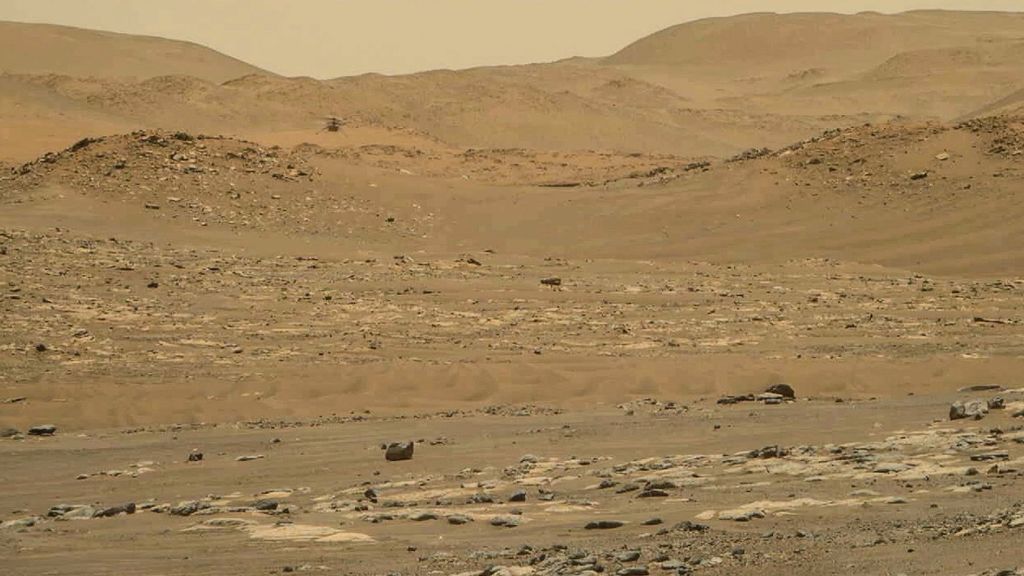 The Perseverance Mars rover captures a view of the 13th flight of the agency’s Ingenuity Mars helicopter, on Sept. 4, 2021. (NASA, JPL-Caltech, ASU, MSSS/Zenger)

The Mars helicopter Ingenuity’s success in surveying the Red Planet’s terrain and transmitting photos from 26 feet above the Martian surface on its previous mission has NASA excited about the next one scheduled for November 20.

Video of the Sept. 4 test flight shows the 19-inch-tall mini-helicopter on a 160.5-second flight hovering over varied terrain and snapping pictures for the Mars rover team. The helicopter often works in tandem with the Perseverance rover, carrying out scouting missions by providing it with a view of what is up ahead, NASA said in a statement.

The video was captured by the rover’s Mastcam-Z and shows the mini-chopper taking off and landing safely. Close-up footage was recorded of the take-off and landing specifically so that scientists could study the dust plumes generated in the process. The agency said the rotorcraft performed to “near-perfection” on the test flight.

“The value of Mastcam-Z really shines through with these video clips,” Justin Maki, the deputy principal investigator for the Mastcam-Z instrument, said.

“Even at 300 meters (984 feet) away, we get a magnificent closeup of take-off and landing through Mastcam-Z’s ‘right eye’. And while the helicopter is little more than a speck in the wide view taken through the ‘left eye,’ it gives viewers a good feel for the size of the environment that Ingenuity is exploring.”

The small helicopter is shown in the video creating a plume of Martian dust on take-off and then climbing to its maximum altitude of 26 feet before turning its camera toward the area targeted for scouting. Ingenuity then flies horizontally above the planet’s surface.

It then returns to land near where it originally started. Scientists selected the new landing zone, located about 39 feet from where it took off, to avoid sand that had become uneven following previous missions and may have complicated the landing.

“Since the helicopter’s navigation filter prefers flat terrain, we programmed in a waypoint near the ridgeline, where the helicopter slows down and hovers for a moment,” Ingenuity Chief Pilot Håvard Grip of NASA’s Jet Propulsion Laboratory in Southern California said.

“Our flight simulations indicated that this little ‘breather’ would help the helicopter keep track of its heading in spite of the significant terrain variations. It does the same on the way back. It’s awesome to actually get to see this occur, and it reinforces the accuracy of our modeling and our understanding of how to best operate Ingenuity.”

Before the mission, NASA had serious doubts about the efficacy of the project, as the air on the surface of Mars is as thin as the air 18 miles above Earth’s surface. But the helicopter has exceeded expectations.