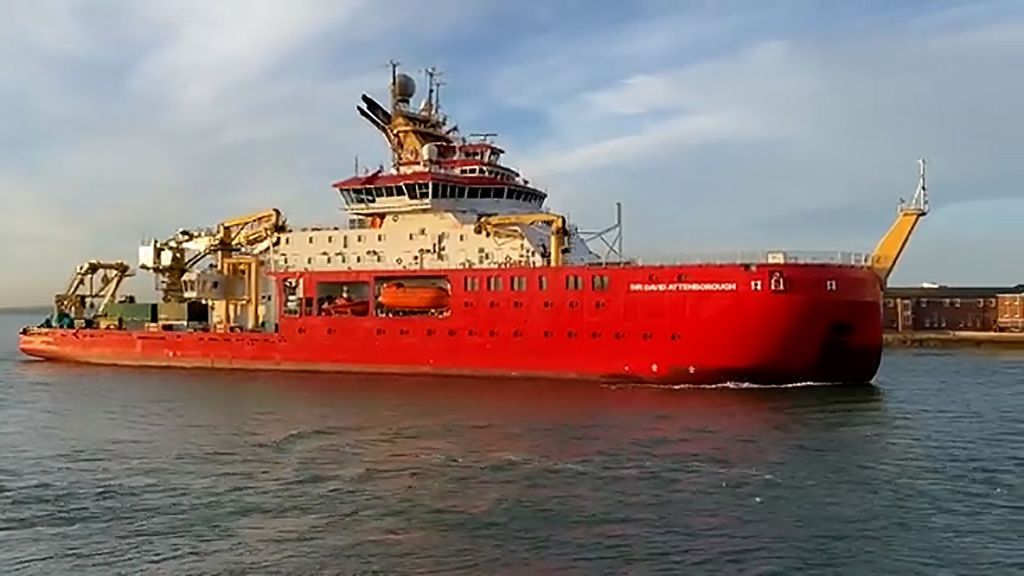 The arrival of RRS Sir David Attenborough in Portsmouth, England. The research vessel later departed for its first voyage to Antarctica. (@PortsmouthProud/Zenger)

A state-of-the-art research boat named after a famed British broadcaster, nature historian and author has set off on its maiden voyage to Antarctica.

The RRS Sir David Attenborough was built by Cammell Laird in Birkenhead, England. After undergoing sea trials, it then traveled to Portsmouth, England, to fuel up before heading for the first time to the continent that’s home to the South Pole.

The U.K.’s most advanced polar research vessel’s maiden voyage follows weeks of testing anchoring, maneuvering and dynamic positioning, as well as other engineering systems, such as freshwater making, that cannot be evaluated while in port.

Commissioned by the United Kingdom’s Natural Environment Research Council and operated by the British Antarctic Survey, the new polar ship’s missions are critical for understanding and making sense of the changing climate, its owner/operators say. After the sea trials and refueling, the ship is now heading to the Antarctic for extensive ice trials on its maiden voyage.

“This multidisciplinary research platform will transform how ship-borne science is conducted in the polar regions and provide scientists with state-of-the-art facilities to research the oceans, seafloor, ice and atmosphere,” the Natural Environment Research Council said in a release.

The ship boasts scientific laboratories to support the study of the ocean, the ice, the atmosphere and more. Mission scientists also have access to a variety of robotics and remotely operated vehicles — including the famous autonomous underwater vehicle named Boaty McBoatface by an Internet poll.

The ship is registered in the Falkland Islands, part of a long tradition of registering British Antarctic Survey ships and aircraft there, and underpins the ship’s role in delivering scientific research results in the South-west Atlantic and Antarctic region.

In its science and logistics missions, the RRS Sir David Attenborough will regularly visit three British Overseas Territories: the Falkland Islands, South Georgia and the South Sandwich Islands, and British Antarctic Territory. Setting off on the maiden voyage marks a major milestone in the vessel’s five-year build program by British shipmaker Cammell Laird at its shipyard in Birkenhead.

From laying the keel in October 2016, to the hull launch in July 2018 and the Royal ceremonial naming in September 2019, more than 1,300 local personnel, 70 apprentices and many hundreds of specialist subcontractors and suppliers have been involved in constructing the 15,000-ton vessel.

The man the ship is named after (who is now 95) has been called “the undisputed father of the modern nature documentary.” Attenborough’s series for the British Broadcasting Corp. include “Zoo Quest” in the 1950s and “Life on Earth” in the 1970s.