Undefeated Terence ‘Bud’ Crawford: I Am ‘The Man’ In Boxing’s Welterweight Division

He gets to try and prove that Saturday night in Las Vegas, where he will defend his WBO title against ‘Showtime’ Shawn Porter. 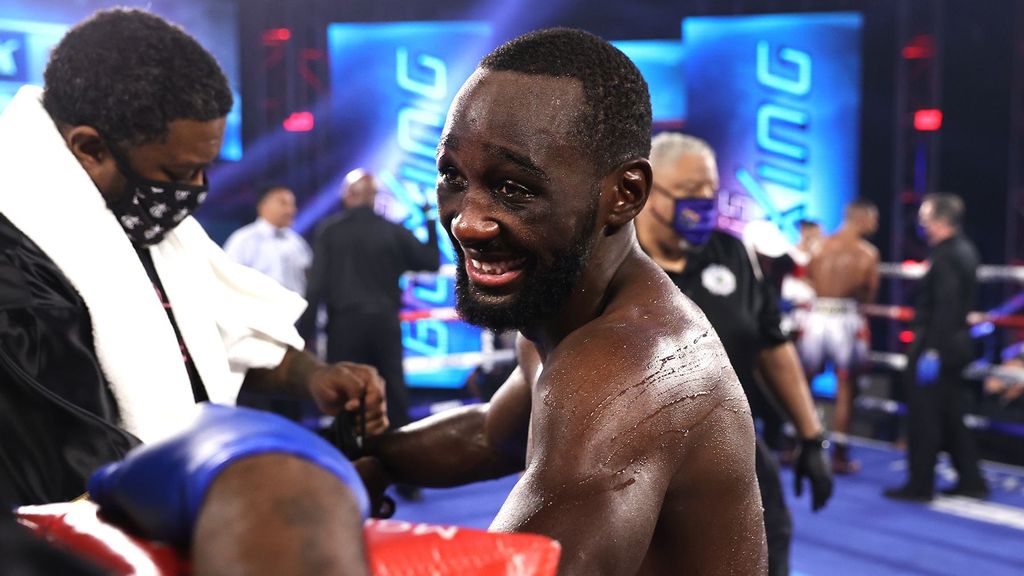 “All eyes are on Terence Crawford. And everybody wants to see how Terence Crawford does against Shawn Porter,” said the undefeated three-division champion (above) of Saturday's defense of his WBO 147-pound title. (Mikey Williams/Top Rank)

Terence Crawford was asked during a virtual press conference what makes him “The Man” to beat in a deep 147-pound division that includes unbeaten southpaw IBF/WBC counterpart Errol Spence.

The switch-hitting three-division and WBO titleholder was referring to his title-winning ninth-round TKO in June 2018 of previously unbeaten Jeff Horn, an Australian who was two bouts removed from a disputed unanimous decision victory over eight-division champion Manny Pacquiao in July 2017.

Crawford (37-0, 28 KOs) will make his fifth defense and pursue his sixth straight knockout at 147 pounds on Saturday against two-time champion Shawn Porter (31-3-1, 17 KOs), a man expected to provide “Bud’s” most difficult challenge on ESPN+ Pay Per View from Michelob ULTRA Arena in Las Vegas.

“I’ve been pushed to limits multiple times, and I’ve answered every single time, while I don’t think Terence has been in the ring with enough quality that can push him to some limits,” said Porter, a 34-year-old coached by his father, Kenny.

“I’ve had the experiences required to get the job done and be that first guy to do it against Terence Crawford. When you turn it on, and you make adjustments, you’re winning rounds and ultimately trying to hurt Terence and put him in vulnerable positions.”

Porter went the distance in his last fight in August 2020, a shutout unanimous decision (120-108 three times) over Germany’s Sebastian Formella, who entered at 22-0 (10 KOs).

“I do believe that I have the power to knock [Crawford] out, and we’ve been working on and focusing on that,” Porter said. “I believe we have some tricks up our sleeve that will open up that clean shot that we need to stop Terence Crawford””

Along the way, Porter has overcome losses by majority, unanimous and split decision to former and current champions Kell Brook (2014), Keith Thurman (2016) and Spence (2019).

“We already know what Shawn Porter brings to the table. We just prepare for what I need to sharpen up on so that we’re ready when Shawn Porter does what he does,” said Crawford, who is 15-0 (12 KOs) in title fights. “Shawn Porter’s been fighting all of the top welterweights in the division. He’s facing everybody and he’ll fight anybody. We’re ready and willing to walk through fire to get that victory.”

“I think my style matches up really well with Shawn Porter’s. He’s got an underrated boxing IQ,” said Crawford, whose trainer is Brian McIntyre. “He’s faster than people think that he is; he moves better than people think that he does. I’ve been calling for all of these top welterweights since I came into the division. There was really nothing I could do. I just had to bide my time and be patient.”

Top Rank CEO Bob Arum considers Crawford to be among the best fighters with whom he’s ever worked, including Hall of Famer Sugar Ray Leonard.

“It was a dominating performance over a very good fighter in Kell Brook,” said Arum, 89, who guided much of Pacquiao’s career. “Terence Crawford ranks up there with all the great welterweights I’ve promoted.”

Crawford earned his initial crown in March 2014 by unanimous decision over then-WBO 135-pound champion Ricky Burns in Scotland, and became a 140-pound champion in April 2015 via a sixth-round TKO of Thomas Dulorme.

Crawford made six defenses at 140, highlighted by a unanimous decision over previously unbeaten and then-WBC counterpart Viktor Postol (July 2016). Crawford’s final defense at 140 was a third-round TKO of previously unbeaten Julius Indongo (August 2017) as he became the undisputed champion by adding the latter’s IBF and WBA crowns to his WBC and WBO versions.

“At this moment, Shawn Porter is perceived to be my toughest opponent,” Crawford said. “But Kell Brook was supposed to be the toughest opponent at the time, and so was Jeff Horn and Viktor Postal. I can go on and on.”