Social Unrest, Allegations Of Corruption Could Bring Down Presidents Of Argentina, Brazil And Chile

As the leaders face a drop in popularity, the people deal with serious social, economic and health issues.
By Luciano Nagel November 19, 2021
Facebook
Twitter
Linkedin
Email 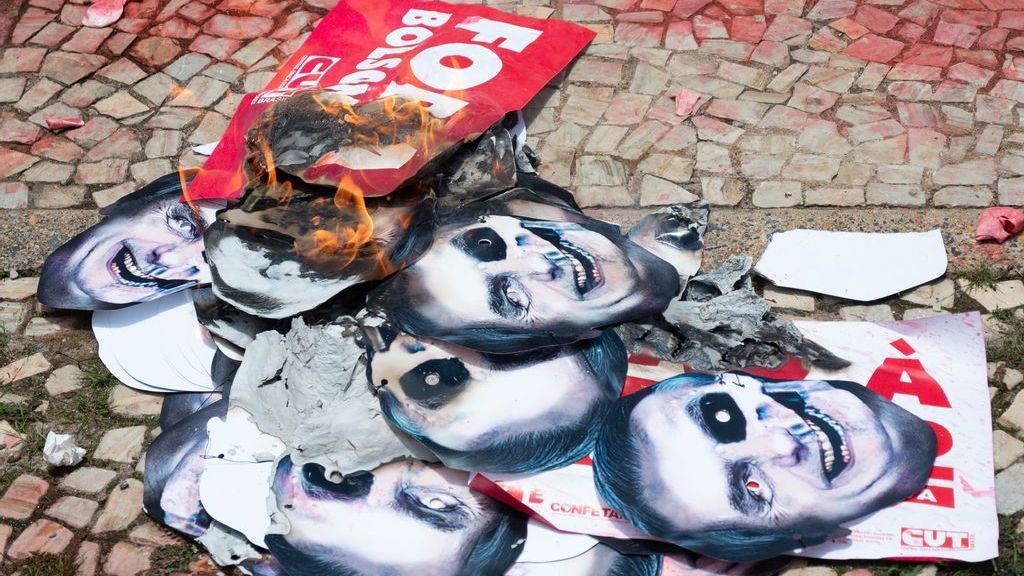 Masks with the altered image of Brazilian President Jair Bosonaro are burned during a protest about government measures to handle the COVID-19 pandemic on Oct. 20, in Brasilia, Brazil. The country’s Senate is currently looking into the government’s role in mismanaging the response to the virus. (Photo by Andressa Anholete/Getty Images)

Argentina, Brazil and Chile, known as the ‘ABCs’ and as the Southern Cone, tend to stand out as leaders in South America.

Today, all three are going through uncertain political scenarios, due to corruption, the pandemic and economic and social issues.

A century ago, Argentina was considered one of the wealthiest nations in the world. In 1912, the South American country had the ninth-highest income per capita on the globe, ahead of Denmark, France and Germany.

Then, the country underwent a series of coups and dictatorships. Today, it is the International Monetary Fund’s main debtor nation and is on the brink of another social and economic breakdown.

The Peronist president Alberto Fernández’s response to the pandemic set off angry responses among the population.

“With the pandemic, Alberto Fernández at first was very successful because he made it a priority,” said María Lourdes Puente Olivera, a political scientist from the Argentine Catholic University.

His success was short-lived.

“There was a significant unknown around what he was going to do, and he worked with the opposition. That didn’t last long, and then the government started to crack from the inside, as did relations with the opposition, and that made it seem that his performance was leading the country nowhere.”

Puente Olivera says fear over COVID-19 and the prolonged quarantine brought about an economic downturn in the country.

“The lockdown was too long and really harmed the Argentine economy,” said Puente Olivera, although she said the health emergency set off “a very robust assistance program by the state for all affected sectors, and there was a very unified response from society regarding, for example, everything related to food assistance.”

“The truth is that the Argentine society didn’t trust the president’s leadership because he seemed solitary and erratic. So, I think his behavior in that sense began to weaken. Argentina needs like never before a general agreement between the government and the opposition to align ideas and give society confidence,” she said.

In September, the Argentine government came to an agreement with employers and unions to increase the minimum wage for the second time in 2021. Beginning Oct. 1, it is 33,000 pesos, or $320 a month.

One in every three Argentines lives under the poverty line, per the National Statistics and Census Institute for the first half of 2021.

In October 2019, about 1 million people took to the streets of Santiago to protest a price hike on subway tickets. The demonstrations extended for several days and led to at least 20 deaths. Stores were set on fire and people clashed with police and the armed forces.

The protests reflected badly on President Sebastián Piñera, who soon after had to deal with the pandemic.

Chileans are increasingly dissatisfied with the nation’s political, economic and social systems, says Miguel Ángel López Varas, a political scientist at the University of Chile.

“President Sebastián Piñera’s image was already damaged a while ago, since the social protests that erupted in Oct. 2019. Piñera’s lack of response to the protest, where right-leaning people wanted stronger acations by the carabineros [Order and Security Forces] to put down the protests, and the opposition said the security forces’ reaction was too violent, all weighed on Piñera’s popularity.”

At the beginning of the month, in central Chile, a person of Mapuche descent was killed and five others were wounded during a confrontation with police and military forces in the Arauco province, in the Biobío region, 45 miles south of the city of Concepción.

On Nov. 5, the United Nations condemned the acts and told the government of Chile that the use of lethal force to maintain order went against the clause “Law enforcement officials shall not use firearms against persons except in self-defence or defence of others against the imminent threat of death or serious injury.”

Chile’s Chamber of Deputies approved on Nov. 9 the constitutional accusation against Piñera, after the Pandora Papers scandal and new events regarding the sale of the Dominga mining company in which the president was accused of being involved in a criminal investigation by the Attorney General for possible bribery and fiscal crimes.

The deputies accuse the president of violating the principle of probity and the right to live free of pollution [from mining], and of seriously compromising the nation’s honor. Now, the accusation goes to the Senate for approval, in which case Piñera risks impeachment.

On Nov. 21, Chileans will go to the ballot box to elect a new president, Piñera’s successor. They will be the most polarized elections in the country since the return to democracy [after the Augusto Pinochet military dictatorship] in 1990, says López Varas.

The candidate who is part of Pinochet’s legacy, José Antônio Kast, is running against the candidate for the Frente Amplio coalition, Gabriel Boric. The two are leading in the polls and there may be a runoff election on Dec. 19.

Brazilian president Jair Bolsonaro is facing five inquiries, four in the Supreme Court and one in the Higher Electoral Court.

The investigations center on his possible involvement with the Federal Police, an alleged lie regarding irregularities in negotiating for the Covaxin vaccine, attacks on electronic voting machines, and the leaking of confidential data to the Federal Police.

“Bolsonaro’s government has repeatedly pushed for initiatives and spread information that was disastrous, like not accepting social distancing, the president not wearing a mask, propaganda for and the promotion of ineffective medicine, insecurity in data on contagion and death…”, said Neftali de Oliveira, a professor at the Catholic Pontific University of Río Grande do Sul.

The deputies handed over a document on Oct. 26 approved by the Parliamentary Investigation Committee (CPI), requesting 80 charges, including those against Bolsonaro, for at least nine crimes during the pandemic.

“The investigation in the Senate suggests the idea that the government’s policies were intentional, based on [the government’s] hypothesis that the spread of the virus could have been slowed through ‘herd immunity’. Opinions today reveal that most Brazilians condemn Bolsonaro’s government’s actions regarding the pandemic,” he said.

With these issues, the three Southern Cone nations are facing a complicated, uncertain political panorama, at least for the next few months.