As Korean magic takes over India, more people get drawn towards K-products. 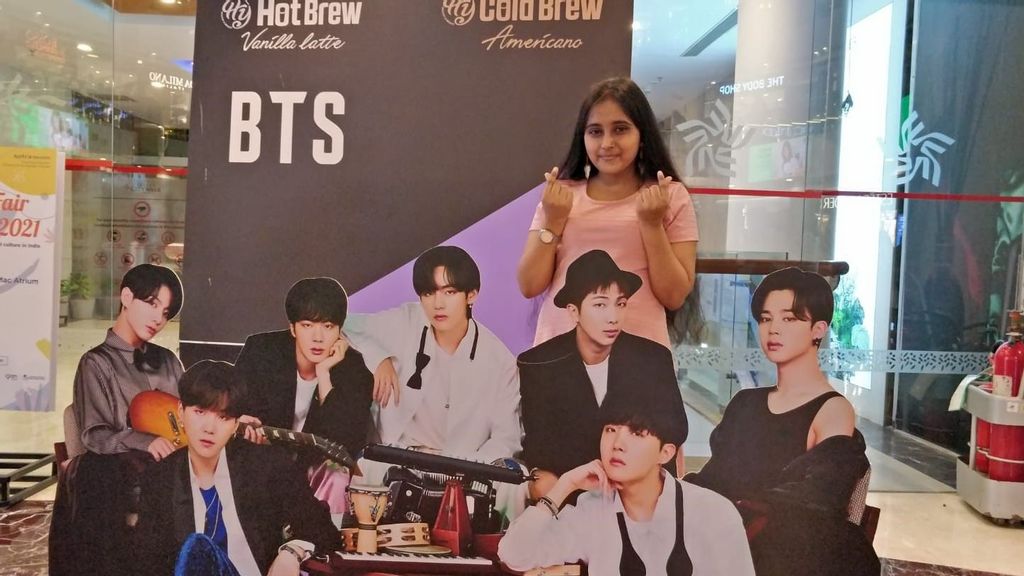 Young BTS fan getting herself clicked with a cut out of the boy band at the Korea Fair in India. (Credit: Toprit Saifi)

DELHI, India — From the mushy romance “Crash Landing on You”, to dystopian survival series “Squid Game”, K-dramas have not only enthralled viewers with their unique storytelling and stellar acting but have also drawn the audience towards Korean culture.

Riding high on the “K-wave,” Korean products have created a niche for themselves in India. From beauty to food and music to language, Indians are increasingly tilting towards all things Korean.

Taking note of this popularity, the Korean Trade-Investment Promotion Agency (KOTRA) organized the “Korea Fair in India” in Delhi from Oct 1-10, 2021.

“The fair was a success, products were quickly sold, and lots of things had to be re-imported to keep the fair running,” said Hanna Kim, Marketing Director, KOTRA.

The K-dramas gained more popularity than before during the pandemic-induced lockdown of 2020 when more people became a part of the K-drama frenzy. As per the data provided by the streaming giant Netflix, the viewership for K-dramas increased more than 370 percent during 2020 as compared to 2019.

It was during the pandemic that Ritika Vaswani, a Delhi-based public relations professional, got drawn towards K-dramas.

“The more I watched the dramas, the more I got attracted to their food,” the 26-year-old told Zenger News.

As the pandemic gloom lifted away and the lockdown was eased, Vaswani visited a Korean restaurant and instantly liked the cuisine.

“At that time, I knew only about Ramyun (instant noodles) and Kimbap (seaweed roll filled with a variety of veggies or meat), so I ordered these two dishes”.

K-food is becoming a rage among Indians.

“The tangy flavor and spices make the cuisine a comfort food for Indians,” said Vaswani, who now wants to try authentic Seaweed Soup and Bulgogi (barbecued beef or pork).

Sangpo Khang, the owner of Korean Busan Restaurant, Delhi, was not wrong when he correctly gauged the influence of Korean culture in 2015 and decided to open a restaurant.

“The restaurant came up with the anticipation of the growing influence of Korean culture in India, especially among youngsters,” he told Zenger News.

Seo Hae Keun, owner of Gung The Palace, a Korean restaurants in Noida, told Zenger News: “Before 2021, we used to get two or three Indian groups in a week, but now we get two-three groups in a day.”

“People who come to the restaurant have basic knowledge of the cuisine,” she told Zenger News.

A furor over boy band, BTS, and its merchandise was also quite evident at the Korean Fair in India, where fans (ARMY) came to purchase BTS coffees, which are available for the first time in India.

One such 26-year-old fan, Rashmi Yadav, who claims herself as the biggest fan of the BTS, came to the fair exclusively to buy the coffee on her way back home from the office. She works in Gurugram as a hygiene executive.

She said she received a lot of queries for other BTS merchandise as well, including BTS Photocards, Posters, Albums, and Army Bombs (light stick). The company sold 7,000 coffee units during the Korean Fair in India.

Not just the dramas and music but the desire to learn Korean language has also shot up. The popularity of the language is evident from the fact that “1,200 slots for a 3-month-long course which was started by the Korean Cultural Centre India last year were filled within 2-3 minutes after opening the registration,” Hwang Il-Yong, director of Korean Cultural Centre India, told Zenger News.

K-dramas protagonists’ impeccable fashion sense and glass-like skin, too, are making people fall for them.

“Physically, they are very pleasing to look at with their focus on minimalist and classic aesthetic,” Delhi-based Sumaiya Nasir, who is a big fan of K-beauty, told Zenger News.

She feels K-beauty’s focus on quality ingredients and scientifically research-based formulations make the products effective. Some of her favorite brands include Belif, Klairs, Cosrx, Sulwhasoo, among others.

“I use specific products from different Korean brands and have a minimalist approach,” said the 34-year-old working with an NGO.

As per Amazon, the platform offers more than 300,000 products from top brands like The Face Shop, Innisfree, Laneige, and Mirabelle, among others. “However, The Face Shop and Innisfree are the most popular brands among our customers,” said Mehta.

Offering a variety of ranges for every skin type at different price points, Innisfree has quickly become a popular brand among youngsters.

“Most of our customers are in the age bracket of the early 20s to late 30s,” Mini Sood Banerjee, Assistant Director & Head of Marketing at Innisfree, told Zenger News.

“What draws customers to K-beauty is that it is used for preventive care instead of reactive care,” Mrunmay Mehta, Head, Beauty, Grooming and Luxury Beauty, Amazon India, told Zenger News.

According to the data provided by Amazon, the e-commerce platform has observed a growth of more than 2X in the K-beauty category in the last year. The most sold products include creams, serums, sheet masks, aloe gel, body lotions, lip tints, shampoo and conditioners.