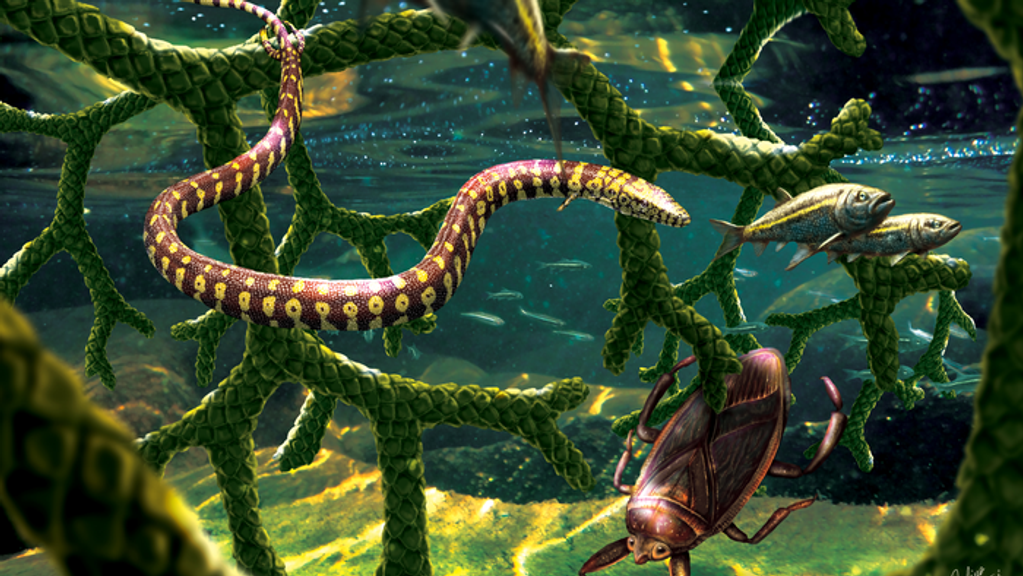 In an artist's concept featuring the shallows near the shore during the Cretaceous period (145-66 million years ago), Tetrapodophis amplectus glides through a tangle of branches from the conifer Duartenia araripensis, which has fallen into the water, sharing this habitat with a water bug from the Belostomatidae family and a small fish (Dastilbe sp.). (Julius Csotonyi)

A fossil once thought to be a snake with four legs, connecting lizards and early snakes, is not the missing link scientists had hoped for.

Published in the Journal of Systematic Paleontology, a study led by paleontologist Michael Caldwell of the University of Alberta disputed the findings of a team of researchers that reported their discovery of what they believed was the first known example of a four-legged snake fossil. They dubbed it Tetrapodophis amplectus in their study published in the journal Science in 2015.

“It has long been understood that snakes are members of a lineage of four-legged vertebrates that, as a result of evolutionary specializations, lost their limbs,” said Caldwell. “It has thus long been predicted that a snake with four legs would be found as a fossil.”

The researchers in the original study estimated that T. amplectus was about 10 inches long.

“If correctly interpreted based on the preserved anatomy, this would be a very important discovery,” said Caldwell. “There are many evolutionary questions that could be answered by finding a four-legged snake fossil, but only if it is the real deal. The major conclusion of our team is that Tetrapodophis amplectus is not in fact a snake and was misclassified.”

He pointed out that all aspects of its anatomy are consistent with dolichosaurs: a group of extinct marine lizards from the Cretaceous period (145 to 66 million years ago).

According to the new study, the anatomy and morphology of T. amplectus were mischaracterized by the earlier research as resembling those of snakes.

Caldwell said he had found clues in the rock where the fossil was found that led him to his conclusion. “When the rock containing the specimen was split…the skeleton and skull ended up on opposite sides of the slab, with a natural mold preserving the shape of each on the opposite side,” said Caldwell.

He noted that the original study had only described the skull and overlooked the natural mold, which had preserved features that made it clear that “Tetrapodophis did not have the skull of a snake — not even of a primitive one.”

Although the specimen is not the long-sought missing link, Brazilian paleontologist at Harvard University and co-author Tiago Simões said, “It is one of the smallest fossil squamates ever found … comparable to the smallest squamates alive today that also have reduced limbs.” Squamates, or scaled reptiles, include snakes, lizards and worm-lizards distinguished by the hard protective scales on their hides.

The specimen, currently held at the Bürgermeister-Müller-Museum in Solnhofen, Germany — north of Munich — has also attracted attention over its removal from Brazil. It was originally held in a private collection, and the appropriate permits were not issued for its removal, according to Simões. Removing fossils from Brazil has been illegal since 1945.

“In our redescription of Tetrapodophis, we lay out the important legal status of the specimen and emphasize the necessity of its repatriation to Brazil, in accordance not only with Brazilian legislation but also international treaties and the increasing international effort to reduce the impact of colonialist practices in science,” Simões said.

«Previous Post
It’s A-maize-ing: Popcorn Is A New, Sustainable Insulation On The Market»Next Post
Social Unrest, Allegations Of Corruption Could Bring Down Presidents Of Argentina, Brazil And Chile