Overcoming his own homelessness and addictions, Donald Whitehead is at the forefront of a movement to make housing a human right.
By Kevin Michael Briscoe November 18, 2021
Facebook
Twitter
Linkedin
Email 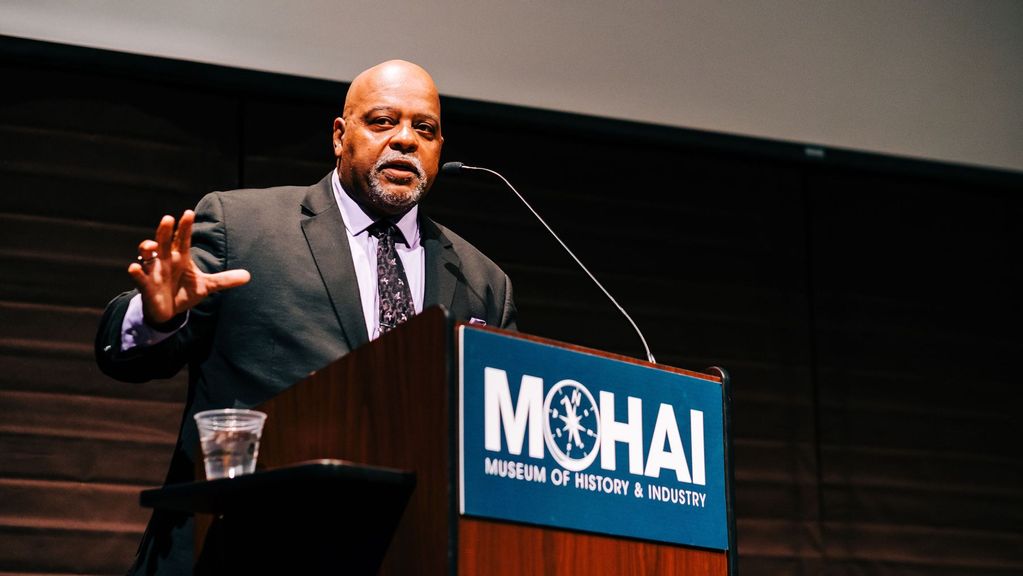 Donald Whithead, executive director for the National Coalition for the Homeless, has experienced being without a home twice in his life. (Courtesy Donald Whitehead)

Over the course of 26 years being clean and sober, Donald Whitehead has carved out a name as a top advocate to end homelessness in the United States. Twice homeless himself and addicted to drugs and alcohol at a very young age, the executive director for the National Coalition for the Homeless is at the forefront of a new effort to a make affordable housing a “human right.”

“In essence, we are a collective of agencies, individuals and people who themselves have experienced homelessness that work together to organize around [this] issue,” Whitehead said of the Washington-based organization he heads. “Our first principle of practice is that homeless people should be in leadership positions in all the work that we do and be the ultimate solution to homelessness.”

He added that 80 percent of the National Coalition for the Homeless staff and 60 percent of its board of directors are formerly homeless.

The Journey to the Streets and Back

As a kid, Whitehead was forced to “double-up” with numerous aunts and uncles and five siblings at his grandparents’ home in his native Cincinnati. Despite the challenges of living with 20 or so people in a single-family unit, he said that he managed to carve out a pretty good life.

“My mom worked in the education system, so we all did well educationally,” Whitehead said. “I was voted most likely to succeed, prom king, and I played football and basketball. I had all the trappings of success, but I started using [drugs] at a very young age. And, for the most part, I was a functioning addict.”

Brief stints at both the University of Cincinnati and in the Navy left Whitehead with too much time and opportunity, giving his addictions (“mostly alcohol at that time”) a chance to take hold of him body and soul.

“I eventually left the Navy — not by my choice — went back to Cincinnati and started living the American Dream,” he said. “I had pretty decent jobs as a restaurant manager, car salesman and environmental activist with Greenpeace. But, then I started experimenting with other substances, and, in the end, I was overwhelmed to the point where I got a divorce. I ended up in my sister’s basement and then my brother’s spare bedroom and then another brother’s third-floor apartment.

As is the case with many addicts, Whitehead “finally ran out of relatives” and found himself living in shelters, abandoned buildings and even the back seats of cars.

But, after six months in a treatment facility, he began his new life’s work.

“In order to get into the program, I had to do community service, and that was with the Greater Cincinnati Coalition for the Homeless,” Whitehead said.

Blacks Most at Risk

Whitehead asserts that homelessness boils down to two basic factors: lack of affordable housing and poverty.

“There are a lot of other factors that play a role in people becoming homeless, but those themselves are not the reason for homelessness,” he said. “Sure, there’s substance abuse, mental health issues, issues of domestic violence, which is very prominent among women in the homeless community. But really the issue is a lot of structural issues that started 60 or 70 years ago that we’ve not fully addressed, and that is most common when we talk about people of color.”

The State of Homelessness 2021 Edition, released by the National Alliance to End Homelessness, highlights these structural issues.

“As with so many other areas of American life, historically marginalized groups are more likely to be disadvantaged within housing and homelessness spheres,” the report states. “Higher unemployment rates, lower incomes, less access to healthcare and higher incarceration rates are some of the factors likely contributing to higher rates of homelessness among people of color.”

Racially driven real estate practices (commonly called redlining), as well as urban renewal plans that wiped out entire black neighborhoods, bear some blame for the discrepancies but so does the lack of support for returning military veterans, Whitehead said.

“The inability to access housing has created a tremendous wealth gap in this country,” he said. “Most people of color experience ‘network poverty.’ Because of this lack of wealth generation, which has been an intentional policy of the federal government, many people of color don’t have that network to rely on to support them when something traumatic happens.”

Whitehead and his National Coalition for the Homeless team recently launched Bring America Home Now, which its website describes as “a comprehensive grassroots campaign to end homelessness in the United States” through a cross-sector group of national and community-based partners. There are now more than 50 partner organizations involved in the effort.

“[We are] proud to join the ‘Bring Home America Now’ campaign spearheaded by Mr. Whitehead and our longtime partner, the National Coalition for the Homeless,” said Deborah De Santis, president and chief executive officer for the Corporation for Supportive Housing. “The campaign is notable for bringing together a diverse array of stakeholders &mldr; and aligning grassroots support around housing, health, education, racial equity and employment to scale resources to address this national issue.”

The initiative, said Whitehead, has both short- and long-term goals.

“We’re looking at things that have to happen right now, like protecting people from criminalization, doing a better job of planning for discharges from hospitals, foster care and mental health facilities,” he said. “But we’re also looking down the road. We have to make housing a human rights issue, we have to provide the income that supports people with the ability to stay in their housing, and we have to do a better job with health care in this country.”

U.S. President Joe Biden’s Build Back Better bill is directing historic funding to housing issues, including $24 billion for housing vouchers, with $7.1 billion earmarked for the homeless and victims of domestic violence; $1 billion for rental assistance and $65 billion to repair and renovate public housing units.

“We have seen historic dollars coming out of the Biden administration through Build Back Better,” Whitehead said. “This housing funding is at levels we haven’t seen since the New Deal. But we’re looking to build on that.”

“The Build Back Better housing provisions are a significant first step in an unprecedented commitment by the federal government towards ending homelessness,” said Segal, a former legislative assistant to the late Rep. John Conyers (D-Mich.). “An expansion of Section 8 vouchers is going to help scores of working families and the physically and mentally challenged stuck in homeless shelters.

“However, on any given night, there are over a half-million homeless people without a place to call home. While most are individuals (70 percent), the rest are families with children, which is a national disgrace.”

Segal added that homeless people who don’t qualify for Section 8 are forced to sleep in hotels, bus stations or in temporary living conditions that can often be unsafe.

«Previous Post
Shawn Porter Hopes What Happens In Vegas Results In A Championship»Next Post
Report: How Scammers Rip Off Communities Of Color