Shawn Porter Hopes What Happens In Vegas Results In A Championship 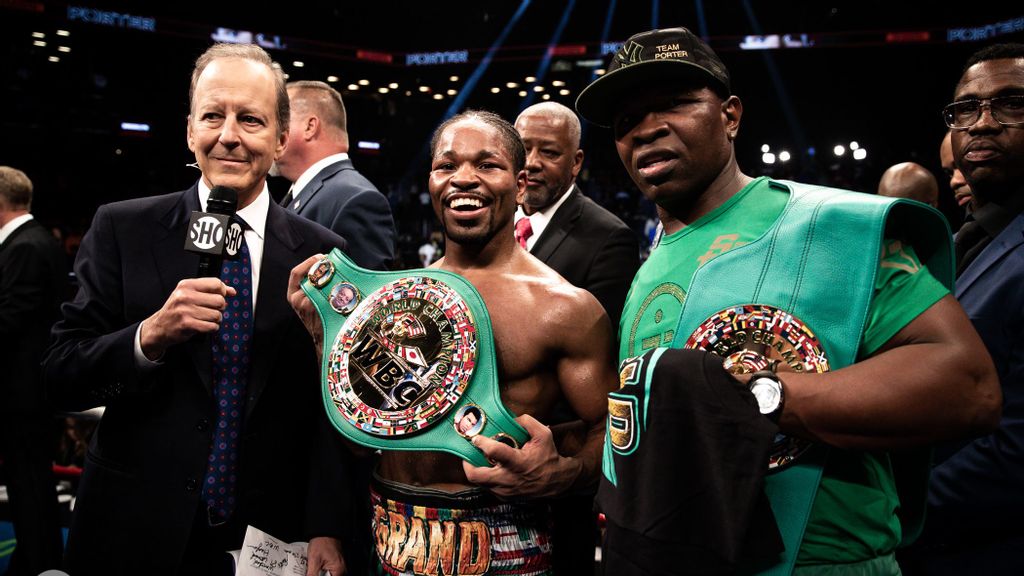 Resilience. That’s the word Shawn Porter‘s close friend used to describe him at a September athletic banquet during which the former football running back was inducted into the Stow-Munroe Falls High School Hall of Fame in his native Stow, Ohio.

“My little brother — not by blood — Nathan Bower Malone used the word ‘resilience’ to introduce me when he gave me the award,” recalls Porter, a 2005 graduate who broke the school’s all-time rushing record previously held by NFL Hall of Famer Larry Csonka.

“Nathan said that I’ve ‘always exhibited resilience that has helped to shape him into a young man.’ I’ve always had a resilience as a fighter and as a human being that is really unmatched. I personify that word when you see me in the ring.”

A two-time welterweight champion who has displayed unparalleled staying power at 147 pounds, Porter (31-3–1, 17 KOs) has rebounded from losses against A-list competition to remain at the top of the division.

On Saturday night, he will clash with switch-hitting three-division and WBO champion Terence Crawford (37–0, 28 KOs) on ESPN Plus Pay Per View from the Michelob ULTRA Arena in Las Vegas.

“I’ve been pushed to limits multiple times, and I’ve answered every single time, where I don’t think Terence has been in the ring with enough quality that can push him to some limits,” Porter said. “I’ve had the experiences required to get the job done and be that first guy to do it against Terence Crawford. When you turn it on, and you make adjustments, you’re winning rounds and ultimately trying to hurt Terence and put him in vulnerable positions.”

After overcoming majority, unanimous and split-decision losses to former and current champions Kell Brook (2014), Keith Thurman (2016) and unbeaten southpaw IBF/WBC titleholder Errol Spence (2019), Porter believes he can be the first man to knock out Crawford.

“I do believe that I have the power to knock him out, and we’ve been working on and focusing on that. I believe we have some tricks up our sleeve that will open up that clean shot that we need to stop Terence Crawford,” Porter said. “Although it would guarantee me victory, I’m not so much concerned with knocking him out. I’m not interested in controlling and dictating the tempo of the fight.”

The apple doesn’t fall far from the tree if you ask Porter, who is trained by his father, Kenny Porter.

“That’s where my resilience comes from,” Porter said of Kenny, who became a father at the age of 18 and instilled structure born of having to overcome a fatherless childhood in a drug-infested neighborhood.

“My dad had such a hard upbringing that he acquired a level of resilience that is immeasurable. My dad pushed all of that onto me. In truth, my dad may not have an understanding of just how much resilience he’s passed on to me.”

Kenny Porter was raised by a mother whose lifestyle often left her two young sons unattended. During one of those times, 4-year-old Kenny and 3-year-old James went searching for her, resulting in his sibling’s death as a result of a hit-and-run car accident.

“That caused my dad to parent, teach and coach resilience into me,” Porter said. “I can personally tell you that the things my dad went through as a child have always been with him.”

The Porters’ homes are fewer than 100 yards from each other in Las Vegas, where their bond continues to be strong.

“Shawn and I have an unbreakable bond of trust, love and respect,” Kenny Porter said. “I learned at a very young age, due to my upbringing, not to trust most people.”

“Shawn was my birthday present. I’ve always thought Shawn looked like and reminded me of James, being that little brother I lost at a young age,” Kenny Porter said. “We’ve done a lot of things like friends and brothers rather than father and son, like traveling or playing basketball together and going on dates.”

It is that bond that Shawn Porter believes will guide him to victory over the switch-hitting Crawford.

“My dad created this rule that when someone switches, you jump on them and not allow them to adjust to fighting in the other stance,” Porter said. “I’ve been handling that my whole life, when guys want to go from counter-puncher to being aggressive. I’m prepared for everything that Terence Crawford is gonna bring.”

Porter’s reign as WBC champion began in December 2013 with a unanimous decision that dethroned left-handed IBF champion Devon Alexander. Porter’s first defense was a two-knockdown, fourth-round stoppage of two-division champ Paulie Malignaggi in April 2014 before he lost to Brook that August.

“Showtime” is 7–2 (2 KOs) since his loss to Brook, a run that includes rising from a 12th-round knockdown to complete a unanimous decision victory over four-division champion Adrien Broner in June 2015, his loss to Thurman in a “Fight of The Year” contender, and a three-knockdown, ninth-round stoppage of two-time titleholder Andre Berto in April 2017.

“Take a look at any of my fights, and you’ll see the versatility that I have, and Terence hasn’t been in the ring with that. It’s hard to adjust to that on fight night. My experiences on top of my skills makes me the guy,” Porter said.

“Terence has a rhythm, and I live in disrupting rhythm and what makes you uncomfortable. When I see how he likes to move, and I start to not allow him to move that way, he’s gonna get uncomfortable, and it’s going to start to fester mentally and emotionally and show up in the fight.”

Porter became a 147-pound world champ for the second time with a unanimous decision victory over two-division champion Danny Garcia for the WBC’s version in September 2018. Porter won that fight despite being denied the full complement of sparring due to an injured left hand that he damaged in the sixth round of a unanimous decision victory over Adrian Granados 10 months earlier.

“After my fight with Adrian Granados, X-rays showed that my bone was bruised, and the muscles were stressed. Just before my fight with Danny Garcia was announced, I got back training. We monitored the hand the whole way,” said Porter, whose only WBC defense was a split-decision victory in March 2019 over current WBA champ Yordenis Ugas.

“It was not the typical training camp, but I was able to do some things from a mental standpoint to keep everything together and to not be denied the WBC title. I felt in control of myself and of the fight. I had my mind set on having fun, not rushing, and being sufficient, and I feel like I accomplished all three of those components upon winning my title.”

Porter’s has gone 1–1 over his past two fights, which include the loss to Spence, who added “Showtime’s” WBC crown to his IBF version, and a unanimous decision victory over previously unbeaten Sebastian Formella (August 2020).

“Tank Davis was very fast and sharp, and that speaks well of him going into his next fight. I’m interested in what wins me the fight against Terence Crawford. That means controlling the distance, controlling the tempo and controlling the rhythm of the match,” Porter said.

“What I gained from sparring Davis was good looks to be able to make some adjustments, timing and hand-eye coordination in terms of seeing Terence’s rhythm and his speed and being able to defend him. Terence Crawford has never been in the ring with a fighter as confident, poised and excited as I’m gonna be on fight night, and that is a problem for him.”