Market worker Felipe had to travel three hours a day on the bus just to get to college and then get back to do his day job.
By Julio Guzmán November 17, 2021
Facebook
Twitter
Linkedin
Email 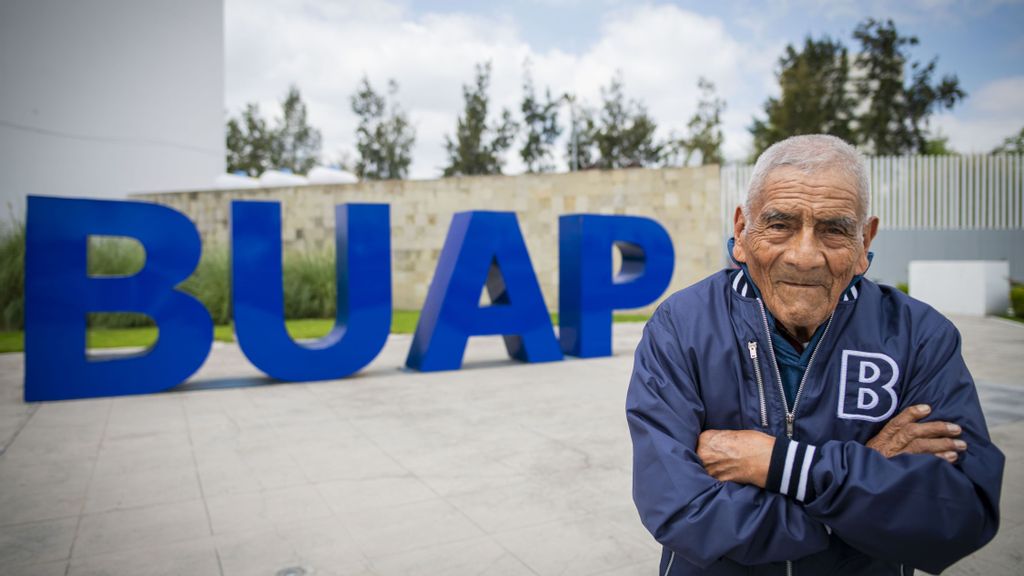 At 84, Mr. Felipe Espinosa, a produce vendor, managed to graduate as an engineer from a Mexican university. (Courtesy of BUAP)

It is never too late to achieve one’s dreams. At 84, Mr. Felipe Espinosa Tecuapetla, a produce vendor in a market at Puebla, Mexico, graduated in Processes and Industrial Management Engineering from the Benemérita Universidad Autónoma de Puebla (BUAP).

Motivated by people around him and inspired by his eldest son — also an engineer — Mr. Felipe enrolled in the university in 2016, at 79. He is the oldest student the university has registered so far. His experience in an electrical and welding workshop and some knowledge in construction gave him the confidence to move ahead professionally.

“I thought there were older people at the university. But I was the only one,” Espinosa told Zenger.

“Many people told me, ‘You should study.’ When the university opened enrollment, I said, ‘I’ll go for it.’ It was easy for me: I wanted to study; I am a patient person, and I pay attention.”

Mr. Felipe had to travel 3 hours by bus every day, from his house to the campus and back, but the length of those trips did not hold him back. He would get up very early to go to the university and later sell his produce at the market.

Héctor Medina Cruz, the BUAP’s engineering department coordinator and a teacher at the San José Chiapa campus, says Mr. Felipe was the first student to arrive at the university and the last to leave. Medina Cruz remembers Mr. Felipe carrying a sack with his supplies and acknowledges he has a much better memory and is more skilled than many young students.

“He is very coherent and connects ideas very well. He was very enthusiastic, arrived on time, never missed a class, and always participated. While young people used tablets and computers to take notes, Mr. Felipe wrote in his notebook,” Medina Cruz told Zenger.

When Mr. Felipe began attending classes, his story went viral. He has a massive following on social media. The photo studio that worked on Mr. Felipe’s graduation pictures uploaded a couple of images of him with his degree on August 30. The post has over 42,000 likes and over 1,700 comments and has been shared more than 44,000 times.

Mr. Felipe finished high school eight years ago. He believes it is essential to continue preparing himself to face the challenges of the contemporary world.

“If you do not have studies, you will struggle more. Some young people have no desire to improve or work; they might not even know what I’m talking about. People must get caught up with 2021; we’re living through critical times. Devaluations, the economy, diseases: people must pay attention to current events,” he said.

Mr. Felipe hopes to find a job with more income. He does not rule out the possibility of becoming a professor or pursuing a graduate degree. The university is willing to support his choice.

“Let’s see if he decides to pursue a master’s degree. We’ll see if we can support him with a scholarship for graduate school. If he decides to work, we’ll try to help him through the career center and the different agreements the university has,” said Medina Cruz.

Mr. Felipe is a widower. He has five children, 10 grandchildren, and two great-grandchildren, all of whom are very proud of him and follow every piece of advice he gives. His grandchildren help him get involved in new technologies and social media. They have learned from him that nothing in life is impossible.

“I am very fortunate to have such a living example. I don’t think anyone else has a grandpa who graduated from college at that age. He’s a source of inspiration … He has taught us to be steadfast when pursuing our goals,” Mr. Felipe’s granddaughter, Erika Pozos Espinosa, told Zenger.

“It seems incredible to me that at his age, he doesn’t want to waste a single moment of his life. He sets a living example that there are no limits to what you can achieve,” she said.

While another opportunity arises, Mr. Felipe holds on to his roots, continuing to work as a vendor, a job he defines as “a blessing.” Today, he says he is grateful for having concluded his undergraduate degree and hopes to inspire people to follow their dreams, regardless of their age or other people’s opinions.

“It’s never too late to learn. When people ask me how old I am, I answer, ‘It’s not my age [that matters], but the desire to move forward.’ What has been basic for me is to work as if I were going to live forever, and that’s what I do. You can achieve whatever you want if you truly want it. I usually tell young people: life is not easy, but you have to give it your all until the last minute,” he said.