Will Gasoline Prices Move Even Higher On Holiday-Driven Demand?

The average retail price of gasoline is stuck at around $3.40 per gallon and several factors help explain why.
By Daniel James Graeber November 16, 2021
Facebook
Twitter
Linkedin
Email 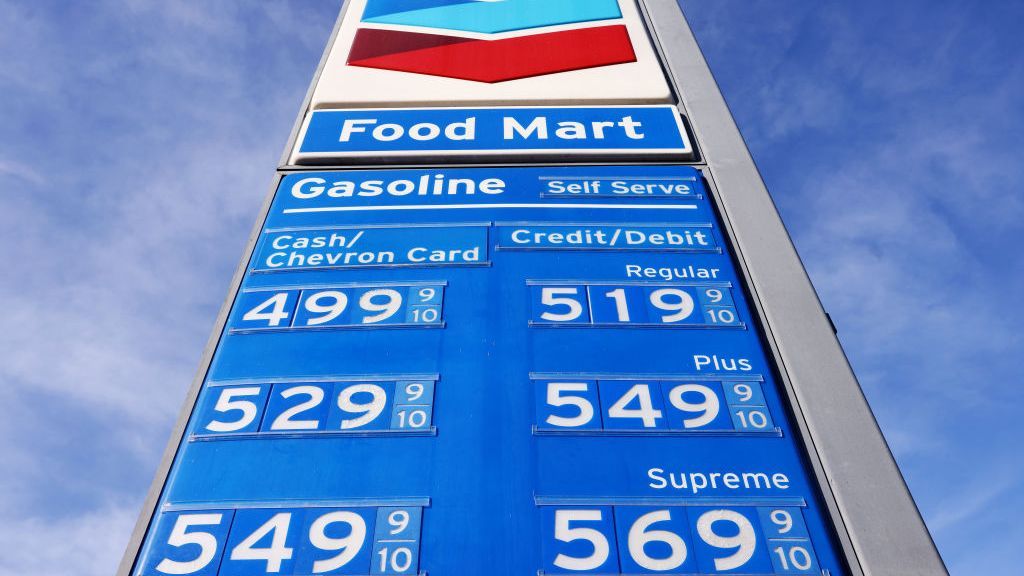 Gasoline prices above $5 per gallon are displayed at a gas station on Nov. 15, 2021, in Los Angeles. According to AAA, the average price statewide for one gallon of regular unleaded gas hit $4.68 Tuesday, an all-time record high. The price spike is being blamed on the increasing cost of crude oil, higher demand, and other factors. (Mario Tama/Getty Images)

Motor club AAA listed a national average price of $3.41 for a gallon of regular unleaded for Tuesday, just a tiny fraction of a percent lower than this time last week. Across the board, commodity prices are hovering at multiyear highs and that’s spilling down to the consumer level. AAA also said the average price in California for a gallon of regular unleaded gas hit $4.68 on Tuesday, an all-time record high.

Andrew Gross, a spokesperson for AAA, said demand might be a bit light ahead of the holiday travel season, but that’s not having any big impact at prices at the pump.

“Unfortunately, the ongoing tight supply of crude oil will likely keep gas prices fluctuating, instead of dropping, for some time,” he said in a statement.

The White House is calling for more oil on the market to help offset some of the pressure. Pleas to the Organization of the Petroleum Exporting Countries have so far been unanswered, leaving the federal government to consider tapping into the nation’s strategic reserves.

President Bill Clinton in 2000 ordered a release from the Strategic Petroleum Reserve to offset high oil prices. While there are several factors behind the price at the pump, gasoline prices dropped 7 percent from the time Clinton made his decision in September that year to December. However, analysts now said the relief might not last that long if a release is approved.

Some lawmakers, are calling for a pause on domestic crude oil exports to keep more product at home for regional refineries. But that might make matters worse, said Jim Burkhard, the head of crude oil markets for consultant group IHS Markit.

“Such a ban would disrupt global oil supply chains, run counter to decades of U.S. policy promoting the free flow of oil and gas, lead to inefficient and costly re-allocation of domestic crude oil production, disrupt supplies for allies and discourage domestic production — which would all put upward pressure on U.S. gasoline prices,” he said in a statement.

And if that’s not enough, S&P Global Platts sees a wide range of factors behind stubbornly high retail gasoline prices. In the Midwest market, there are signs that some of the additives that go into making gasoline are in short supply. The Colonial Pipeline, a key fuels artery for several areas east of the Mississippi River, isn’t working at full capacity either.

“Driving demand has remained strong for a while, at least around the levels of two years ago, but supply constraints keep hampering U.S. gasoline markets,” said Matthew Kohlman, an associate director for refined products pricing at S&P Global Platts.

There could be an uptick in demand next week too if U.S. families shrug off concerns about the increase in new cases of COVID-19. Many families stayed home last year, but with vaccinations available, the situation could return to a relative level of normalcy this year.

That could depend on the consumer reaction to elevated gasoline prices. It was seven years ago that prices at the pump were this high and, with consumer sentiment turning south, travel could be light.

“I’d lean more towards consumers simply saying they’re angry and staying home but not actually,” said Patrick DeHaan, the senior petroleum analyst at GasBuddy. “Will have to see, but for now, gasoline demand has remained strong into the fall.”