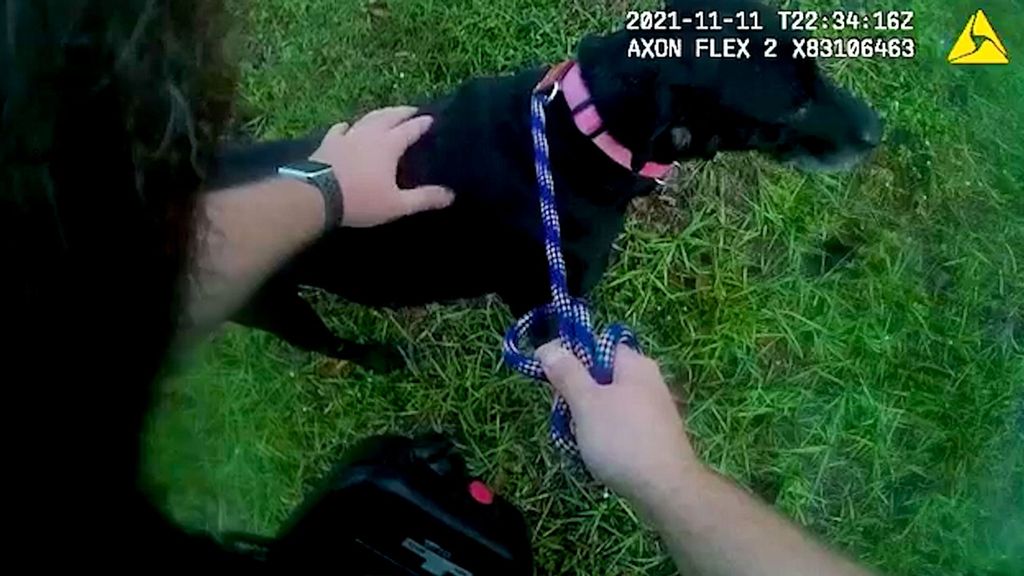 A dog who had been stabbed her in the side by a suicidal man is shown here with a local animal-protection officer shortly before being put in a van to be taken for evaluation by veterinarians. (Volusia Sheriff's Office/Zenger)

A Florida man is undergoing a mental evaluation after stabbing a dog in his care and later threatening suicide.

Video released by Volusia County sheriff’s deputies shows officers rescuing the dog, which had been stabbed in its side by a man looking after it for its owners.

The black Labrador mix, named Midnight, was stabbed by the 36-year-old suspect in the Volusia County town of DeLand, Florida, on Nov. 11.

The suspect then traveled to the nearby Ormond Beach, where he threatened to kill himself, according to the police.

Ormond Beach authorities said they were called to Hampton Inn at around 3:20 p.m. following a report from the crisis intervention hotline about a “suicidal subject.”

Officers “negotiated with the subject, who was in a vehicle holding a kitchen knife, and took him into custody without incident.”

The police said the man, name not disclosed, was “taken into protective custody by the Ormond Beach Police Department under Florida’s Baker Act after a brief standoff in the parking lot” of a hotel there.

The Baker Act allows doctors, mental health professionals, judges, and law enforcement to commit a person to a mental health treatment center for up to 72 hours if they display certain violent or suicidal signs of mental illness. It is named after Maxine Baker, a former state representative from Miami who sponsored the act after serving as chairperson of the House Committee on Mental Health.

While under arrest, the suspect told the police that he stabbed a dog in DeLand, and officers went to check on the animal, who was found to have a stab wound.

Despite that, the dog “was friendly and up and walking around despite her injury,” authorities noted.

Animal Services officers took the dog to a veterinarian, who said Midnight suffered a lung injury, but was in a stable condition.

As the dog was wearing an ID microchip, officers soon determined that the suspect was not its registered owner.

“The owners were contacted and advised they’d recently allowed the suspect to take Midnight home with him,” said authorities.

The owners were “shocked by the attack” and said they would like to take care of Midnight when she is well enough to leave veterinary care, the sheriff’s office said.

The suspect was taken to SMA Behavioral Healthcare in Daytona Beach for a mental health evaluation, authorities said, while Animal Services is working with the State Attorney’s Office to decide on the appropriate charges, which are expected to include animal cruelty.

«Previous Post
VIDEO: Can You Spot Us? Snow Leopard Cubs Go On Show In Their Himalayan-Style Enclosure»Next Post
Too Big To Succeed: Some Conservation Areas In Africa Are Too Large To Protect