VIDEO: Bear-ing Up: Bruin Rescued After Trapping Her Head In A Jar For A Month

Experts believe the animal got stuck when she tried to break into a pet feeder.
By Lee Bullen November 16, 2021
Facebook
Twitter
Linkedin
Email 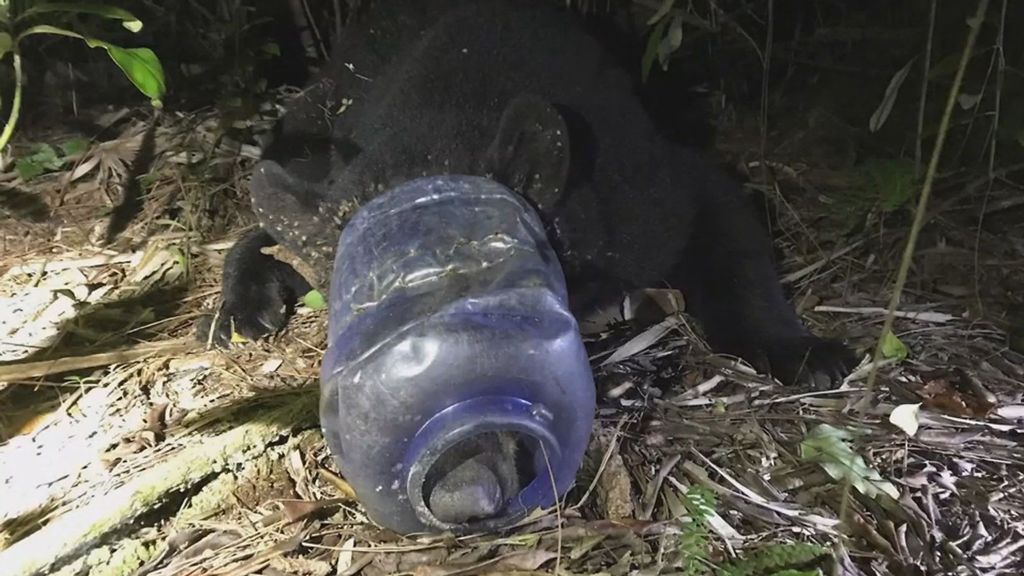 A black bear was trapped with a plastic container on its head in Florida for 28 days before being rescued. (Florida Fish and Wildlife Conservation Commission/Zenger)

Florida officials removed a plastic container from the head of an adult tranquilized bear after the animal got it trapped around its neck for a month.

The female bear was spotted wandering around Collier County, Florida, with the container around its head before eventually being captured. After two initial sightings, the bear vanished for three weeks. It was finally spotted again on a residential security camera in Naples.

The Florida Fish and Wildlife Conservation Commission coordinated with the local police department, bear contractors and bear biologists to free the animal.

A spokesperson for the Florida Fish and Wildlife Conservation Commission said: “Finally, the bear was spotted on a resident’s security camera, still wearing the container on its head! Staff set new traps and started night patrols of the neighborhood. They finally spotted the 250-pound female bear just before midnight.”

The animal was tranquilized, and a bear biologist carefully removed the container. It is believed the plastic object was part of an automated pet feeder that became attached to the bear’s head when it tried to get at the food.

However, since there was a hole at the end, the bear was able to drink during its month-long ordeal. This enabled it to survive, rather than die of starvation or dehydration, according to the Florida Fish and Wildlife Conservation Commission.

“Even after 28 days of wearing it, the bear was still in great physical shape! She did have a wound encircling her neck and face where the feeder was stuck, but staff cleaned the injury and treated her with antibiotics,” the organization said.

“After a day and a half of monitoring to make sure she was healthy and able to eat and drink normally, the bear was released by staff in a secure area of Picayune Strand State Forest,” the Florida Fish and Wildlife Conservation Commission said.

The Florida black bear, a subspecies of American black bear, is found in forested wetlands, natural pinelands and even in swamps in the state. Solitary animals, they only group together during mating season or in families of mothers and cubs. They are known to gather in areas with plentiful food and need to consume around 20,000 calories a day in the lead up to hibernation, which begins in late November. Bears can pick up a scent from a mile away.

A bear’s living space provides food, water and adequate cover; it is called a “home range.” In Florida, average annual adult home ranges for bears are 50 to 120 square miles for males, and 10 to 25 square miles for females.

Because bears often find the needed calories in litter, residents are advised to keep food and garbage covered.