Pilot and passenger rescued from small aircraft in water off of Florida’s west coast. 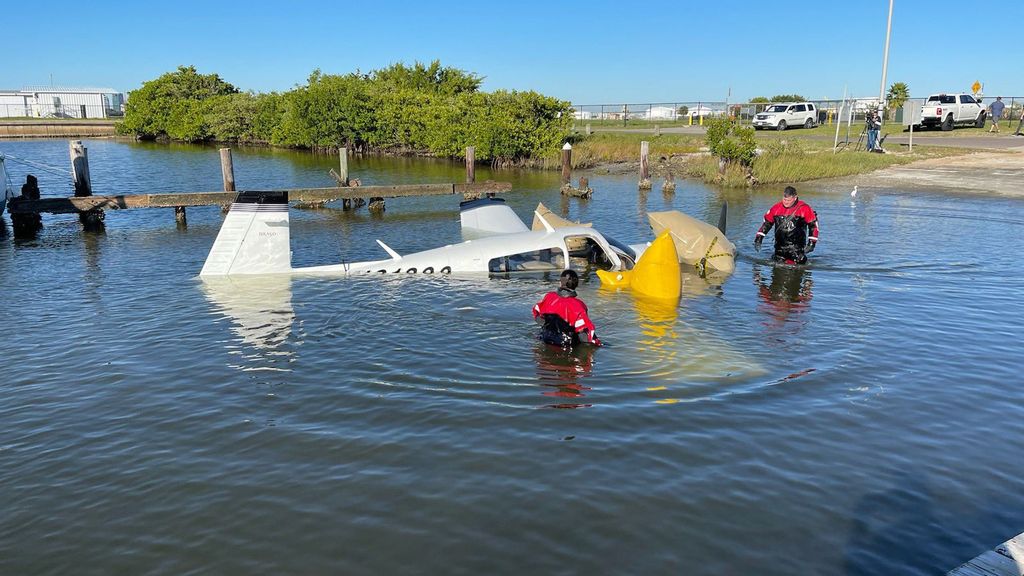 An unidentified aircraft is pulled from Tampa Bay, Florida, on Nov. 15. Two people in the plane were rescued, police said. (Tampa Police Department/Zenger)

The pair, who were not identified, were flying from Gainesville, Florida, to Tampa, according to the Tampa Police Department.

Aviation pilots from the Tampa Police Department captured video of one person being pulled from Tampa Bay by officers on a Tampa Police boat. The condition of the two people was not reported, nor was the type of aircraft identified.

One person wearing a life jacket can be seen in the video swimming toward the police vessel.

The footage, which was shot by the Action Air 1 police unit, then shows the submerged aircraft. The rescue of the second person is not seen in the video.

A photograph posted online shows the aircraft being towed to shore after it was fitted with flotation devices.

In a statement posted online, the Tampa Police Department said: “Our aviation pilots captured the moment two people were rescued after their plane went in the water this morning near Peter O. Knight Airport.

“Tampa police responded to Davis Island at 10:11 a.m. The two were flying from Gainesville to Tampa when they experienced engine trouble.”

The Federal Aviation Administration said the pilot left Lakeland (Florida) Linder International Airport destined for Gainesville Regional Airport and was forced to divert to the Tampa area because of an engine issue.

The agency will lead the investigation to determine the cause of the crash.

Another aircraft accident off the west coast of Florida occurred on Nov. 9 when the pilot of a small PIper plane was forced to make an emergency landing in Sarasota Bay.  The Federal Aviation Administration reported at the time that the plane crashed “for no known reason.” The pilot, who was the only one on board, was not injured, the agency said. The pilot was not identified.

The Federal Aviation Authority, part of the Department of Transportation, issues and enforces regulations and minimum standards covering manufacturing, operating, and maintaining aircraft.

“We certify airmen and airports that serve air carriers. The safe and efficient use of navigable airspace is one of our primary objectives,” the agency’s website says.

The agency’s Office of Accident Investigation and Prevention “is the principal organization within FAA with respect to aircraft accident investigation and all activities related to the National Transportation Safety Board. Our mission is to make air travel safer through investigation, data collection, risk analysis, and information sharing,” the website says.

«Previous Post
VIDEO: Bear-ing Up: Bruin Rescued After Trapping Her Head In A Jar For A Month»Next Post
News Flush! How To Celebrate World Toilet Day