A single tooth from this fearsome megalodon predator is bigger than a man's hand.
By Joseph Golder November 16, 2021
Facebook
Twitter
Linkedin
Email 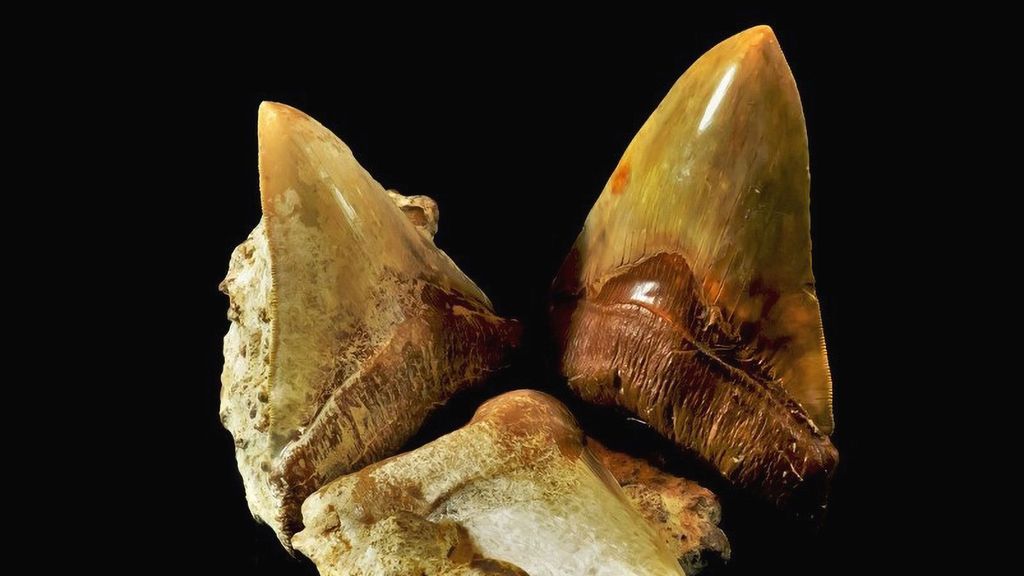 Remains of the extinct megalodon shark, including these huge teeth, were recently found in the Atacama Desert in northern Chile. (CIAHN-ATACAMA/Zenger)

Several giant teeth from an extinct prehistoric megalodon shark have been found in Chile’s Atacama Desert, and a top expert has said that despite treasure hunters pillaging the area, the South American country still has “one of the largest scientific collections of megalodon teeth in the world.”

The discovery of the giant teeth belonging to the prehistoric shark that is believed to have lived between 23 million and 2 million years ago took place in the Bahia Inglesa Formation, located in the Atacama Desert near the Pacific coast of northern Chile.

The megalodon — whose name means big teeth — was “by far the largest shark of all time, a super predator whose length is estimated to be between 16 and 20 meters (52 and 66 feet) long,” said Pablo Quilodran, executive director of the Atacama Paleontology and Natural History Research and Advancement Corp. “In the Atacama region there are extraordinary fossil deposits, and in the case of the coast, there are remains of marine vertebrates from about 8 million years ago (the Neogene period).”

Extensive mining operations and looting by treasure hunters had led to possibly hundreds of teeth from megalodons and other prehistoric artifacts being sold on the black market, said Quilodran.

“Although in Chile fossils are protected by law, for many years one of the most spectacular localities, the Bahia Inglesa Formation, was the victim of destruction by deregulated mining operations and from looting by illegal fossil hunters,” he said.

On a more positive note, he said some looted artifacts have been returned to Chile in recent years, allowing it to build the world’s most impressive collection.

“According to informal counts, we know that hundreds of megalodon teeth were found and sold on the international market. Some of them were returned to the Paleontological Museum of the city of Caldera and the Chilean National Museum of Natural History.

“With this, we undoubtedly have one of the largest scientific collections of megalodon teeth in the world.”

How is it teeth from a marine animal were found in the middle of a desert?

“Because the sea level has changed over millions of years (marine transgression and regression),” the expert said. “This is visible not only in the abundant marine fossils found in sediments today, but also in the geomorphology of this part of the desert, where we can see natural esplanades, which are ancient marine terraces that testify to these different sea levels.

“In short, the sea has receded, but the ground has also risen as a result of earthquakes and subduction of plates, phenomena that we Chileans know and experience so well.”

Such finds are nothing new; English naturalist and evolution theorist Charles Darwin reported having found some megalodon teeth during his trip to Chile in 1835, Quilodran said, while recent discoveries had put the total number of different shark species found in the area to 25.

“In the case of sharks, it is not only Megalodon; we recently found a new sawshark record for the area, which adds up to more than 25 different species of shark that have been found in the sector.”

A lot of these discoveries were apparently due to sheer luck. “Many of these findings are fortuitous and did not respond to systematic scientific activity,” Quilodran said.

But future discoveries will likely be subject to more rigorous planning, due to the recent creation of the Atacama Paleontology and Natural History Research and Advancement Corp.

The implications of the discoveries of megalodon teeth in the Atacama Desert are huge for science, with Quilodran saying: “The unusual abundance of megalodon remains in this part of the desert opens up expectations for new knowledge about many aspects of ancient life regarding this remarkable species of shark.

“For example, what and how did it eat? New estimates of body size, growth speed, whether it was solitary or gregarious, internal temperature and paleo-environmental data, are among many other topics that may be addressed.

“For its part, the Bahia Inglesa site also has an abundance of remains of bony fish, marine mammals, birds and even reptiles, and all the research potential to understand the evolution of a great diversity of different lineages of marine vertebrates is gigantic.”

The recently discovered megalodon teeth will eventually end up in a museum, where the public will be able to view them.

Might the megalodon still exist? No, Quilodran says: “The megalodon became extinct due to possible climatic changes around 2 million years ago.”

Still, it “is always possible to find new species and animals that have gone unnoticed by science, but at 16 meters [52 feet] long, it would be very difficult to have not detected it,” he said.

Despite megalodon being the largest shark of all time, it’s possible an even larger predator of another species preyed on it.

“Megalodon was a super-predator that was possibly at the top of the food chain … however, teeth from another marine vertebrate have been found, this time a super-predatory cetacean that could rival this shark,” Quilodran said. “This cetacean, a relative of sperm whales, is called Leviathan and its fossils have also been found on the Atacama coast.”