N-Ice-A We Have A Breakthrough: How Frozen CO2 Could Help Create Moon Colonies

Solid carbon dioxide on the dark side of the moon could be used in rocket fuel and even steel for construction, say experts.
By Martin M Barillas November 16, 2021
Facebook
Twitter
Linkedin
Email 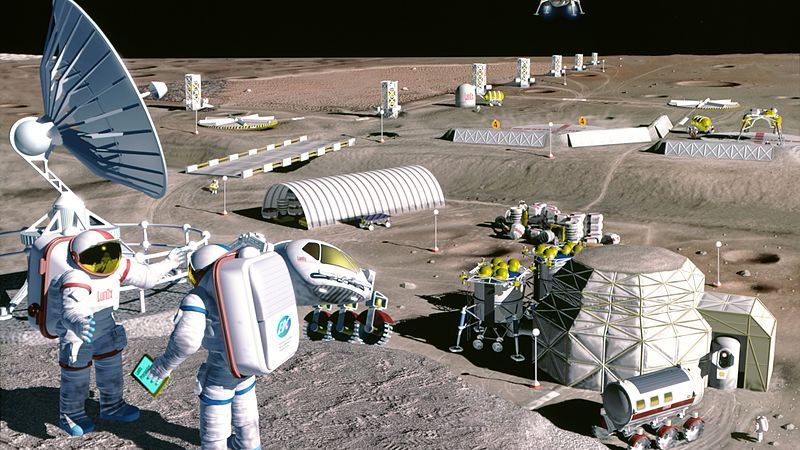 A rendering of an envisioned lunar mining facility where miners harvest oxygen from the volcanic soil of Mare Serenitatis. A new study has confirmed the presence of large carbon dioxide cold traps at the moon's southern pole, which could host frozen CO2, another valuable resource for future missions. (NASA)

Frozen carbon dioxide on the moon may be essential to colonization, scientists say, after the existence of carbon dioxide cold traps on the lunar surface were confirmed.

At the moon’s poles, permanently shadowed regions can get colder than the coldest areas of Pluto, and it has long been theorized that carbon dioxide cold traps could exist there. Frozen carbon dioxide would have numerous beneficial applications in establishing a sustained presence on the moon.

“I think when I started this, the question was, ‘Can we confidently say there are carbon dioxide cold traps on the moon or not?’” said lead author Norbert Schörghofer of the Planetary Sciences Institute. He admitted his “surprise” that there are indeed “contiguous regions which are cold enough, beyond doubt.”

Though the cold traps have finally been confirmed and mapped, in a study published in Geophysical Research Letters, the authors caution that still doesn’t guarantee the presence of frozen CO2.

If solid carbon dioxide is found on the moon, future missions could possibly tap it to produce rocket fuel, biomaterials and even steel, the researchers say. In 2020, molecular water was found on the lunar surface, also bolstering confidence in the sustainability of robotic and human exploration and colonization.

Scientists analyzed more than a decade of temperature data from the Diviner Lunar Radiometer Experiment, which is aboard NASA’s Lunar Reconnaissance Orbiter. The cold traps researchers identified included several pockets at the moon’s southern pole covering an area of about 79 square miles. The largest expanse at 32 square miles was found in the Amundsen Crater. The temperature there is about minus 352 degrees Fahrenheit.

The cold traps can keep carbon dioxide in a solid state even during the rising temperatures of the lunar summer. The study of lunar carbon dioxide and other potential volatile organics, chemical elements and compounds that can be readily vaporized, may help researchers to probe the origin of water and other elements on the moon.

Now that the traps have been confirmed, international policy decisions will have to be made regarding lunar resource extraction, and continued study. Because of the potential uses, the presence of carbon dioxide cold traps has attracted both private companies and governments, researchers say.

“These should be high-priority sites to target for future landed missions,” said Paul Hayne of the University of Colorado, who was not involved in the study. “This sort of pinpoints where you might go on the lunar surface to answer some of these big questions about volatiles on the moon and their delivery from elsewhere in the solar system.”