VIDEO: Can You Spot Us? Snow Leopard Cubs Go On Show In Their Himalayan-Style Enclosure 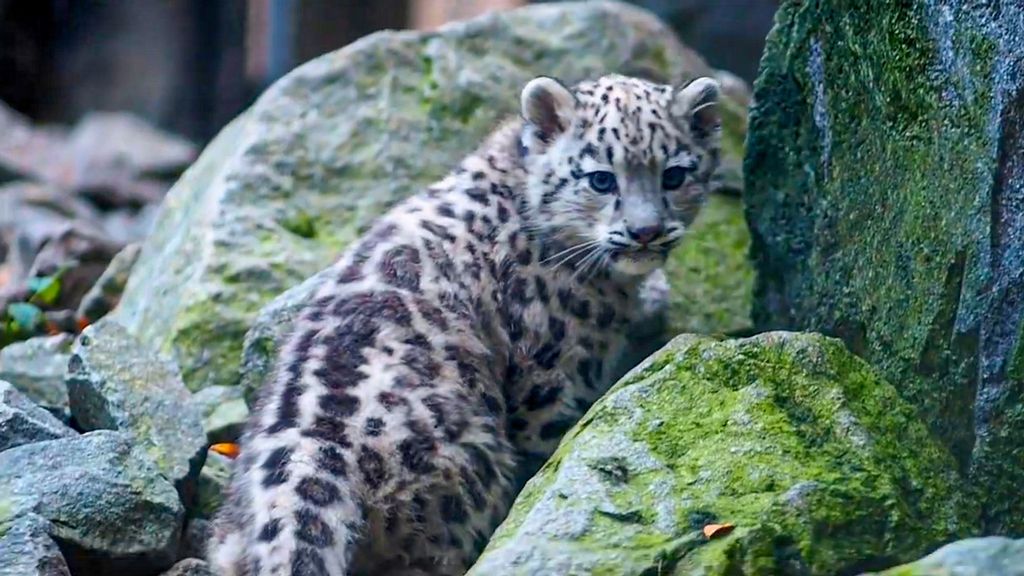 One of the two snow leopard cubs recently born at the Leipzig Zoo in Germany. (Zoo Leipzig/Zenger)

Two female snow leopard cubs are seen by the public for the first time at a German Zoo under the watchful eye of their mother. They have been named Mira and Suri, after the zoo received more than 3,000 online name suggestions from fans.

The two were born August 25 at the Leipzig Zoo.

The zoo said the zookeepers chose Mira, “which means the ocean in India and goes very well with the blue eyes of the little snow leopard.”

The zoo said Mira’s sister Suri “received an Indian name, which translates from Sanskrit as the flower.”

The snow leopards, seen in footage shot Nov. 12, made their first foray into the “mountainous” Himalaya enclosure the zoo built in 2017.

They are being watched over by their mother Chandra, 6, and their father Askar, 5. The zoo said both parents “always keep an eye on them on their excursions and are very vigilant when their offspring take their first steps on the rocks.”

The two young leopard cubs take in their surroundings as their parents give them encouraging licks on their foreheads.

The footage shows the cubs eventually climbing over the rocks with confidence and agility.

Solitary and elusive, snow leopards endure various threats to their survival, including habitat loss due to climate change and hunting. They often fall victim to the illegal wildlife trade, as the animals are killed for their fur. Their body parts and bones are also used in traditional medicines. The species is also killed by farmers because they prey on livestock, such as sheep, goats, yak calves and horses.

The births in the Leipzig Zoo come amid the sad news, announced on Facebook on Nov. 13, that three snow leopards, which are listed as vulnerable on the International Union for Conservation of Nature’s Red List of Endangered Species, have died at a Nebraska zoo, “due to complications from COVID-19.”

The Lincoln Children’s Zoo in Lincoln, Nebraska, said in a statement on Oct. 13 that some of its Amur tigers and snow leopards had tested positive for COVID-19.

The zoo said snow leopards Ranney, Everest and Makalu were “beloved by our entire community inside and outside the zoo,” adding the loss was “truly heartbreaking.”

The Snow Leopard Trust estimates there may only be between 3,920 and 6,390 snow leopards left in the wild.