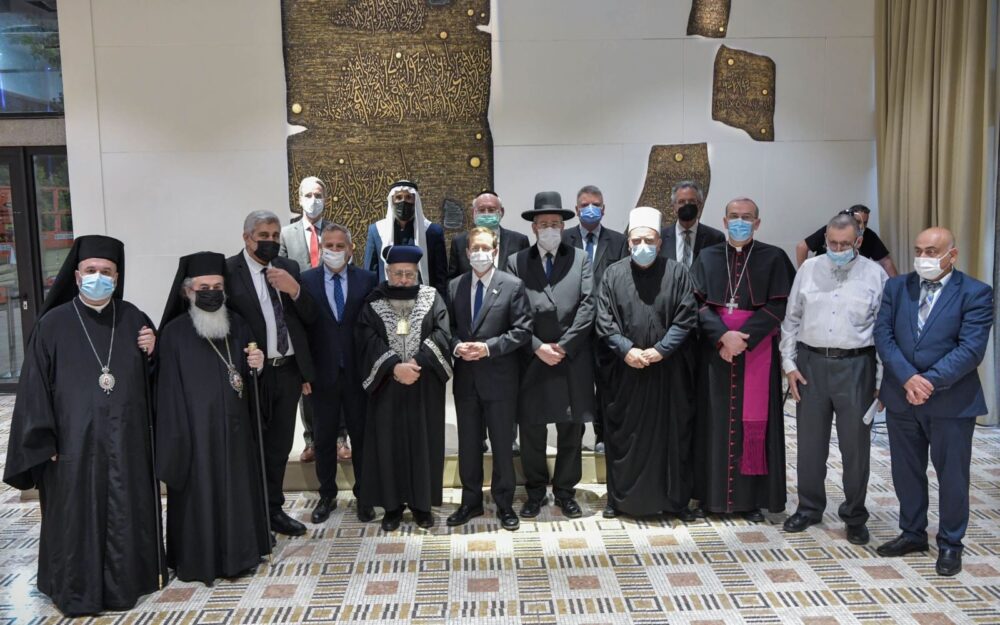 Leaders of religious communities in Israel gathered at the president’s residence in Jerusalem recently to issue an interfaith call for people to get vaccinated against COVID-19.

President Isaac Herzog was joined by Israel’s chief rabbis, the Greek Orthodox Patriarch of Jerusalem, the Latin Patriarch, the president of the Muslim Shari’a Court of Appeals, the Druze community leader and the secretary-general of the Baháʼí movement in Israel, as well as the health minister and the government’s COVID coordinator.

“The sanctity of life is a supreme value for religions and the saving of the life of any human being — all created in the image of God — is the greatest religious obligation of all,” the religious leaders declared.

“Together with prayers to the Almighty, we call on everyone to be vaccinated as soon as possible. The licensed vaccines that have been approved by the most important professional regulatory bodies in the world are highly effective and safe, proven by the notable number of over 3 billion vaccinated people worldwide, and have led to a drastic reduction of COVID-19 infections.”

They concluded by calling on everyone “to continue abiding by all the preventive measures demanded by science and medicine, in each place according to the situation.”

“Interfaith cooperation is hugely powerful,” Herzog said “I think that the fact that this fantastic call is coming out of the Holy Land truly sets an example and serves as a model.”

This week, Israel is poised to roll out a vaccination campaign for children ages 5 to 11.

A recent study, based on data from Israel, showed that a third (booster) dose of the Pfizer-BioNTech vaccine against COVID-19 is 93 percent effective in protecting individuals against severe COVID-19-related outcomes, compared with two doses received at least five months earlier.

The study was published in The Lancet on Oct. 29.

“To our knowledge, the present study is the first to estimate the effectiveness of a third dose of an mRNA COVID-19 against severe outcomes with adjustment for various possible confounders, and within subgroups,” state the study authors from Clalit, Bar-Ilan University and Harvard University.

These subgroups include males, females, Arabs, Jews, ultra-Orthodox Jews and people with various preexisting conditions and body-mass indexes. Risks were found to be higher in males and in people 70 and older.

The authors say that despite good results of nationwide vaccination campaigns, many countries — including Israel — experienced a resurgence of COVID-19, dominated by the Delta variant of SARS-CoV-2. This is because the protective effect of Pfizer’s mRNA vaccine wanes over time and especially after six months.

With 63.55 percent of the population fully vaccinated, Israel has had an overall total of 1,336,882 coronavirus cases and 8,140 deaths, according to Johns Hopkins University in Maryland. The recovery rate overall is reported as 99 percent.