A new device assesses blood flow and oxygen in the feet to detect a problem early, while treatment options are still open.
By Naama Barak November 15, 2021
Facebook
Twitter
Linkedin
Email 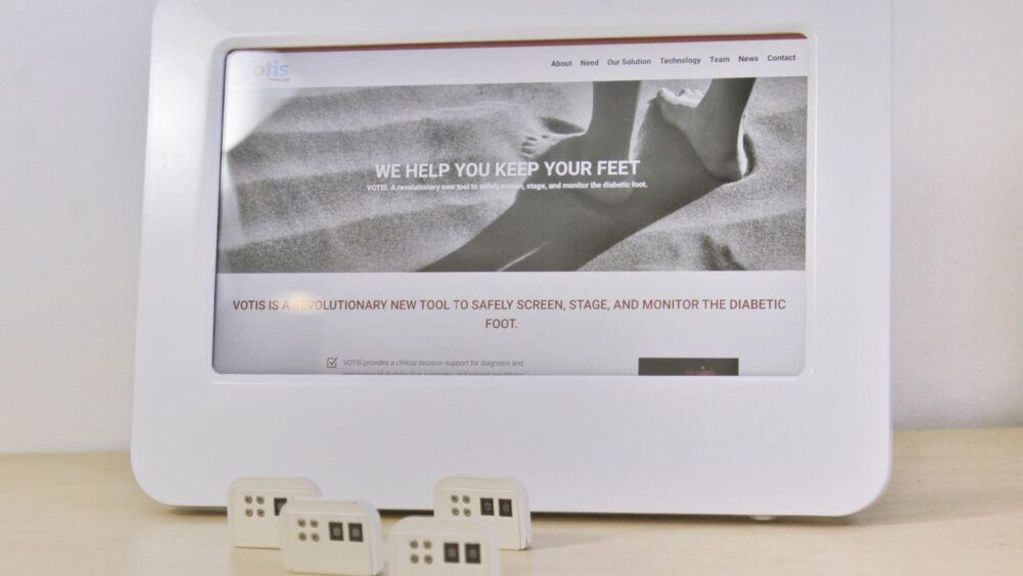 Around the world, some 150 million people suffer from peripheral artery disease. Often prevalent in people who have diabetes, it can lead to a foot condition that in turn can result in foot amputations and even death.

A major problem is that it’s usually discovered only when symptoms appear and treatment options become limited.

This is where Israeli startup Votis steps in. Founded in 2017, the Jerusalem-based company has developed an innovative device that can identify the disease in its very early stages.

“It’s a device to help people with diabetes keep their feet through noninvasive, radiation-free assessment of the blood and oxygen in their feet,” explains Votis co-founder and president Merrill Weber.

“Our system is unique in that it can identify the disease while it’s still asymptomatic, so the patient doesn’t even know he has a problem,” he said.

“It gives the doctors a lot more specific information about the disease and a lot more treatment options because there’s less damage at the time that its discovered,” he says.

“We put patches on the outside of the foot and direct infrared light and near-infrared light into the foot. By measuring the scattering and absorption of the light, we can assess the blood flow and the condition of the oxygen in the hemoglobin in the blood. The whole test takes about five minutes and its noninvasive and doesn’t use X-rays so it’s safe,” said Weber.

“After the information is taken it’s sent to the cloud for processing with AI and is available to the doctor with an app. It will be integrated with the patient’s electronic health records.”

“We have prototype devices, and they’ve been tested on human subjects,” Weber said. “We’re in the process of finishing our beta device and we expect to do medical trials that will get us regulatory clearance in the U.S. and in Europe in the first half of 2022. We expect to release the devices in the US, Europe and India – where the problem is really significant — in 2022.”

A veteran in the world of medical device companies, Weber sought to establish one in Israel after immigrating to the country in 2015.

“I was well aware of the robust technology-transfer system here in Israel and it seemed to me that with a relatively small number of universities and tertiary-care facilities there were a lot of people looking at the different technologies. I figured anything good would have been looked at by other people.”

That’s why he and his wife, a family doctor with decades of experience in the United States, decided to look instead at more than 150 technologies developed at top U.S. universities to find something that could suit their startup idea.

“We found the technology for Votis at Columbia University, and we contacted them,” he said. “They were happy to work with us, and we signed an exclusive license agreement. It’s a good model that other people may want to use.”

While the technology for Votis was developed at Columbia with funding mostly from the American National Institutes of Health, the Israeli company was bootstrapped by Weber and a neighbor.

Earlier this year, the company raised $2.5 million from investors in Israel, Britain, Italy and the U.S., and now boasts a 16-person team working mostly out of its Jerusalem offices.

Weber said Votis has yet to encounter substantial challenges in building its product.

“We have some very bright and experienced people, and we like to measure twice and cut once. So far we haven’t had any major setbacks.”

While there are other companies operating in the field, he believes they cannot deliver the same services as Votis.

“There are other companies that have technologies that can find foot ulcers at the early stage of their formation, but by that time many treatment options are no longer available. We look better and we see better so we give the doctors more treatment options for the patients.”

Weber envisions the Votis device being used widely by doctors and other healthcare practitioners.

“The screening devices should be used by doctors in general practice as well as endocrinologists and diabetes specialists. We’d also like it to be available in health kiosks or big-box stores. It’s designed to be easy to use so it can be administered by a technician.”