VIDEO: You Won’t Believe Your Ice: The Secret Underground World Of The Planet’s Biggest Ice Cave 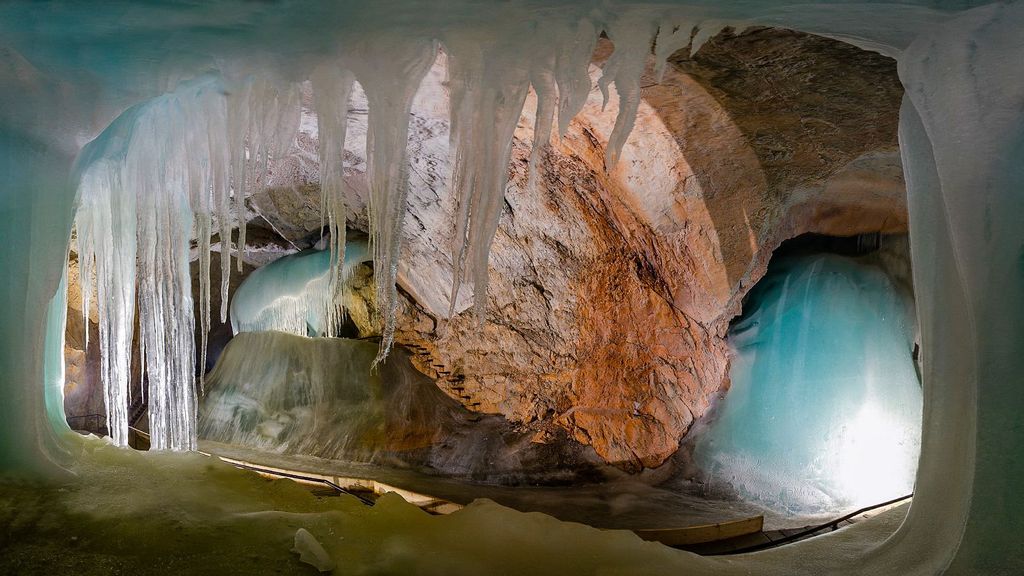 New research has revealed how water once flowed about 460 feet upward to form the “world’s largest ice cave” in Austria, estimated to be between 5 and 10 million years old.

Eisriesenwelt, which means “World of the Ice Giants” in German, is in the town of Werfen, about 25 miles south of the picturesque city of Salzburg, located in the Austrian Alps. A small part at the beginning of the cave system is now publicly accessible.

“You might think that water flows downhill,” said Lukas Plan, a research associate at the Natural History Museum Vienna. “However, research has now shown that the cave system, known for its ice formations, was completely filled with water when it was formed and that it flowed up 140 meters [459 feet] under pressure in the ascending part that is open to visitors.”

Based on comparisons to other caves, researchers say the Eisriesenwelt is believed to be between 5 and 10 million years old.

The study, conducted by Plan, as well as Gabriella Koltai, Eva Kaminsky and Tanguy Racine, was published in the academic journal Die Höhle, which specializes in speleology, the study and exploration of cave systems.

The researchers learned that the giant ice world was completely filled with water at the time of its creation, and that the “so-called flow facets are of particular importance in deciphering the development conditions.”

“These asymmetrical, shell-shaped depressions in the cave wall were formed by water eddies” (swirling currents of water) and these depressions “today provide information about the former direction and speed of flow,” the statement said.

The researchers mapped the flow of the water and their results “showed that millions of years ago about 100,000 liters [about 26,417 gallons] of water per second flowed north-east through the Tennengebirge [mountain range] — that is, 140 meters [459] from today’s cave entrance.”

It is “very likely” that the water came from the “central Alps south of the Tennengebirge, whose fragments of rock in the form of sand and gravel can often be found in the cave,” the statement said. “The Eisriesenwelt is thus the first cave system in the Northern Limestone Alps, for which a former supply by rivers from the Central Alps can be proven.”