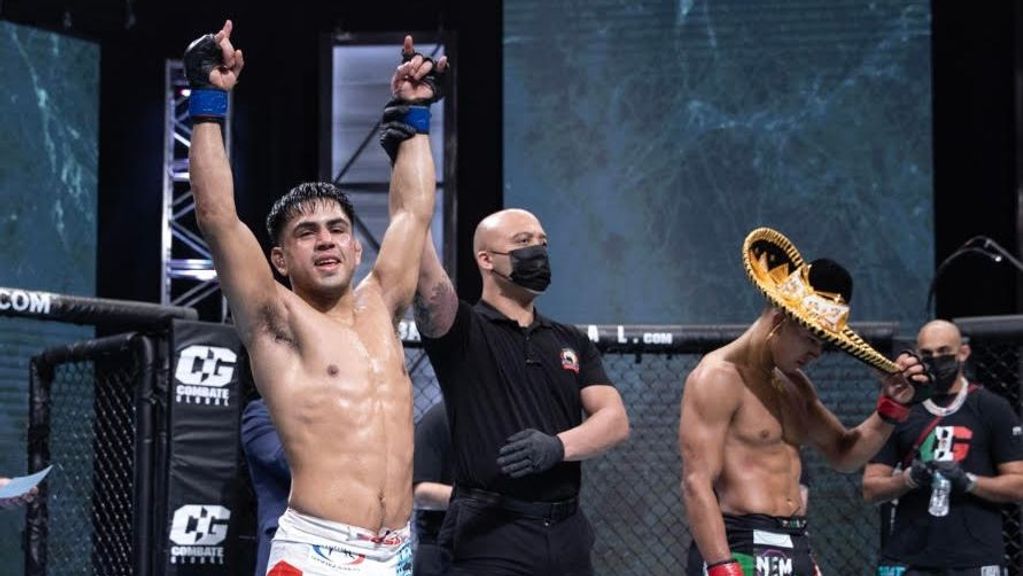 Enrique “Baby Bull” Gonzalez didn’t have the best record heading into Combate Global’s USA vs. Mexico eight-man MMA tournament Friday night in Miami. But he emerged with the biggest heart.

Gonzalez of Laredo, Texas, won three fights in one night, including a grueling three-round decision in the finale over previously unbeaten Cristian “Puas” Perez of Ensenada, Baja California, Mexico.

“It was crazy,” Gonzalez told Zenger after the bout. “It took me back to when I was a little kid at the karate tournaments, but this was a lot different. The competitors are much tougher. I loved it.”

The three wins improved Gonzalez’ record to 12–4. He opened with a one-round decision over Jim “The Beast” Alers of Pembroke Pines, Fla., (14–5) and advanced to face Samuel “Alley Cat” Alvarez (6–5) of Manteca, Calif., where Gonzalez captured another one-round decision.

That earned him the chance to represent the U.S. in the finale against the unbeaten Perez, who looked impressive with a TKO of Alfrego “Tarzan” Ruelas (2–2) of Mexico City in the first round and a tough one-round decision over Patrick “La Sanguijuela” Lehane of Ireland (4–1), who fought for the Mexican team.

The finale was a back-and-forth match with Gonzalez dominating with his ground game early in the first round before being dropped by a hard left hand from Perez in the final minute of the five-minute round. Seconds later, Perez dropped Gonzalez again with a spinning elbow to the jaw. Gonzalez weathered the assault, but lost the round.

“He clipped me a couple of times, but I overcame it,” Gonzalez said. “I knew what I was up against and what I was fighting for. I really wanted the wins on my record.”

Gonzalez followed a similar pattern in the second and third rounds, taking Perez to the ground where he controlled him and applied enough pressure and punishment to capture both rounds on the judges’ scorecards and win the tournament title.

“It’s a tough format because you can’t pace yourself the first two fights,” said Gonzalez’s trainer Mike Valle, owner of Valle Flow Striking Academy outside of Chicago. “You have to go all out. It comes down to skills and stuff like that, but it also comes down to a lot of heart. That mental stage of going out and getting back at it again. It’s very difficult, especially when you have just one round. It’s very little time to go at it.”

Valle said Gonzalez’s ability to recover from the heavy blows he endured in the championship fight was a testament to his conditioning and training.

“He’s a tough kid,” Valle said. “The only way you recover from a situation like that is from the amount of work they put in. We were able to show a little more experience, and we were able to capitalize on the wrestling part of it because that’s what we do a lot of in camp.”

Gonzalez said the key to surviving the tournament was staying calm throughout the night during and between fights.

“I just tried keeping calm even when I was in the ring,” he said. “Each time I went up there after each round, I tried to keep my cool. I didn’t want to get too intense and have my heart rate up and have my adrenaline come crashing down me, so I tried to stay calm the whole time.”

Winning the title should raise Gonzalez’s profile. He moved to Chicago in 2015 to train with Valle after graduating from high school in Laredo and is looking to make a career of MMA. “This puts me in a great spot,” he said. “I know a lot of eyes were watching this. I know it will be good for me.”

He isn’t the only fighter who should benefit from the exposure. The bouts were televised by Paramount Plus and Univision. Combate Global is an MMA promotion that targets a Hispanic audience by featuring young, hungry, and personable fighters. Gonzalez, Perez and Lehane proved they fit that mold.

“I think the last three fights were as good of fights as we ever put on,” Campbell McLaren, the CEO of Combate Global, told Zenger. “I’m terribly impressed with Baby Bull, Puas and Lehane. They went in there with a personality and they don’t back down. For my promotion and the sport and their individual careers those are three stars right there.”

The real star may have been the tournament. McLaren held this event on the same date that UFC 1 launched 28 years ago. McLaren was a co-founder of the UFC and the initial event was an eight-man tournament.

“Seeing guys go through multiple fights in one night is an exhibition of human courage and tenacity,” McLaren said. “The physical side is tough, but the mental aspect is just as difficult. Preparing for one opponent is very different from preparing for three.”