David Benavidez: “Everybody wants to see me against Canelo, right? Or does the big [Jermall] Charlo wanna get it, too?” 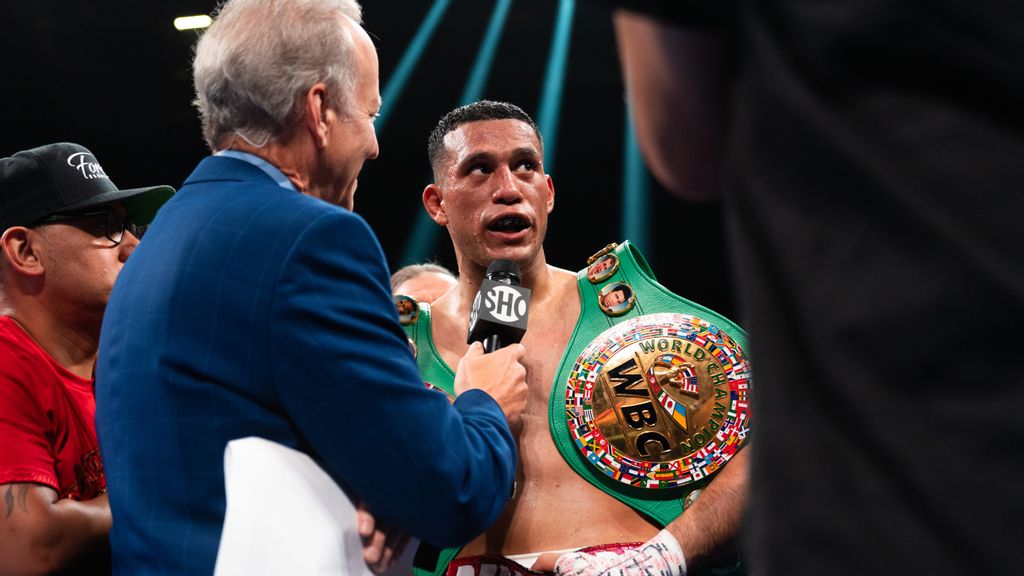 David Benavidez was once the youngest 168-pound world champion in history, but the unbeaten, 6-foot-2 switch-hitting 24-year-old wants to be an undisputed one.

The two-time champion did his part on Saturday night to remain on track for an all-Mexican title bout against undisputed 168-pound king Canelo Alvarez, scoring a vicious, double-fisted, beat-down for his fifth straight knockout against Kyrone Davis, who was stopped for the first time in his career.

Another option for the power-punching Benavidez is WBC 160-pound champion Jermall Charlo (32–0, 22 KOs), who is considering a rise into the 168-pound division primarily to face Alvarez.

Benavidez (25–0, 22 KOs) called out both fighters after hammering Davis (16–3–1, 6 KOs), whose trainer threw in the towel 48 seconds into the seventh round before “El Bandera Roja’s” (The Red Flag’s) sold-out hometown crowd at the Footprint Center in Phoenix, Arizona, in a Premier Boxing Champions event on Showtime.

“Everybody wants to see me against Canelo, right?” Benavidez said of Alvarez, who plans to return against an opponent to be determined in May 2022 during the Cinco de Mayo Mexican holiday weekend. “Or does the big [Jermall] Charlo wanna get it, too? [Charlo] don’t wanna get into the ring with me because he’s a big p***y. That’s why. I’ll go through anybody or whoever they want me to go though.”

Benavidez’s promoter, Sampson Lewkowicz, told Zenger that he plans to travel to Mexico City for the WBC’s Nov. 14–19 annual convention, where he will try to appeal to WBC president Mauricio Sulaiman to make an Alvarez-Benavidez fight.

“Tomorrow at 9:45 a.m. I’m leaving for Mexico to go to the convention of the WBC to request that it’s time for Benavidez to have a shot at [the WBC title held by Alvarez,]” said Lewkowics by telephone exclusively to Zenger.

“I don’t really care what his assessment is. He just needs to give me the opportunity,” said Benavidez, who ripped “Shut It Down” Davis evenly to the head and body with jabs, hooks, upper cuts and 50 body shots. “That was a great performance on my end and a lot of courage by Kyrone. I respect him and his team a lot. Tough dude, and he came out here to give the fans a good fight.”

A late replacement for Jose Uzcategui (31–4, 26 KOs) after the former champion was forced to withdraw due to a failed pre-fight drug test, Davis has spent time in the separate training camps of past and current champions Terence Crawford, Gennadiy Golovkin, Adrien Broner, Julian Williams and southpaws Erislandy Lara and Demetrius Andrade as well as title challengers Erickson Lubin and Jesse Hart.

As Benavidez violently hammered the 5-foot-10 Davis both in the center of the ring and on the ropes, trainer Stephen “Breadman” Edwards began to see that his fighter was absorbing too much punishment.

But the pounding continued into the seventh as Davis was out-landed, 27-to-10, before Edwards threw in the towel at the 2:12 mark of the round, being acknowledged by referee Wes Melton.

“From day one, [Edwards] has been my guy. I’m upset, but not at him. If he wanted to stop the fight to protect me, I understand. This is like my second father as much as my father,” said Davis, 27, of Monmouth, N.J. “I feel okay. I’m a little disappointed. I don’t like losing. I wish I could have pulled out the victory. It was a hard fight. I came in on two weeks notice. I said f*** it. Let’s work.”

Davis was 3–0–1 (1 KO) in his previous four bouts, his past two fights being a draw with former champion Anthony Dirrell in February and a unanimous decision over Martez McGregor in September.

“They called me and told me, ‘let’s fight one of the top dudes in the division,’” Davis said. “I said, ‘how in the hell am I going to pass that off. I came in here and fought my ass off and did the best that I could.”

Once the youngest 168-pound world champion in history, Benavidez had been stripped of his WBC crown in October 2018, declared “Champion in recess,” and suspended for six months following a positive drug test for Benzoylecgonine (the main metabolite of cocaine).

The WBC made the decision at its convention, also ordering Dirrell into a vacant title fight against Avni Yildirim, whom he defeated by technical decision in February 2019.

Benavidez ended his ring absence with a second-round knockout of J’Leon Love in March 2019 before regaining the WBC crown that September with a ninth-round knockout of Dirrell, who was stopped for the first time in his career.

An overweight Benavidez lost that title on the scales in advance of a 10th-round knockout of Roamer Alexis Angulo (August 2020) before scoring an 11th-round TKO over Ronald Ellis in his last fight in March.

At 20, Benavidez earned the WBC’s 168-pound title by split decision over Ronald Gavril in September 2017, overcoming an injured middle left knuckle and a final-round knockdown to become the youngest world champion in division history and the sport’s youngest titleholder at the time.

Darrin Van Horn had been the youngest boxer to win the 168-pound title when he accomplished the feat in 1991.

Benavidez ended Gavril’s seven-fight winning streak (five by KO) and won his return bout with Gavril in February 2018 by near shutout unanimous decision.

The split-decision victory over Gavril ended Benavidez’s knockout streak at 10 and at 17 in his previous 18 victories, including 13 inside of two rounds. The matches with Gavril followed Benavidez’s three-knockdown eighth-round TKO of former title challenger Rogelio Medina in May 2017.

“The thing about me is that I have so much conditioning that I’m gonna keep going until they eventually stop it. What usually happens is that they tend to give up. I may not have that one-punch knockout power, but I’m gonna be ready to get you every single round,” said Benavidez, who turns 25 on Dec. 17.

“I’m looking to improve in every area. I’m 24 years old, and next month is my birthday. I’m gonna continue working because I can get better. I’m going to keep working until I become the best.”

“I beat him every round. He was just running. I don’t know how he got a draw. We can run it back. He kept running the whole fight,” said Jose Jr., who lost his previous fight in August 2018 by 12th-round TKO to three-division and WBO 147-pound champion Terence Crawford (37–0, 28 KOs).

“He wasn’t really landing anything on me. What can I do? I beat him. He kept running. He wasn’t hitting me with anything hard. I can’t do anything. It’s the judges’ decision. I felt good. He just kept holding. He kept hitting me after they said stop. I’ll go back and train. Next time I’ll stop him if he doesn’t run.”

“You can hear it from the crowd. They think I won the fight,” said Torres, disputing scores of 96–94 for Jose Jr. and 95–95 twice. “As a visitor I came here to his backyard and they still call it a draw. Imagine if this would have been in Buenos Aires or somewhere else. I definitely want the rematch.”

Benavidez Jr. was shot in his right leg just above the knee by a man on August 23 while he was walking his dog near his home in Phoenix. The injury appeared to be life-threatening due to the volume of blood loss.

Benavidez returned for consecutive knockout victories in 2018, ending a 19-month absence in February with an eighth-round TKO of Matthew Strode, followed by an impressive 84-second knockout in June of Frank Rojas before facing Crawford. Rojas entered at 22–0 (21 KOs).

“When Jose Jr. fought Terence Crawford, his leg was 60-to-70 percent,” said Jose. Sr., who trains both of his sons. “I was nervous in the Crawford fight because I didn’t know how the leg would react. He showed he has heart and did better than I thought.”