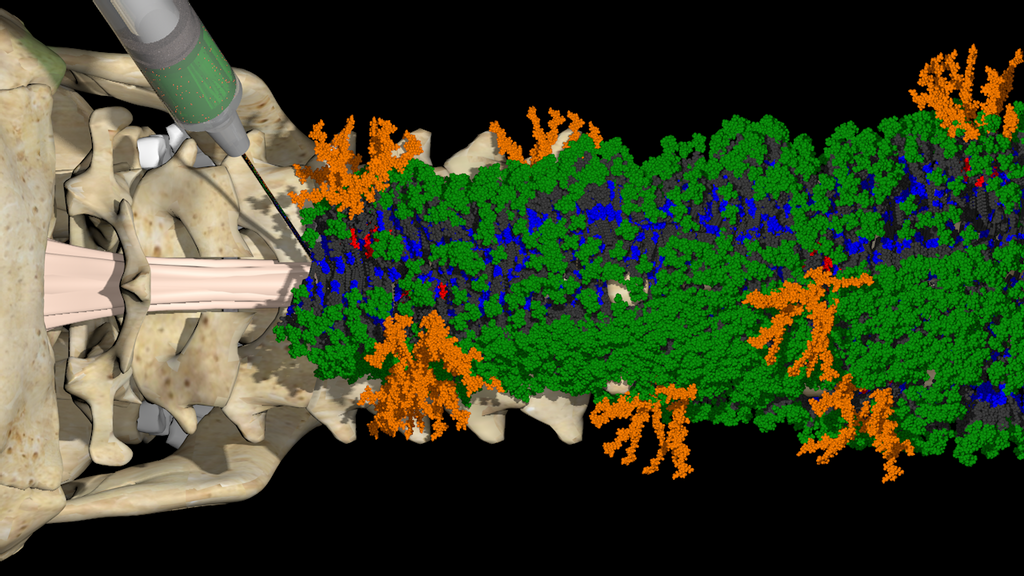 A new injectable therapy forms a nanofiber scaffold with two different bioactive signals (green and orange) that communicate with cells to initiate repair of the injured spinal cord. The gel breaks down into cell nutrients and dissipates over time. (Illustration by Mark Seniw. Samuel I. Stupp Laboratory/Northwestern University)

Scientists at Northwestern University have found that mice injected with the innovative treatment regained their ability to walk after only four weeks. Video showed how a once-paralyzed mouse could use its legs again after receiving the treatment.

Samuel Stupp, director of the Simpson Querrey Institute at Northwestern University, said the research group aimed to find a therapy that prevented paralysis after major trauma or disease. Their findings were published in the journal Science.

“For decades, this has remained a major challenge for scientists because our body’s central nervous system, which includes the brain and spinal cord, does not have any significant capacity to repair itself after injury or after the onset of a degenerative disease,” said Stupp.

The group intends to apply for federal Food and Drug Administration approval to test the therapy in human patients.

The breakthrough therapy sends bioactive signals that enable spinal cord cells to regenerate and repair. This was seen in five key areas: the severed extensions of neurons, called axons, regenerated; more motor neurons survived; scar tissue was significantly diminished; the insulating layer of axons, or myelin, which supports the efficient transmission of electrical signals, was renewed around cells; and blood vessels began delivering nutrients to cells at the place of injury.

Axons send signals between the brain and nervous system much like cables distribute electrical energy. When axons are cut or damaged, patients may suffer paralysis and/or loss of feeling. Renewing the connections improves body/brain transmissions.

Nearly 300,000 people in the United States live with a spinal cord injury, according to the National Spinal Cord Injury Statistical Center. Therapy options are limited, and their lives are difficult. Fewer than 3 percent of those with complete injury ever recover basic physical function, and 30 percent experience rehospitalization at least once during any given year.

Costs for care per patient can reach millions of dollars over a lifetime, while life expectancy is significantly lower than for people without spinal cord injuries. The situation has not improved since the 1980s.

The secret to the therapy lies in tuning the motion of molecules, so they can find and engage with cellular receptors, which are constantly in motion. The liquid therapeutic becomes a gel once injected, transforming into a network of nanofibers mimicking the extracellular matrix of the spinal cord. The synthetics communicate with the receiving cells by matching the matrix structure, imitating the movement of biological molecules with “bioactive scaffolds,” and incorporating signals for receptors.

“Receptors in neurons and other cells constantly move around,” Stupp said, noting that the key innovation is the control of the “collective motion of more than 100,000 molecules within our nanofibers. By making the molecules move, ‘dance’ or even leap temporarily out of these structures, known as supramolecular polymers, they are able to connect more effectively with receptors.”

Once the therapeutic materials do their job, they biodegrade into cell nutrients within three months and completely disappear without noticeable side effects. This is the first time the collective motion of molecules has been controlled by changing a chemical structure to increase a therapy’s efficacy. The fine-tuning of the molecules’ motion within the nanofiber network made cells more responsive to the therapy in paralyzed mice. Formulations of this therapy during in vitro tests with human cells also showed better performance, increased bioactivity and cellular signaling.

One injection is followed by two signals

Following the injection, the moving molecules connect with receptors and initiate two signals that rejuvenate the spinal cord. One of them triggers the axons. The other improves the neurons’ chances of survival by stimulating other cell types to proliferate.

Blood vessels, which feed neurons and other cells, grow back, while myelin rebuilds around axons and reduces the scarring of glial cells, which protect and provide oxygen to neurons.

Co-author Zaida Álvarez said the natural proteins mimicked by the signals are expensive to produce. She said the synthetic signals the team developed, however “are short, modified peptides that — when bonded together by the thousands — will survive for weeks to deliver bioactivity.”

“The end result is a therapy that is less expensive to produce and lasts much longer,” Álvarez said.

Noting the lack of adequate therapies, Stupp said he wanted to “make a difference [in] the outcomes of spinal cord injury.” He said the new approach could also address “neurodegenerative diseases and stroke,” including ALS, Parkinson’s and Alzheimer’s disease. The essential discovery of the study, according to Stupp, is that “controlling the motion of molecular assemblies to enhance cell signaling [can] be applied universally across biomedical targets.”