VIDEO: The Eagle Is Grounded: Golden Eagle Hit By Train As It Swooped On Prey

Bird’s broken wing is too badly injured for it to be returned to the wild, say rescuers. 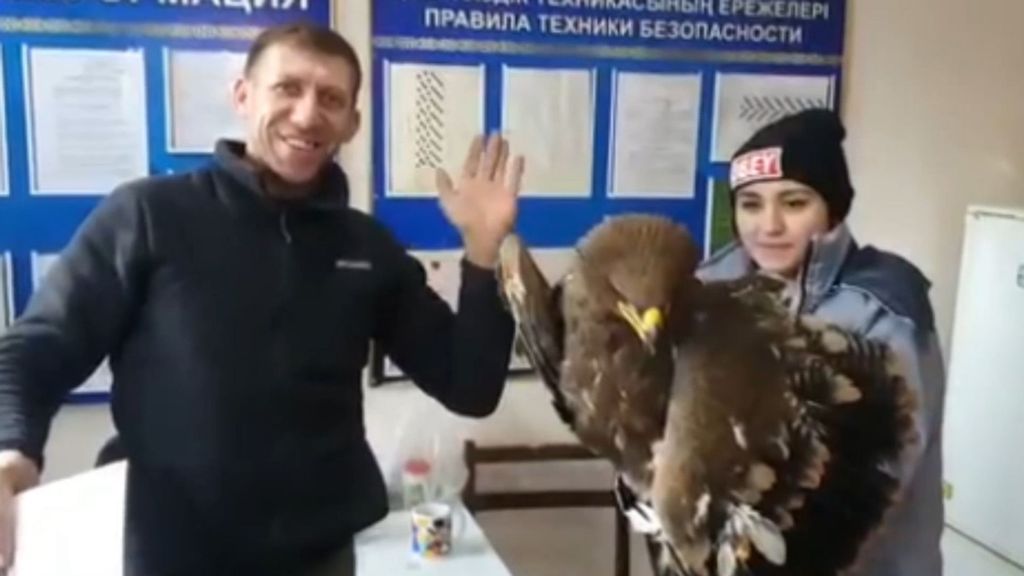 A wounded golden eagle was found in Almaty, Kazakhstan. Rescuers say its wing is badly damaged, and it will not be able to return to the wild. (@almaty_pomosh_zhivotnym/Zenger)

Video shows an injured golden eagle that was rescued after it broke its wing when it hit a train.

The golden eagle was saved in Kazakhstan’s largest city, Almaty, by a woman identified only by her first name, Evgeniya. No date was given for the rescue, but video was posted by a local animal rescue group on Nov. 10.

“The golden eagle was found near a train depot,” Evgeniya said. “Based on the nature of its injuries and on the location where it was found, it is believed that it collided with a locomotive.”

Evgeniya said the golden eagle might have been hunting in the area before crashing “into a locomotive at flying speed.” She said it was left with a broken “and almost torn-off wing.”

One video shows the eagle during the rescue in the train depot. It can be seen being held by one of the members of the team, with a blanket over its head so it does not panic. The team member lifts the blanket to reveal the large bird of prey.

Another video shows the eagle resting on a blanket after having been given something to drink, while a final piece of footage shows the eagle appearing to be doing much better.

A third video shows the eagle being picked up by one of the animal rescue team members while a man speaks next to them. They get a bit closer, and the bird, which seems to have regained some strength, appears to attempt to bite the man’s fingers, prompting everyone to laugh.

Evgeniya said that though she and her team rescued the bird, it will not be able to return to the wild because “its wing is shattered.”

“In the wild, with such injuries, the predator usually dies because it cannot continue to hunt. After rehabilitation, the golden eagle will continue its life in the zoo together with other disabled birds.”

While golden eagles are listed as animals of least concern by the International Union for the Conservation of Nature’s Red List of Threatened Species, Evgeniya said that the birds are listed in the “Red Book in Russia and Kazakhstan” and that “the population is small and constantly declining.”

The Red Book is officially the Red Data Book of the Russian Federation, the government database that documents rare and endangered animal and plant species.

While golden eagles can be found in many countries in the Northern Hemisphere, their numbers have recently experienced sharp declines in many parts of the world.

Golden eagles may be found in forests, scrublands, cliffs and mountain peaks and even deserts.