Roommates and training partners might meet in finals of tonight’s MMA tilt between the USA and Mexico. 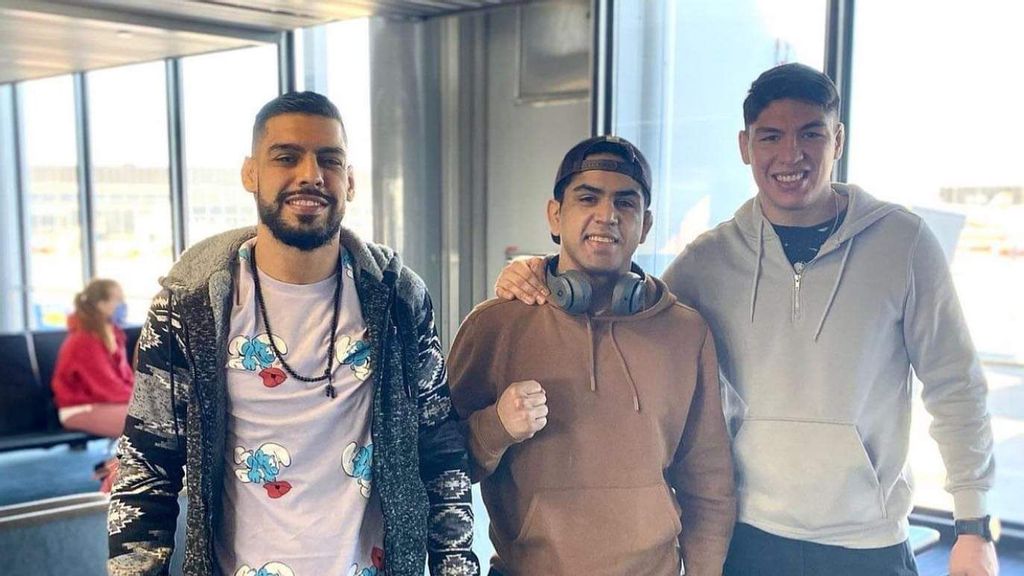 Mixed martial arts can turn the best of friends into the fiercest of enemies if they meet in a cage. That scenario could take place in the finals of Combate Global’s “USA vs. Mexico” eight-man lightweight tournament tonight.

Enrique “Baby Bull” Gonzalez (9–4) originally from Laredo, Texas, is part of the four-man U.S. contingent, while Hugo “The Hooligan” Flores (9–3) of Guadalajara, Mexico, will fight for Mexico. Both train at Valle Flow Striking Academy outside Chicago and both are coached by Mike Valle. They are training partners, roommates and good friends.

“Couldn’t have better company,” Gonzalez wrote on his Facebook page under a photo of him, Flores and MMA fighter Ignacio “La Jaula” Bahamondes departing Chicago’s O’Hare Airport on their way to tonight’s bouts in Miami, Florida.

The Combate Global tournament format conceived by UFC co-founder and Combate Global CEO Campbell McLaren has the four U.S. fighters paired against each other in two one-round, 5-minute fights. The winners face each other in another one-round, 5-minute semifinal to decide who represents the U.S. in the finals scheduled for three 5-minute rounds.  Same for the Mexico side, presenting the possibility of Gonzalez and Flores meeting in the title match.

“It makes it very interesting for us,” Piera Valle, Mike Valle’s wife and Gonzalez’s manager told Zenger. “We were thinking, ‘How is this going to work?”

The first order of business was to get the fighters to accept the possibility. The potential of fighting a friend isn’t a foreign concept in combat sports, especially if they compete in the same weight division on the professional level. Business is business.

“They have trained together every single day,” Valle said. “So the best possible scenario is that they fight each other in the finale because that means they both win.”

The contingency plan is that if both of his fighters reach the finals, Mike Valle will go from coach to a very conflicted spectator. Instead of selecting one fighter over the other, Mike Valle will leave the two fighters on their own with only someone to give them water between rounds. Bahamondes, who has fought for Combate, will be one of two water boys.

“We’ve made it very clear that when they make it to the finale there’s no coaching whatsoever,” Piera Valle said. “It would be an unfair advantage for the person that would be coached by Mike. So it’s no coaching, just water.”

Gonzalez didn’t want to forecast the potential finale, saying he was focused mainly on his own game. “May the best man win,” he told Zenger.

Still, it poses an intriguing ending to what could be the biggest night of each fighter’s life. Their journey is typical of those of many young men and women who want to attempt a professional career in MMA.

Gonzalez left his hometown of Laredo after graduating from high school in 2015 and moved to Chicago to train at Valle’s gym. Mike Valle and Enrique’s father were friends, and the younger Gonzalez had shown promise, having studied karate, boxing, jiu-jitsu and other forms of martial arts.

Flores made his way there from Guadalajara and has been in Chicago for about a year. It’s a dedicated lifestyle where dreams are big and opportunities to get noticed can be few.

“We sponsor athletes from all over the world and give them the opportunity to train with us and stay rent-free to see if they have promise,” Piera Valle said. “People are starting to understand that these athletes train all day long, and live a clean lifestyle. The sport is more legitimate and competitive than it was even three or four years ago.”

Gonzalez has been at this for six years and still shows plenty of potential. “He is very athletic, and is able to pick things up very quickly,” Valle said. “He has the will. When he’s on point, he’s unbeatable. He has a very bright future in front of him.”

Flores arrived in Chicago last October after leaving his friends and family in Mexico. “I’m happy with the decision I made a year ago, and I don’t regret it for a second,” he wrote on the Valle Flow Striking Facebook page. “I’m excited. For so long I waited on having opportunities that are now coming and even more so to know that I’m in the right place to develop and overcome every challenge.”

Gonzalez sees this tournament as a chance to prove he can contend for a title and have a long and successful career in MMA. “I’m focused on this,” Gonzalez told Zenger. “I want to make the company proud and get a couple of bucks out of them.”

Gonzalez and Flores must get past the first two rounds to reach the finals. The concept of a one-round, 5-minute fight is far different from the normal three-round fight, those involved say.

“What’s interesting about this is that anything can happen in one round,” Valle said. “Over three rounds, the person with the highest skill set is normally going to wind up the winner. But when it’s one round, anything can happen. And having to fight three times is a mental challenge that not a lot of people can endure. The mental game matters more in this type of competition.”