The project raised $22 million from U.S. veterans organizations and the South Korean government. 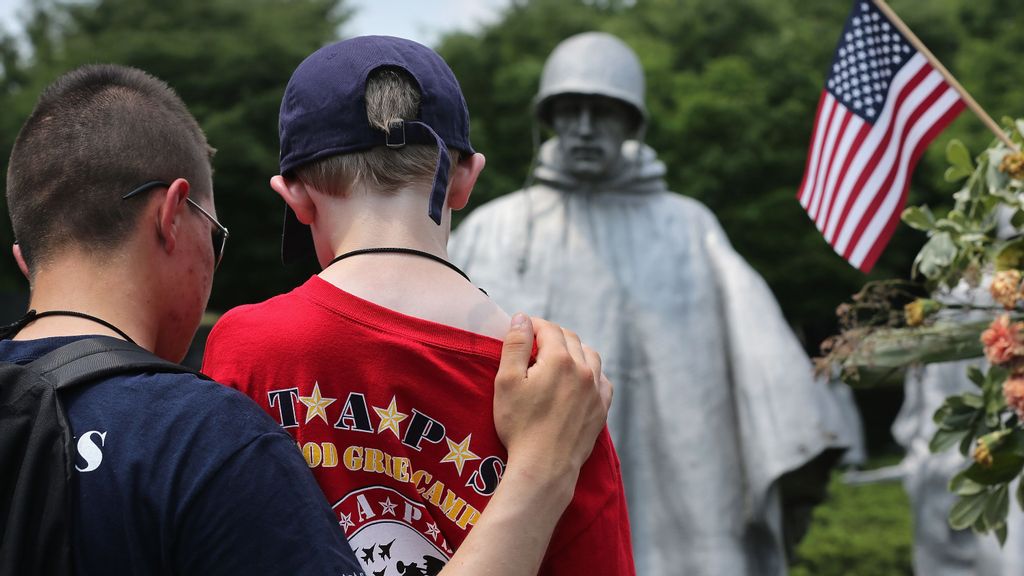 The son of a fallen Iraq war soldier visits the Korean War Memorial during a “Good Grief Camp” outing in May 2021. (John Moore/Getty Images)

A 94-year-old veteran who is represented among the 19 sculptures of soldiers at the Korean War Veterans Memorial in Washington, D.C., lives just an hour’s drive from his stainless steel effigy.

Ret. Col. Bill Weber, whose face is depicted on statue number 16 at the memorial, lives with his wife on a farm in Maryland. Weber also served as a paratrooper in World War II. He was deployed to Korea in August 1950.

During the Third Battle of Wonju in February 1951, Weber was struck by a grenade and a mortar blast, causing him to lose his right arm and leg. After a period of hospitalization, Weber was retained for active duty, becoming one of the first disabled soldiers on active duty since the Civil War. He retired in 1980, after 38 years of military service.

Despite its realistic depictions of veterans in murals and sculptures, the Korean War Veterans Memorial is often overlooked compared to its neighbors. The Vietnam War and World War II memorials, within a mile radius, each see a higher yearly number of visitors than the triangular tribute to Korea’s veterans.

The Korean War has been referred to as the “Forgotten War” since 1951, years before the conflict ended. While entire chapters in American history textbooks are devoted to World War II and the Vietnam War, the Korean War, the first major proxy war of the Cold War era, often is summarized in a paragraph.

Just a few years after the end of World War II, war-weary Americans preferred to turn their attention elsewhere. World War II veterans had just survived the deadliest war in human history and were focused on rebuilding their lives at home.

“America still was tired of war from World War II from sacrificing with Victory Gardens and rationing and so forth. It didn’t probably sit well, they were going into another major conflict in Korea, which a lot of people didn’t know anything about,” said James Fischer, executive director of the Korean War Veterans Memorial Foundation.

“They never got properly thanked and honored … they’re forgotten. So we try with our foundation to thank and honor and keep the legacy alive of the Korean War veterans and their service and sacrifice.”

The memorial, which took longer to build than the three-year war, features multiple sections by different artists. Designed by Louis Nelson of New York and unveiled in 1995, a granite mural depicts more than 2,400 archived images of men and women who aided combat troops, including nurses, priests, supply men, logistics officers, and one soldier’s German Shepherd. The images were digitally altered so that the shadows of faces were on the right, and then sandblasted. The wavy pattern of the etchings bear a resemblance to the mountainous Korean terrain from afar.

“The first time I see my memorial, my wall, as partly finished, I had tears in my eyes,” said Nelson. “The other thing, I realized, I said, ‘This isn’t mine anymore. It belongs to them. Belongs to the veterans.

“Another veteran ran up to me and just thanked me. Because of the memorial, he was able to now talk about his service when he was in Korea. He had just blocked it all off. But now because of the mural, it gave him the freedom to be able to see himself again. That’s very touching,” said Nelson.

The wall is opposite a mass sculpture of 19 individual soldiers called the “Field of Service,” including at least one in each of the U.S. military’s four branches. Designed by the late Frank Gaylord, the sculptures appear as 38 when reflected in the mural, representing the 38th parallel (the line dividing North and South Korea) and the 38 months of combat.

Juniper bushes line the ground underneath the soldiers’ feet to represent Korea’s rice paddies. The stainless-steel soldiers, each 7 feet tall and weighing 800 pounds, appear ready for action, observing their surroundings as they emerge from the woods.

Congress enacted the Korean War Veterans Memorial Wall of Remembrance Act in 2016 authorizing the memorial and to “include a list of names of members of the Armed Forces … who died in the Korean War, as determined by the Secretary of Defense.”

“We were elated,” said Ret. Col. Richard Dean II, vice chairman of the Korean War Veterans Memorial Foundation. “It was hard to believe that six years of hard work came about. And then we realized that we got to start raising money and went on to the next step of fundraising,”

The project raised $22 million from American veteran organizations and the South Korean government.

The Wall of Remembrance, still under construction, is set to be unveiled in a ceremony on June 27, 2022. It will feature the names of 36,574 American soldiers who lost their lives, as well as the 7,200 soldiers in the Korean Augmentation to the U. S. Army. President Joseph R. Biden Jr. and the next elected president of South Korea are scheduled to attend.

The Pool of Remembrance, a reflection area surrounded by linden trees, will be closed during construction, but the “Field of Service” and mural remain open to the public.

“Freedom is not free” is engraved on the mural, reminding visitors of the sacrifices made in all wars.

The average age of fallen soldiers in Korea was 19.