Once trapped to the brink of extinction in Washington, environmentalists are building up the population of the cat-sized hunters. 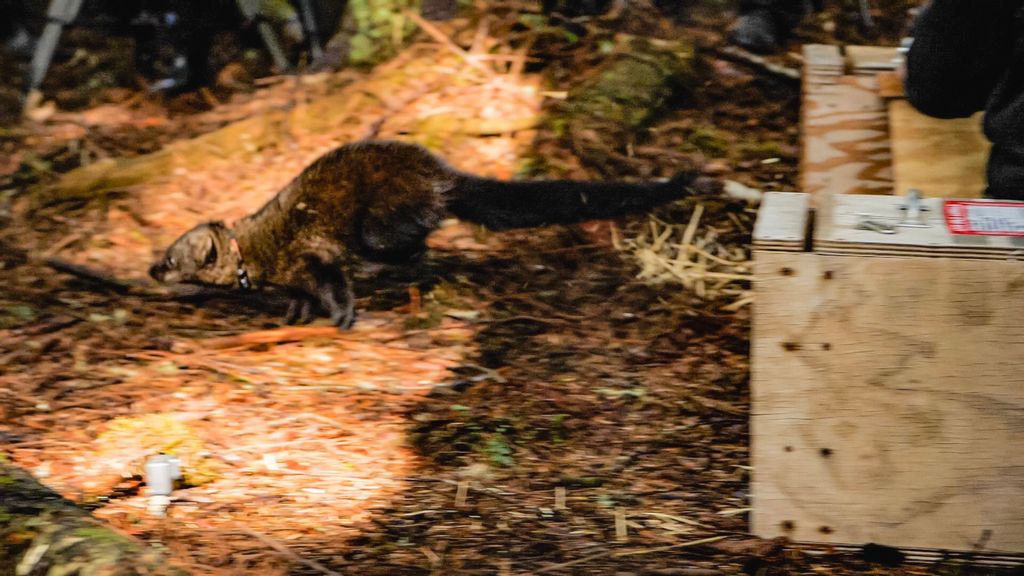 One of the fishers, members of the weasel family, is released from a wooden crate into the forest near Lake Ozette in Olympic National Park in Washington State. (National Park Service/Zenger)

Video shows fishers, which are members of the weasel family, being released in Olympic National Park as part of a two-decade effort to restore the native species to Washington State.

The footage was posted online by the National Park Service with the caption: “Some very welcome newcomers arrived at Ozette last week…!” Lake Ozette, the largest natural lake in the state of Washington, is in the northern part of Olympic National Park near the Pacific coast.

“Fishers — a member of the mustelid or weasel family roughly the size of a house cat that feeds on rodents, hares and even porcupines — were extirpated from Washington by the 1930s due to over-trapping, poisoning and fragmentation of their forest habitat,” the park service said.

“This latest fisher release is part of an ongoing partnership led by the Washington Department of Fish and Wildlife, the National Park Service, U.S. Geological Survey and Conservation Northwest to restore the elusive carnivores to Washington’s Olympic Peninsula and Cascade Mountains.”

The park service said that “while the Washington Fisher Reintroduction Project met its goal in early 2020, releasing more than 250 total fishers across the Olympic and Cascade ranges with successful reproduction documented in both areas, project partners saw an opportunity this year to boost the numbers and genetic diversity of fishers on the Olympic Peninsula using animals live-trapped in Alberta.”

The Ozette area was chosen “due to the ongoing partnership with the Makah Tribe since 2008 and the Makah Tribe’s continued research on the fisher population in the Ozette to Neah Bay region,” the park service said.

“Watching fishers return to the forests of the Olympic Peninsula is truly inspiring,” said Olympic National Park Superintendent Sarah Creachbaum. “As they scamper through lush ferns and back into our biodiverse landscape, you can tell they belong here and will enrich our natural heritage and support the overall health of this ecosystem.”

«Previous Post
VIDEO: Waddle We Do Now Lockdown’s Over? Zoo Penguins Go For A Stroll»Next Post
Companies Join In Creating A Decarbonized Economy