VIDEO: Waddle We Do Now Lockdown’s Over? Zoo Penguins Go For A Stroll

King penguins delight fans as they explore the landscape after months of COVID quarantine. 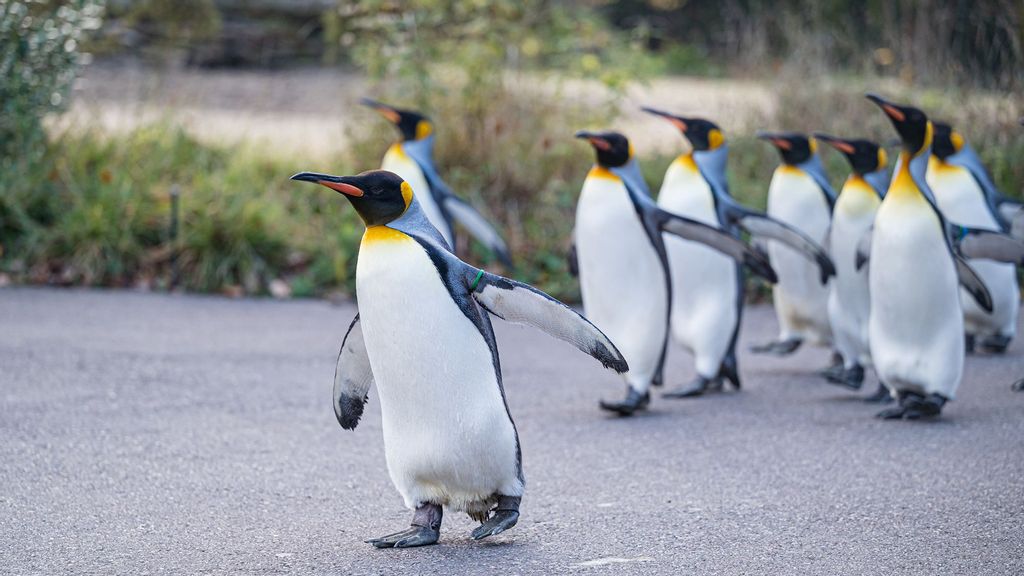 A dozen king penguins waddled down a Swiss zoo footpath during their first daily walk in over a year. Their strolls had been canceled due to COVID-19 restrictions.

The footage of the king penguins enjoying their 11 a.m. walk was captured this month by Basel Zoo staff. The walk is a popular draw for visitors, allowing them to get close to the flightless birds.

The king penguin is the second-largest species of penguin in the world, measuring 28 to 39 inches in height and weighing between 21 and 40 pounds.

The penguins in the video are walking from the indoor facility where they spend the night to an outdoor vivarium.

The walk takes place early in the day during the winter months, since the temperature tends to be around 50 degrees Fahrenheit. That is comfortable for the birds, which are native to ice-cold climates. King penguins live on Antarctic and sub-Antarctic islands.

During the summer, it is too hot to walk outside and there is the threat of mosquitos infecting them with bird malaria. Instead, they are kept in air-conditioned vivariums.

Currently, 19 king penguins are participating in the daily walk, but the zoo plans to add eight gentoo penguins into the routine in the coming weeks.

The gentoo penguin is considerably smaller than the king penguin, measuring 20 to 35 inches and weighing no more than 19 pounds when fully grown.

The zoo said: “Gentoo penguins are very curious and like to swallow foreign objects such as leaves and pieces of wood. As soon as the leaves have completely fallen from the trees and the paths have been cleared, the smaller species is part of the party.”

The gentoo penguins show a high level of curiosity toward random objects, given their nesting instincts. They collect stones in their beaks during the mating season and present them to their partners as a gift to make their nests. Gentoos rear two chicks a year, rather than one.

Conversely, king penguins do not construct nests, so are less interested in picking up stones and twigs along the footpath. The egg is placed on the tops of their feet and incubated under a fold of skin.

The penguins are given considerable freedom by the zookeepers during the walk. Its duration is determined by how long it takes the birds to complete the journey.

The walk also serves as an opportunity to improve their fitness. Despite being mainly aquatic animals, they do spend time walking in the wild when migrating to breeding sites.

The daily walks also improve their cardiovascular system and build up their muscles.