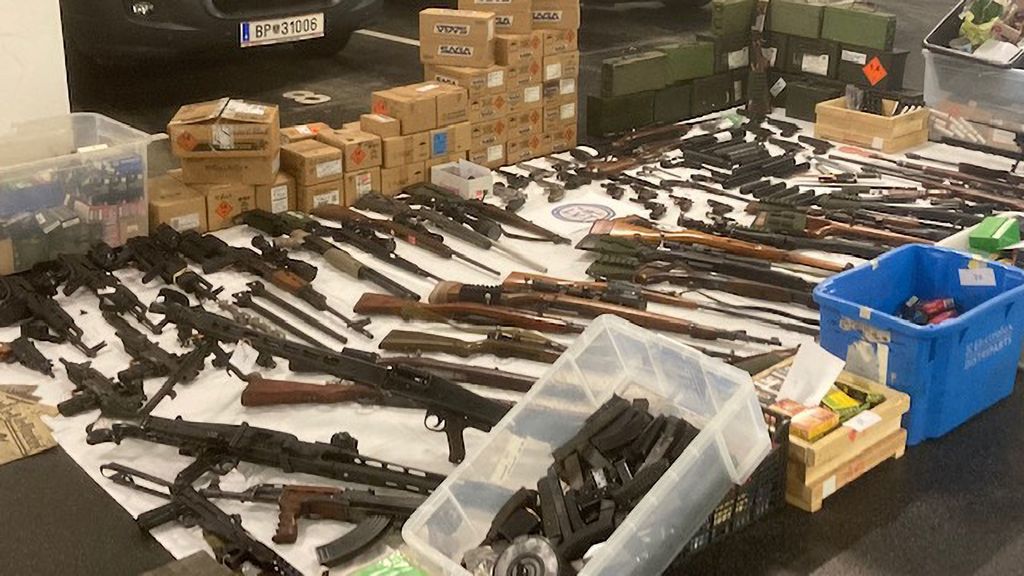 Some of the prohibited war weapons seized from a 53-year-old man's home in Austria's Baden district. (Lower Austria State Office for the Protection of the Constitution/Zenger)

Austrian anti-terrorism police have busted a suspected neo-Nazi and his wife for possession of a huge arsenal of illegal weapons, over a ton of ammunition and a variety of Nazi paraphernalia.

The find was made by the State Office for the Protection of the Constitution and Fight Against Terrorism in Lower Austria, in the town of Baden, on the outskirts of the Austrian capital Vienna.

The haul included heavy machine guns, machine guns, handguns, a hand grenade, pipe bombs and other explosive materials, a sniper rifle with a scope, pump-action shotguns, firearms with silencers, and over 1,200 kilograms (2,646 pounds) of ammunition, along with brass knuckles, knives, pepper spray and electric shock devices.

Also found was a bust of German General Erwin Rommel, nicknamed the “Desert Fox,” who took part in the Nazi campaign in North Africa before being put in charge of defending the occupied French coast from the Allies’ D-Day invasion on June 6, 1944.

“The fight against right-wing extremism is still very much topical,” authorities said. “The man and his wife will be reported to the responsible district administrative authority and the public prosecutor’s office in Wiener Neustadt on the basis of the seized items.”

Many of the seized firearms were loaded.

Footage showing some of the items taken during the massive seizure was released by the office. In addition to the weaponry, authorities also said that they had taken “a steel helmet with a swastika, other Nazi devotional objects (flyers, medals, coins) and various relevant literature.”

The footage shows what appears to be a large number of machine guns, as well as bolt-action rifles, at least one pump-action shotgun, various handguns, machine guns which appear to be from the World War II era, various rifles with scopes, at least two Israeli-made Uzi submachine guns, and what appeared to be a Russian AK-47 or a similar model.

The police said they had imposed a gun ban on the man and his wife, who are both 53. Neither of the suspects have been named and neither the suspect nor his wife confessed during questioning, according to the police.

Police are currently investigating the suspect’s connections to see if other parties may be implicated. Details on specific charges the pair will face was not immediately released.

While the display or possession of Nazi paraphernalia is not illegal in such places as the United Kingdom and the United States, it is in Germany, Austria and several other European nations.