Global sequencing project will improve the strength of one the world’s most popular foods. 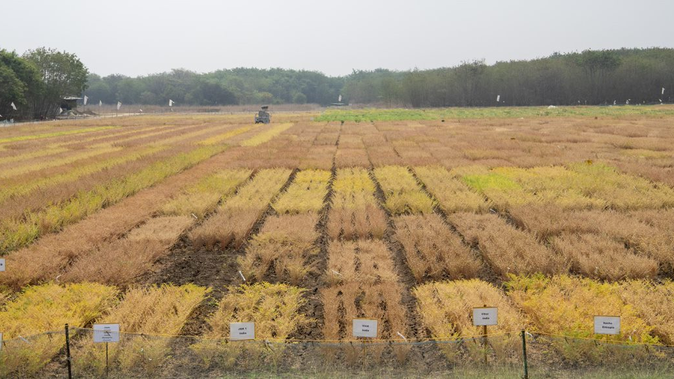 Genomic sequencing of chickpea varieties may lead to improved yields and climate-resiliency, say the authors of a new study. (ICRISAT)

In the biggest plant genome sequencing project ever, an international team assembled a pan-genome from thousands of chickpea lines in 60 countries, which may lead to increased yields for this essential legume.

Researchers identified 29,870 genes in chickpeas (Cicer arietinum), including 1,582 previously unreported ones. The India-based International Crops Research Institute for the Semi-Arid Tropics (ICRISAT) conducted the study, placing chickpeas among the few crops to have had such an extensive genome map. The study was published in the journal Nature.

“By employing whole genome sequencing, we have been able to affirm the history of chickpea’s origin in the Fertile Crescent and identify two paths of diffusion or migration of chickpea to the rest of the world,” the study’s lead researcher, Rajeev Varshney, said. “One path indicates diffusion to South Asia and East Africa, and the other suggests diffusion to the Mediterranean region (probably through Turkey) as well as to the Black Sea and Central Asia (up to Afghanistan).”

Varshney and his team sequenced the genomes of 3,366 chickpea lines from 60 countries. The world’s third-most cultivated legume, chickpeas are essential in many nations’ diets.

“This research provides a complete picture of genetic variation within chickpea and a validated roadmap for using the knowledge and genomic resources to improve the crop,” Varshney said.

Once the initial 2013 sequencing was complete, the sequencing of more lines led to an understanding of chickpea genetic variation, including wild types, and domestic landraces (domesticated varieties developed by farmers). The authors sequenced 3,366 accessions, which represent the chickpea’s genetic diversity in a much larger global collection.

According to the UN Food and Agriculture Organization, an accession is a “distinct, uniquely identifiable sample of seeds representing a cultivar, breeding line or a population, which is maintained in storage for conservation and use.”

The taxonomic name of the chickpea species is Cicer arietinum. The authors found that the cultivated species diverged from its wild progenitor species, Cicer reticulatum, about 12,600 years ago. The wild plant now grows only in the southeast corner of Turkey, where it may have been domesticated. Chickpea seeds are stored at several gene banks.

The number of chickpea varieties reached a minimum about 1,000 years ago but saw a strong expansion in the last 400 years, suggesting a renewed interest in the legume. By analyzing the branching out of eight chickpea species over time, researchers can identify misclassification or duplication of accessions. This should result in better management of chickpea germplasm held at gene banks.

“The demand for chickpea is set to increase in the coming years as the world’s population rises,” yields increase and crops become more climate-resilient, according to study coauthor Trilochan Mohapatra.

“By developing many genomic resources for chickpea over the last decade, ICRISAT has helped the crop shed its ‘orphan’ tag. With our partners in agricultural research for development, we will continue to research chickpea and translate findings into crop varieties that benefit farmers, consumers and nations,” said Jacqueline Hughes of the crop research organization.

Comparison of the genetic variation in cultivated chickpeas and its wild progenitor helped in identifying genes that reduce crop performance. These genes were more abundant in the wild progenitor because over time they were bred out of cultivated lines through selection and recombination. In the future, deleterious genes can be further purged through genomics-assisted breeding or gene editing.

The authors identified haplotypes (blocks of genes) in landraces that can significantly improve yield, climate resilience and seed characteristics. The study examined historical data of all chickpea varieties released between 1948 and 2012, providing insights into the use of haplotypes in varieties of chickpeas.

“We examined 129 varieties released in the past. Though a few superior haplotypes were detected in some of these varieties, we found that most varieties lacked many beneficial haplotypes,” said study co-author Manish Roorkiwal. The research team uncovered 56 promising lines that can “bring these haplotypes into breeding programs to develop enhanced varieties,” he said.

The authors of the study suggest three breeding approaches based on genomic prediction, with the aim of improving 16 species traits. The study shows that by applying them, an increase in yield ranging between 12 and 23 percent can be expected.