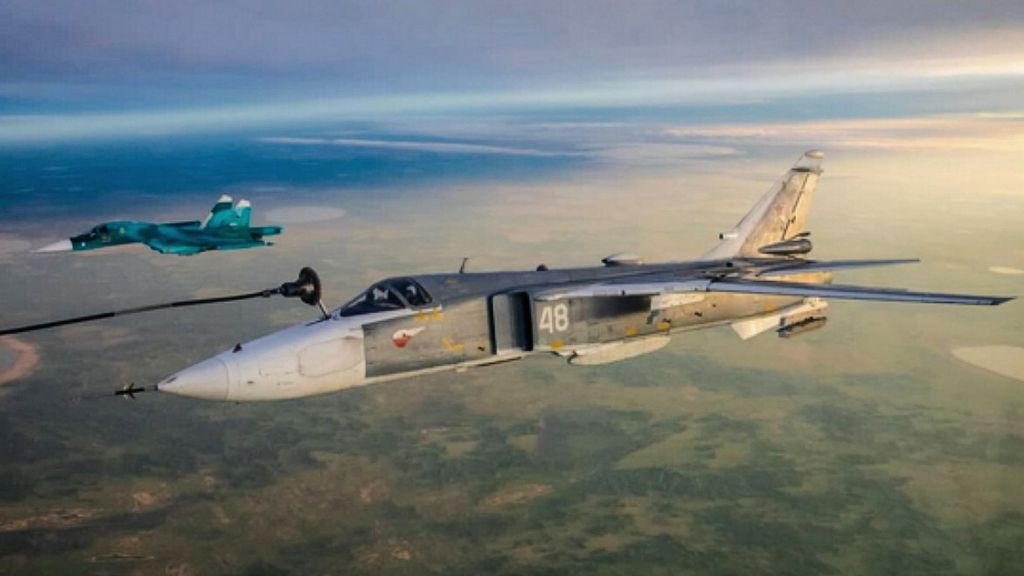 The Russian jet in the foreground has a fuel line attached for a midair refill over the country's the South Urals. (Ministry of Defense of the Russian Federation/Zenger)

While refueling a car is ho-hum affair, the same can’t be said for filling the fuel tanks of a fighter jet.

That fact was illustrated by video just released by the Ministry of Defense of the Russian Federation of fighter-bombers practicing in-flight refuels at altitudes ranging between 2,000 and 6,000 feet (610 and 1,829 meters). The high-altitude refuel requires the two aircraft involved get as close as 66 feet apart to run a fuel line between them.

The refueling exercises involved several Su-34 multifunctional fighter-bombers and a Su-24MR reconnaissance aircraft performing training flights both during the day and at night over Russia’s Chelyabinsk region.

More than 10 aircraft and some 200 flight and engineering personnel from the Air Force and Air Defense Association of the Central Military District were involved in the training exercise.

The footage released by the ministry shows one of the Su-34 fighters flying at high speed at close proximity to an Il-78 tanker refueling aircraft. The refueling hose is released by the tanker and attaches to a nozzle on the fighter, which holds its course while its tanks are filled.

After successfully refueling, the Su-34 returns to its military base, where it is seen landing in snowy conditions.

While midair refueling is one of the most difficult and dangerous elements of flight training, the ministry said it’s necessary to increase the range of its combat units by reducing the number of times fighters need to return to base.

The Ilyushin Il-78 seen in the clip is a Soviet-era four-engine aerial refueling tanker that carries a fuel load of 85,720 kilograms (188,980 pounds) and transfers the fuel to other aircraft through what’s known as the probe-and-drogue refueling method.

The Sukhoi Su-34 — NATO codename “Fullback” — is a Soviet-era twin-engine, all-weather supersonic medium-range fighter-bomber. It’s armed with a 30 mm auto-cannon, along with a variety of laser-guided and satellite-guided bombs.

The Su-34 has played a central role in Russia’s ongoing military intervention that began in 2015 in the Syrian civil war. Su-34s carried out several bombing runs against rebel and Islamic State forces throughout Syria and against the leaders of the Al-Nusra Front, which is also known as al-Qaeda’s Syrian branch.