Historic bracelets were smuggled out to a friend two years before the queen was beheaded. 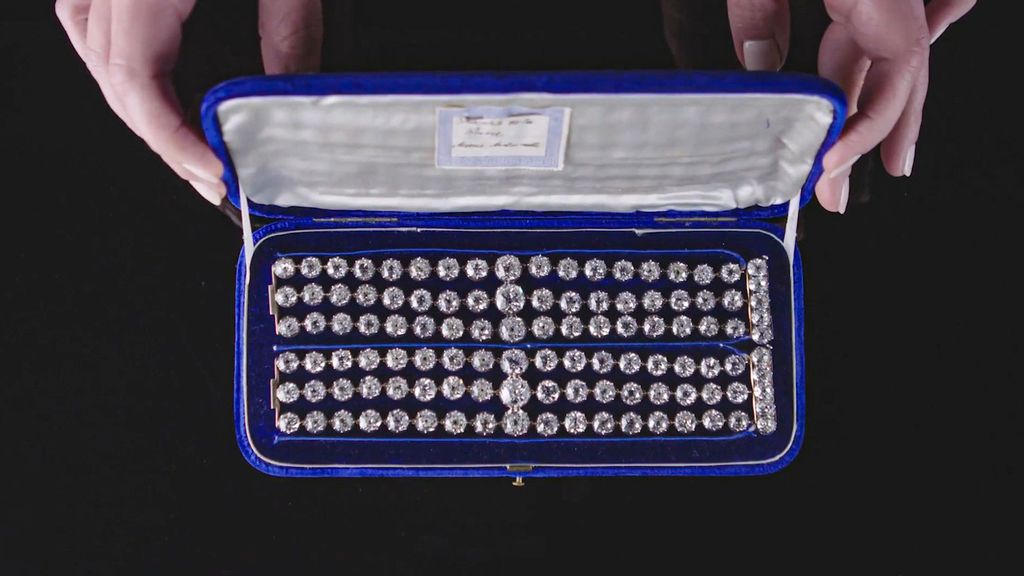 The diamond bracelets of Marie-Antoinette auctioned by Christie's. (Christie’s/Zenger)

A pair of diamond bracelets that once belonged to France’s last queen, Marie Antoinette, sold for $8.2 million at a Christie’s auction on Nov. 9.

The bracelets, which are made up of three strands of diamonds and contain 112 stones of 140- to 150-carats, were hidden in a chest and smuggled out of France when the queen was imprisoned during the French Revolution.

The buyer was not identified.

For 200 years, the bracelets were hidden from the public in a royal collection after they were smuggled away in the course of the French Revolution, Christie’s said in a statement.

Marie Antoinette parted ways with the bracelets in 1791 while she was interned in Paris’ Tuileries Palace.

Sitting in her cell, she realized that the only way to keep the diamonds out of revolutionary hands was to smuggle them out of France. She is said to have wrapped them in cotton and hid them inside a wooden box where they waited to be taken over the border into Brussels.

Brussels at the time was under Austrian rule. The diamonds arrived in the city to be handed over to the previous ambassador of Austria to France, Count Mercy-Argenteau, Christie’s said.

The bracelets were then kept safe in a chest by Mercy-Argenteau, a friend to the queen’s family, who hoped that one day she would once again wear them.

However, Marie Antoinette was executed on Oct. 16, 1793, and four months later, Emperor Francis II, Marie’s nephew, instructed that the chest containing the bracelets be opened.

“Once documented, the contents of the chest were sent from Brussels to the imperial treasury in Vienna, where they were kept for Marie Antoinette’s sole surviving heir, Marie-Thérèse Charlotte of France, Madame Royale, later Duchess of Angoulême (1778–1851),” Christie’s said. “Madame Royale claimed the bracelets upon her arrival in Austria in 1796, as recorded in the letters she sent to her cousin, Emperor Francis II.”

“They are so light and so well made that they simply flow on your wrist like fabric,” he said. “And the imperfect antique cut of the diamonds provides a unique charm that cannot be found in modern cut diamonds.

“What is miraculous is that they have remained together and intact when they could have easily been broken up, as many other jewels of royal provenance have been,” said Lunel. “This makes them particularly attractive to collectors.”