The two-month-old cubs have outgrown their incubator and are adjusting to outside life. Fans will get a chance to name them. 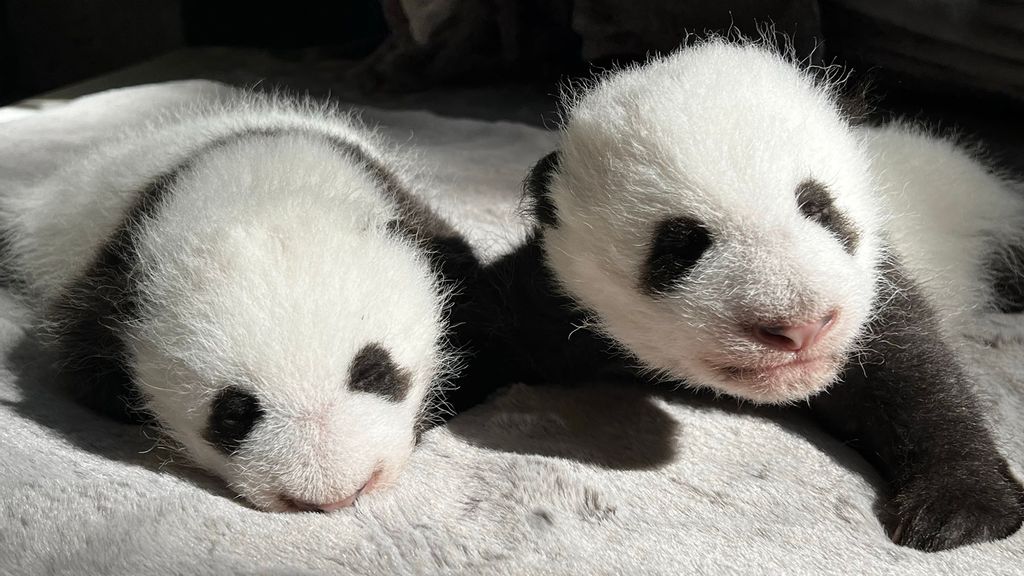 The giant panda twins born at the zoo in Madrid, Spain, are now two months old. Online fans have an opportunity to name them. (Madrid Zoo Aquarium/Zenger)

A video montage shows a panda mother giving birth to one of her two pink cubs. Weeks later, they transform into furry pandas.

The two cubs were born at the Madrid Zoo Aquarium in the Spanish capital on Sept. 6. The zoo said the cubs, now two months old, have successfully passed the most delicate period of their development.

“In these two months of progressive growth, vital to develop the immune system and thermoregulate by themselves, the little pandas no longer need an incubator and are completely covered in black-and-white fur characteristic of their species,” said the Madrid zoo.

“The transformation in these 60 days of life has been astonishing. From their pink, sightless, delicate appearance to the 171.4 and 137.4 grams (less than a pound) which they weighed when born, they have become beautiful giant pandas that already weigh 3.1 and 2.8 kilograms (about 7 pounds and 6 pounds),” the zoo said. Females can grow to 200 pounds, while males can reach 300 pounds as adults.

The cubs now open their eyes, and show off their most characteristic parts, “such as the palms of their hands with their opposable thumb, which they use to grab bamboo canes.”

The zoo said in the last two weeks, the panda cubs began adapting to outside temperatures.

“…they have been out in the sun for a couple of hours in a protected space to continue strengthening. They will begin to sleep in the enclosure and will alternate between breastfeeding, essential for growth, with the first bottles of milk specific for pandas.”

The Madrid zoo is also asking online fans to vote on the panda cubs’ names. Visitors can choose from six names: You You, Jiu Jiu, Xing Mu, Bing Tang, Hua He, and Yue Yuan. They have until Dec. 5 to register their vote.

The giant panda conservation program at the Madrid Zoo Aquarium is of critical importance for the survival of the species. Severe threats from humans have resulted in just 1,800 pandas left in the wild, according to the World Wildlife Fund.

Various efforts from breeding centers and zoos worldwide helped reduced its threat category from endangered to vulnerable, according to the International Union for Conservation of Nature’s Red List of Threatened Species.