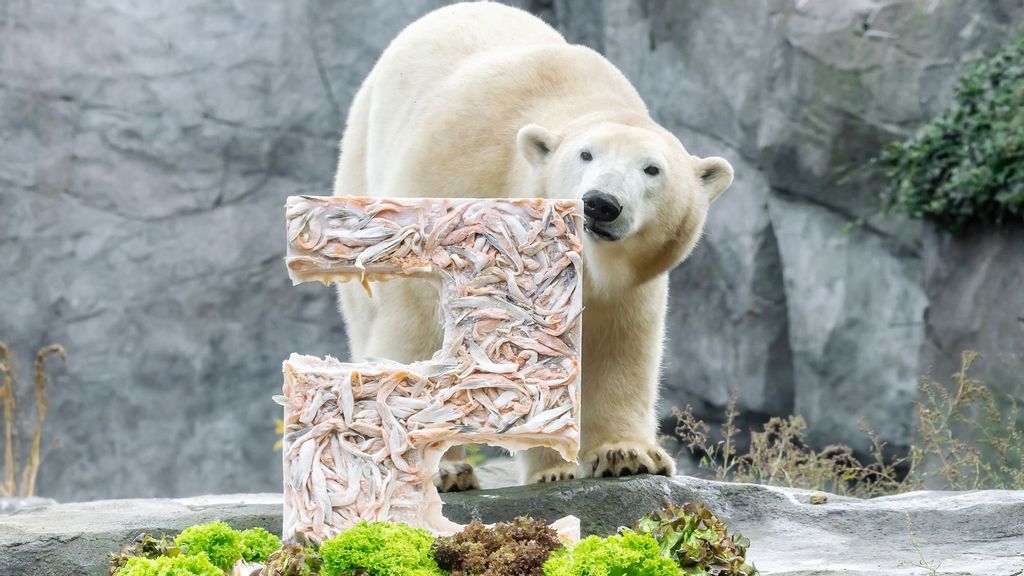 A giant frozen salmon birthday cake, shaped as the number 2, proved a perfect gift for a young polar bear.

The footage shows Finja the polar bear celebrating her second birthday at the Tiergarten Schönbrunn, the world’s oldest zoo, in Vienna, Austria, on Nov. 9.

In the video, Finja and her mother Nora approach the fishy cake, which was displayed at the top of a rock in their enclosure.

The bears circle the cake and then rip chunks of salmon out of the frozen treat. The mother and daughter devour the cake and following the meal, head to the pool to play with a ball and relax.

Stephan Hering-Hagenbeck, the zoo director, said the zookeepers made the big frozen cake with salmon, since it is Finja’s favorite food. A trail of cod liver oil was dripped around the cake, which helped Finja and Nora locate it with their strong sense of smell.

The cake took a lot of time to prepare, but it was destroyed in a matter of minutes after Nora knocked it over with her giant paws. The cake split into pieces after hitting the ground, making it easier for the bears to grab the large chunks of salmon.

Hering-Hagenbeck said Finja has grown into a healthy “teenager” weighing 408 pounds, up from just 1 pound at birth.

Nora is considerably heavier than her daughter, despite appearing to be the same size in the video, weighing in at 551 pounds, a maximum weight for females. A fully grown male can weigh from about 770 to 1,540 pounds.

The polar bear is categorized as vulnerable on the International Union for Conservation of Nature Red List of Threatened Species. This ranking means the species is facing the threat of extinction in the near future — unless the circumstances threatening its survival improve.

The polar bear, the largest bear in the world, is native to the Arctic Circle. The region’s top predator, it primarily hunts fish and seals, spending half its time searching for food. Talented swimmers, polar bears can sustain a pace of 6 mph.

Polar bear numbers have historically been threatened by hunting, but today, the biggest threat facing the giant white bears is climate change, which has led to the extensive loss of their habitat.

The Schönbrunn is a participant in the European Endangered Species Program, which provides a future for some of the world’s most vulnerable species through education and various breeding programs.