Long-necked, plant-eating ancestor of the brontosaurus walked the Earth more than 200 million years ago. 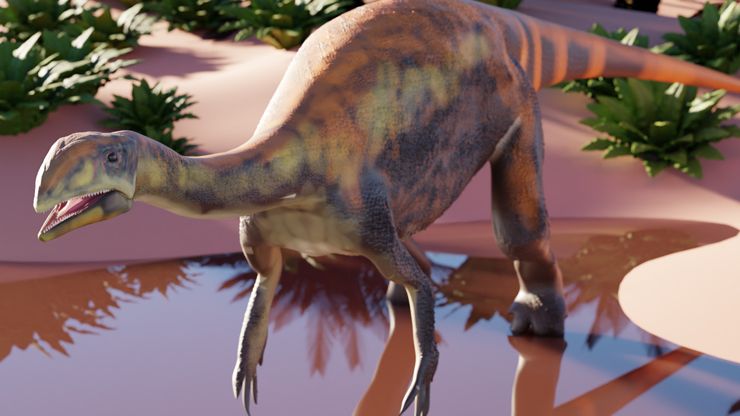 Issi saaneq was a plant-eating sauropod dinosaur that lived 214 million years ago in Greenland, which was warmer during the Triassic Period than today. It is a predecessor of some of the largest terrestrial animals ever to exist. (Victor Beccari)

Scientists have discovered what they believe is the first dinosaur known to have lived in icy Greenland 214 million years ago, during the Late Triassic Period.

The two-legged plant-eating dinosaur — dubbed Issi saaneq by researchers from Denmark, Germany and Portugal — was of medium size, had a long neck and needle-like teeth. It was an ancestor of the largest land animals ever known — the sauropods. Its name, meaning “cold bone,” is derived from the Greenland Inuit language.

Two skulls were originally uncovered in 1994 by Harvard University paleontologists at the Malmros Klint Formation in the Jameson Land Basin, a peninsula in eastern Greenland. It was first thought that one skull belonged to a long-necked Plateosaurus, a dinosaur species that lived in France, Germany and Switzerland during the Triassic Period.

“These specimens certainly pertain to a new species: Issi saaneq,” said Victor Beccari of NOVA University-Lisbon. Beccari is the lead author of a paper on the findings, which was published in the journal Diversity.

“It is exciting to discover a close relative of the well-known Plateosaurus, hundreds of which have already been found here in Germany,” said co-author Oliver Wings of Martin Luther University, Germany.

Researchers used an X-ray scan of the fossils to create three-dimensional models of the structures and bones within the sedimentary rock.

“The anatomy of the two skulls is unique in many respects, for example, in the shape and proportions of the bones,” said Beccari.

One of the two skulls described by the researchers came from a juvenile, while the other belonged to an animal that was almost an adult. Apart from their relative size, the differences between them in terms of bone structure are minor and only relate to proportions. The fossil dinosaur skulls will be transferred to the Natural History Museum of Denmark after studies are complete, as Denmark has sovereignty over Greenland.

The newly discovered dinosaur is different from all known sauropodomorphs but bears a resemblance to Brazilian dinosaurs, such as the Macrocollum and Unaysaurus, which predate it by almost 15 million years. The Brazilian dinosaurs and the Plateosaurus from Germany are among a group of graceful, bipedal plateosaurids that reached lengths of 10 to 30 feet.

Issi saaneq is the first-known distinct Greenlandic dinosaur species. The discovery of the species from the Late Triassic Period (235-201 million years ago) grants a better understanding of the evolution of sauropod dinosaurs, which lived for nearly 150 million years.

The Brontosaurus and Diplodocus, two of the best-known sauropods (meaning “lizard-footed”), were among the largest land animals ever to exist. Titanosaurus, the largest sauropod, lived 100 million to 66 million years ago and had a worldwide range.

When Issi saaneq roamed Greenland, millions of years ago, the continent-sized island was closer to the equator and the climate was warmer. As the supercontinent Pangaea broke apart through seismic activity that produced continental drift, a cleft in the supercontinent formed what became the Atlantic Ocean.

“At the time, the Earth was experiencing climate changes that enabled the first plant-eating dinosaurs to reach Europe and beyond,” said co-author Lars Clemmensen of the University of Copenhagen. Issi saaneq lived at latitudes over 40 degrees north.

“This is the third new vertebrate fossil species that our team [has] named for Greenland, which shows the scientific importance of that territory,” said co-author Octávio Mateus of NOVA University-Lisbon.