A newly documented “harsh and irregular” sound is emitted by honey bees to rally defenses when giant hornets attack. 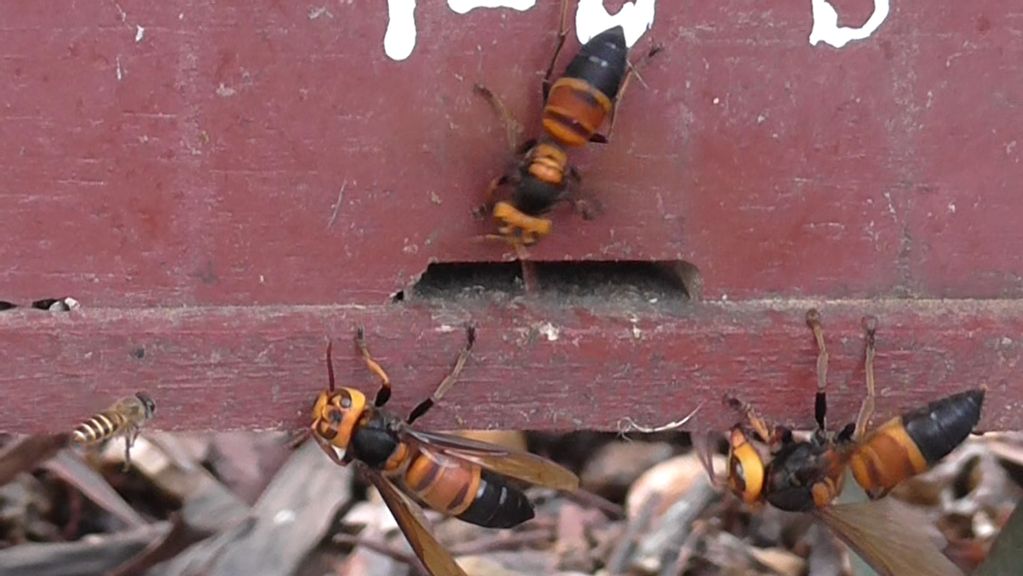 Giant murder hornets attack a honey bee hive in Vietnam. When the hornets attack, the honey bees raise a distinctive, shrieking alarm, according to a new study. (Heather Mattila/Wellesley College)

Asian honey bees alert each other with a specific sound — similar to the screams of mammals or birds — when giant hornets threaten their lives and hives, according to new research.

The “antipredator pipe,” described in Royal Society Open Science, is distinct from previously observed signals, what the researchers described as “hisses” and “stop signals.”

“The pipes share traits in common with a lot of mammalian alarm signals, so as a mammal hearing them, [that’s] something that is instantly recognizable as communicating danger,” said Heather Mattila of Wellesley College, admitting she was chilled by the sounds. “It feels like a universal experience.”

Mattila and her colleagues have studied the relationship between giant hornets (Vespa soror), also called “murder hornets,” and Asian honey bees for over seven years. Working with local beekeepers, the researchers collected audio and video recordings of hornets attacking their apiaries. Microphones placed in hives captured nearly 30,000 bee signals over more than 1,300 minutes of recordings.

The study revealed that honey bees raise the alarm for fellow bees when threatened by giant hornets. The hornets mount attacks that can destroy entire hives. When giant hornets appear outside a hive, bees respond with a cacophony of sounds, especially antipredator pipes.

The pipes are harsh and irregular. Their shifting frequencies resemble the shrieks and screams of primates, meerkats and birds responding to predators.

When giant hornets attacked, the hives were noisy and frenetic. Bees increased their chatter to levels eight times greater than control colonies, which were calm and quiet in comparison.

When bees make antipredator pipes, they also raise their abdomens, buzz their wings, run frantically and reveal their pheromone-producing Nasonov’s gland, according to the study. Researchers say this behavior suggests that bees present multiple types of information to get the attention of other bees.

The warning signals draw bees to the hive entrance where they take defensive action. This includes repelling giant hornets by spreading animal dung around the entrance. This use of dung as a defense against hornets, first documented by Mattila in 2020, is the first reported example of tool use by bees. The bees also attack collectively in “bee balls” around hornets, stinging them to death.

“[Bees] are constantly communicating with each other, in both good times and in bad, but antipredator signal exchange is particularly important during dire moments, when rallying workers for colony defense is imperative,” researchers said in the paper.

“This research shows how amazingly complex signals produced by Asian hive bees can be,” said co-author Gard Otis of the University of Guelph, Ontario. “We feel like we have only grazed the surface [in] understanding their communication. There’s a lot more to be learned.”