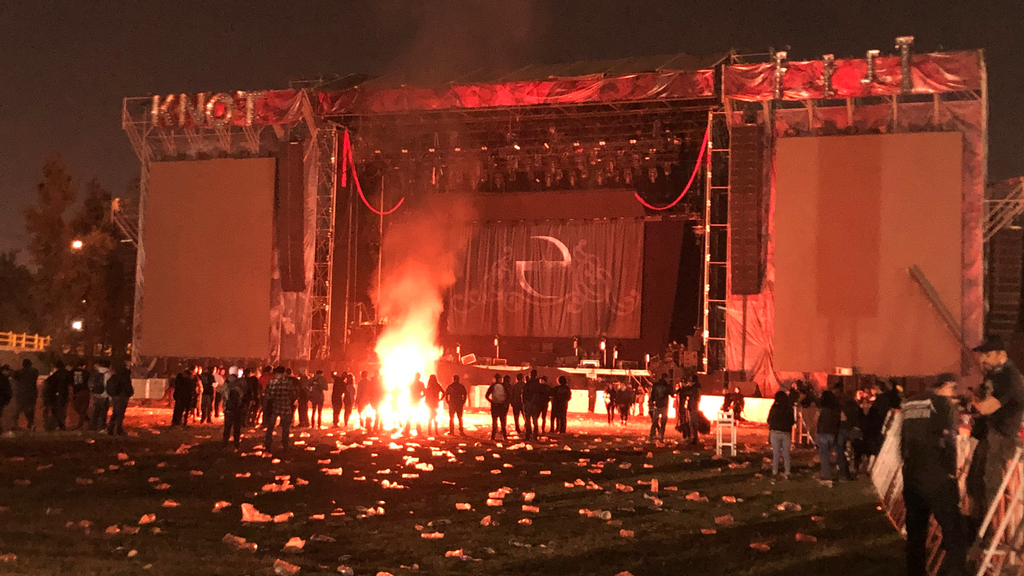 At the 2019 Knotfest, in Mexico City, angry fans created chaos, performances were canceled and instruments and production equipment were set on fire. (Julio Guzmán/Zenger)

MEXICO CITY — The death of eight people at Travis Scott’s Astroworld concert in Houston is a tragic reminder of the dangers mass concerts pose, especially when they have organization problems.

The 2019 Knotfest, an international heavy metal festival, could have been an unforgettable event, but instead angry fans unleashed chaos and destruction. The result was a burned drum kit, severe damage to equipment, performance cancellations and assaults.

Challenges began before the performance of the American band Evanescence, at 9:10 p.m., on the Oceanía Sports Club’s main stage. Slipknot was to be the band closing the festival.

But thousands of attendees battered down one of the fences between the main and VIP sections and overcrowded the stage area. Security officers were unable to control the crowd.

Live Talent was the event organizer. Concerned about the lack of security, its employees requested attendees to step back from the fence. The company announced through social media that the remaining bands would play if the audience followed the safety protocols. However, most attendees could not understand the reasons for the delay because there was no cell signal.

Four and a half hours later, the impatient attendees began hurling insults. Some jumped over the fence surrounding the stage, dismantled Evanescense’s drum kit and threw some pieces to the public, along with production equipment.

Later, they burned chairs, the drum kit and several pieces of sound equipment. The members of the security team hired for the event ended up hiding, rather than confronting the agitators. Some attendees shouted profanity, others were assaulted, and still more took selfies with the flames in the background.

“It was a bittersweet experience. They [the bands] brought some of the best audio equipment in the world, and they were good bands. It’s not surprising because the organizers have had problems at all their events. Bands often cancel their presentations,” Francisco Acevedo, who was at the event, told Zenger.

Knotfest was not the first time that Live Talent has been involved in controversy.

The company canceled the performances of Rob Zombie, Testament and other star bands announced for the 2018 Force Fest festival.

Mass concerts have presented similar challenges for a long time. The Nov. 6 concert in Astroworld only proves the problem and the risks remain.