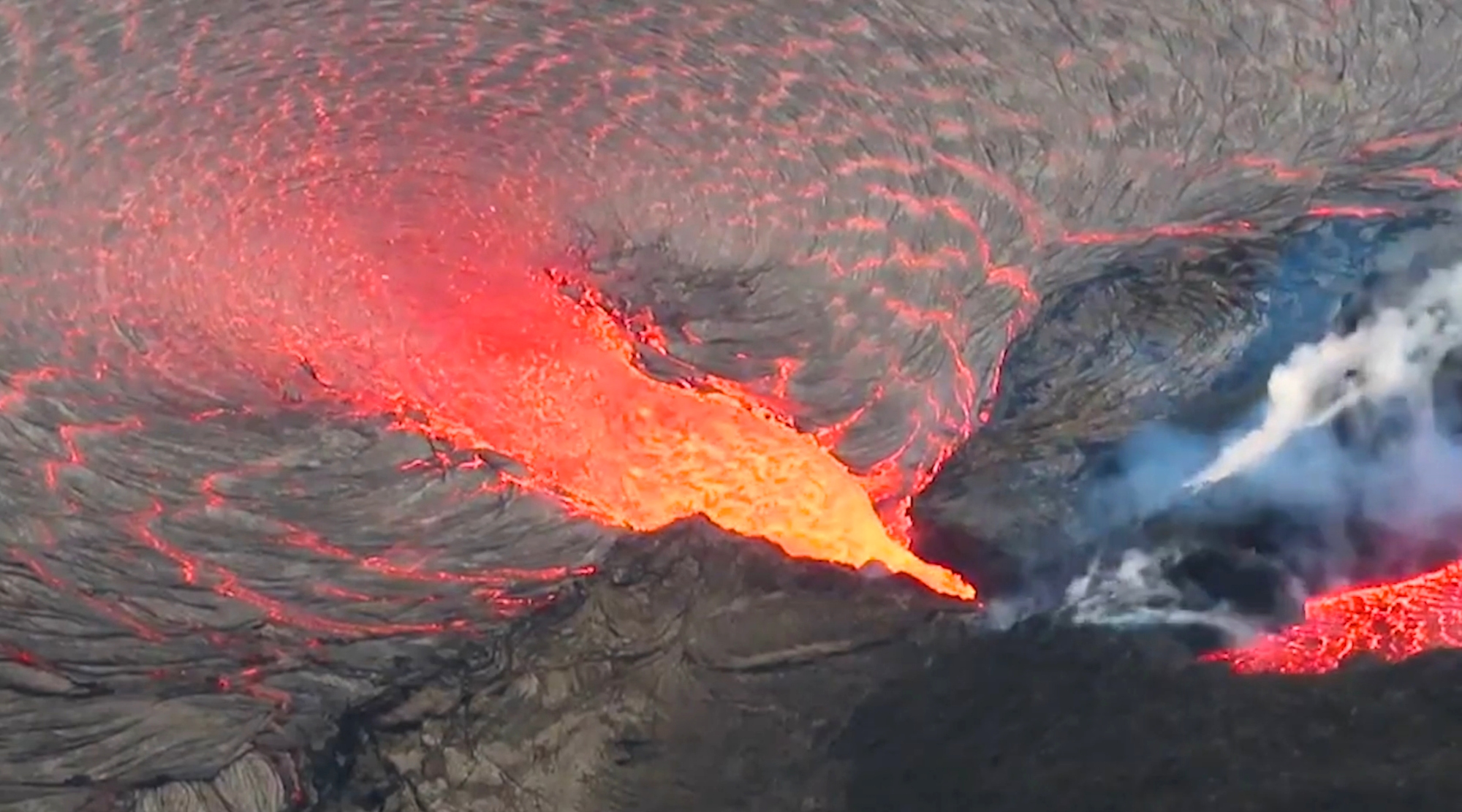 Lava flows from a vent in the western wall of the Kīlauea volcano's Halemaʻumaʻu crater on Oct. 29. (U.S. Geological Survey/Zenger)

Video shows the continuing eruption of the Kīlauea volcano in Hawaii.

In an update on Nov. 9, the volcano was erupting from a single vent in the western wall of Halemaʻumaʻu crater, according to the U.S. Geological Survey and the Hawaiian Volcano Observatory

“As of this morning, Nov. 9, 2021, lava is erupting at a higher rate compared to the diminished activity reported yesterday,” the geological survey website said. “Activity has returned to levels observed prior to yesterday’s brief decrease in activity. All lava activity is confined within Halemaʻumaʻu crater in Hawai‘i Volcanoes National Park. Seismic activity and volcanic gas emission rates remain elevated.”

The Halema‘uma‘u crater is at the summit of Kīlauea, the most active of the five volcanoes that form the Big Island of Hawai’i.

The video posted was filmed on Oct. 29. It shows “the lava lake through a spillway in the spatter cone,” according to the U.S. Geological Survey.

The agency said that gas and seismic activity remain high at the summit. The website says that “earthquake hazards occur regularly in Hawaii” and that “frequent and long-lasting eruptions and recurrent strong earthquakes in Hawai’i create a unique combination of natural hazards for people across the Hawaiian Islands.”

The volcano is known to be a source of “large explosive eruptions,” the U.S. Geological Survey said.

Volcanic activity resumed on the afternoon of Sept. 29 for the first time in almost a year. Its last major eruption took place between May and September 2018 and led to thousands of local residents being displaced and the destruction of 716 homes.

During the eruption in 2018 lava flowed from 24 vents, with one major explosion sending debris flying 30,000 feet high.

Believed to be between 210,000 and 280,000 years old, the Kīlauea volcano emerged from the sea about 100,000 years ago. Kīlauea is located on Hawai’i, the official name of the largest island in the archipelago, also called the Big Island. (Not to be confused with Hawaii, the state.)

The Hawai’i island consists of five volcanoes, four of which are classified as active: Kīlauea, Mauna, Mauna Loa, Hualālai and Mauna Kea. In fact, Hawaii, the only U.S. state not in North America, is made up of 137 volcanic islands.