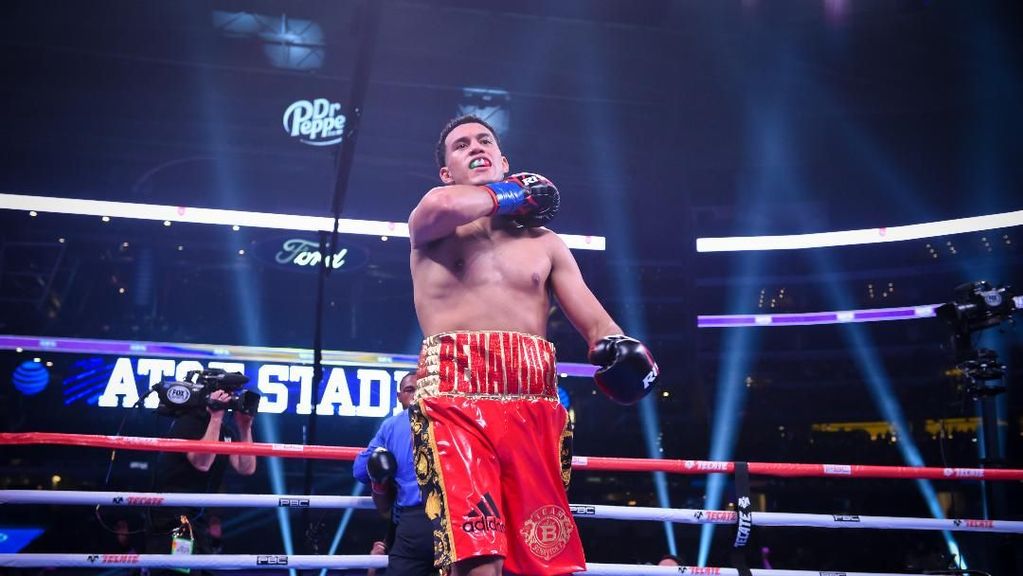 David Benavidez does a throat-slash gesture during one of his recent bouts. He will battle last-minute replacement Kyrone Davis on Saturday night. (Valentin Romero)

The on-again/off-again fight between undefeated super middleweight (168 pounds) David Benavidez (24–0; 21 knockouts) and Jose Uzcategui (31–4; 26 knockouts) is officially off. Initially scheduled for Aug. 28, the bout was postponed when Benavidez tested positive for COVID. It was rescheduled for Nov. 13, but two weeks before that scheduled showdown, Uzcategui tested positive for the banned substance, rEPO.

But Benavidez will still get a bout on Saturday night. Stepping in to take Uzcategui’s place is Kyrone Davis (16–2–1; 6 knockouts). Davis’ most recent bout was a unanimous decision win over Martez McGregor in September.

Benavidez, the former two-time WBC champion, is seen as one of the most feared guys in the division, given his size, tremendous punch output and power. In his last outing, in March, Benavidez became the first man to stop the durable Ronald Ellis in the 11th round.

His bout with Davis can be seen live on Showtime this Saturday night, along with a co-main event featuring Benavidez’s brother, Jose (27–1–0; 18 knockouts), who will be up against Francisco Emanuel Torres (17–13–0; 5 knockouts).

David Benavidez opens up to Zenger about the opponent change, the importance of being able to adjust on the fly and more.

Benavidez: I am doing great, and yourself?

Zenger: I can’t complain, David. Thanks for asking. Given the fact that you had an opponent change, how was training camp?

Benavidez: Training camp was good, man. Everything has been pretty good. The only bad thing was Uzcategui coming out positive for steroids. He still gave me the motivation to work hard and work my butt off in the training camp. I feel like the work was already put in and done, and if the opponent changes two weeks prior to the fight, it really doesn’t matter.

Zenger: Due to COVID, promoters have been doing a great job of having other fights in and around the weight class of the main event in the case of a positive COVID test, so it appears that they’re adjusting on the fly and adapting in the new wave anyway. It does suck that Uzcategui tested positive, though.

Benavidez: Yeah! You just gotta be ready, man. It’s not even about that really, if you train for something, and the opponent uses a completely different style than what you trained for, you have to adapt anyway. With me and my training, I spar with four rounds with three different sparring partners at a time. My mentality is already ready to change, and switch up, and adapt to a different style. I’m already ready for that.

Zenger: Given the fact that he tested positive so late into the game, were you afraid you would lose the date and be rescheduled again?

Benavidez: No, they already had a couple of replacements ready. That’s the thing about this, like you said, because of COVID, it could have been a possibility. So, they keep standbys. If I got COVID or if Uzcategui got COVID, the show had to go on. They had replacements on standby. Hats off to Kyrone Davis and his team. I know he’s a tough fighter. He fought Anthony Dirrell and gave Dirrell a hell of a fight. I know he’s going to be a live dog. I know he’s coming in very prepared for this fight. He will be ready, and I’m extremely ready as well.

Zenger: I have discussed you off record with his trainer, [Stephen] “Breadman” [Edwards], and I know he has a ton of respect for you. Given that, and letting his guy accept this fight on short notice, I’m sure you are expecting a very motivated Kyrone Davis.

Benavidez: Yeah, definitely! I have a lot of respect for Kyrone Davis, too. He is a great fighter, and he had probably been training for a while; that’s probably why he took the fight. He was probably in shape, probably ready. … Hats off to them. It’s going to be a good fight. At this level, there are no easy fights. You just gotta be ready for whatever comes your way.

Zenger: Were you familiar with Davis prior to him accepting this fight?

Benavidez: I watched him fight Anthony Dirrell. He gave Dirrell a great fight. I always watch film on my opponents. I feel that’s the best way to come prepared. He’s a combination puncher. He’s a boxer but not really; he stays in the pocket a little bit more. He doesn’t really use the ring that much, but I feel like with me, once they feel my power, they usually start using the ring. It will be my job to cut the ring off, find the jab and then find the body shots. Just like in my other fights, Ronald Ellis was a great fighter, too. I feel like I bring the best out of fighters. They have no choice but to bring their best, or they get stopped. I’m expecting the best Kyrone Davis possible.

Zenger: How important was it for you to nearly complete 11 rounds with Ronald Ellis in March, given the fact that 2020 was not the busiest year for any fighter?

Benavidez: It was really important. I did have a fight in August 2020, so it’s been really good getting these rounds in, especially if I get Canelo (Alvarez) in the future. I got 10-rounds in with [Roamer Alexis] Angulo, and then 11 with Ellis, and however long this fight goes with Kyrone Davis. I’m learning more in there. I’m gaining more confidence. I’m learning a lot about myself, too.

I think the good thing about that is I’ve come to realize I do great in the first half of the fight, but I do even better in the second half. I’m an all-around great fighter — especially if I get the opportunities against Canelo or whatever great fighter it may be, [Jermall] Charlo, Caleb Plant. I’m going to know exactly what to do and how to work each and every round.

Zenger: Does being on the same card as your brother, Jose, add anxiety or pressure, as he fights before you?

Benavidez: No, it doesn’t add any more pressure or anything. If anything, it makes me more into the card. I’m seeing my brother in there. The only thing is, I won’t be able to be out there when he’s fighting. I will be preparing in the dressing room while I watch him fight. It’s always been a dream come true; I haven’t fought on the same card with my brother in five or six years.

The last time we fought together was in the same arena, though it was then called US Airways Center. It’s definitely a treat. We’re doing exactly what we have to do. This boxing game is a wild ride. I’ve been a professional for eight years, and we’re still here. We’ve been working hard and we’re going to keep this train rolling.

Zenger: Now that you have reached main-event status, how have you adjusted to the media obligations and everything that comes with headlining?

Benavidez: You learn to get used to the lights and the media coverage, and everything that comes with it. Even the bad parts about having a little bit of fame, you have your haters, and things like that. You just get used to it. It’s part of the job. I have been doing this for a very long time. I’ve been boxing for 21 years, and professionally for eight years. I’m definitely at the spot I wanted to be at — the spot I always knew I would be at, and we’ll handle it very well.

Zenger: By no means am I overlooking Davis, but obviously you were an interested spectator for last Saturday night’s Canelo-Plant fight. Any preference on which one you’d most like to face?

Zenger: What can people expect when they watch David Benavidez on Saturday night?

Benavidez: It’s going to be a great fight. I put my heart and soul into this training camp. I have been away from my wife, and away from my son for about two and a half months. I was already training hard. And I was already training hard in my last camp before I caught COVID. I have been working extremely hard. You can expect a lot of hard punches being landed, a lot of body shots being landed, just an overall great performance. That’s the type of fighter I am. I have 24 fights with 21 knockouts and no losses. I’m definitely going to be coming to hurt Kyrone Davis. It’s going to be a great performance.

«Previous Post
Zoe Saldaña Rules As A Warrior Princess In ‘Maya And The Three’»Next Post
VIDEO: Astroworld Tragedy Is Nothing New, Mass Concerts Have Massive Problems