King Sennacherib and his army built a ramp for a battering ram to break down the walls of Tel Lachish in 701 B.C. 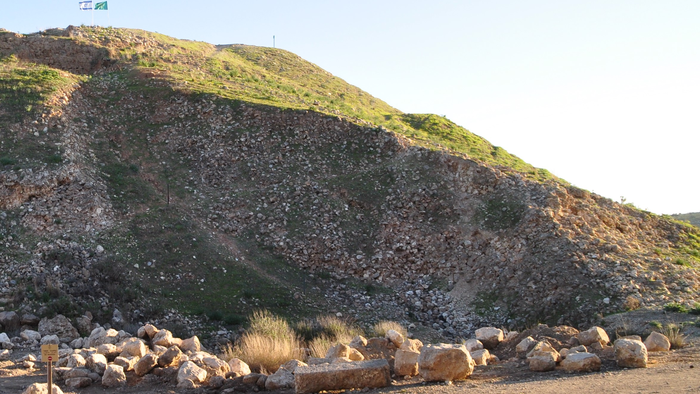 At what was once the second-biggest city in the ancient Kingdom of Judah, Assyrians built a siege ramp with 3 million+ stones to haul up a battering ram and breach the city walls in 701 BC. (Courtesy of Yosef Garfinkel)

Twenty-seven centuries ago, the Assyrian Empire dominated the Middle East with military conquests that stretched from Egypt to Iran, using siege ramps that are now better understood by Israeli archeologists.

In 701 B.C., Assyrians attacked the hilltop city of Tel Lachish by building a siege ramp that could bring battering rams up the slope to batter the city walls. Once the defenses were breached, King Sennacherib and his soldiers were able to penetrate the city and slaughter its people.

For the first time, archeologists have reconstructed how the Assyrians built the ramp to breach Lachish’s walls.

Tel Lachish, now a national park, was second in importance only to Jerusalem in ancient Judah, which is now part of the modern state of Israel. Researchers relied on various sources to aid their analysis, including Biblical texts, stone reliefs depicting Assyrian battles, Akkadian inscriptions, excavations and modern images recorded via drones. Their findings were published in Oxford Journal of Archaeology.

Study co-author Yosef Garfinkel of Hebrew University used methods including photogrammetric analysis of aerial photos to create a detailed digital map and practical model that take all aspects of the battle into account.

The ramp was made up of small boulders, according to the researchers, weighing about 14 pounds (6.5 kg) each. Finding enough of these boulders posed a serious logistical problem for the Assyrians, who needed about 3 million of them. Collecting stones from the surrounding landscape would have been time-consuming, said Garfinkel, so the army likely found a closer source at the far end of the ramp.

“At Lachish, there is indeed an exposed cliff of the local bedrock exactly at the point where one would expect it to be,” said Garfinkel.

The Assyrians began building the ramp about 260 feet away from the city walls, right where the required stones could be quarried. These were passed hand-to-hand by laborers working in parallel on the ramp in round-the-clock shifts. Garfinkel said he believes about 160,000 stones were moved each day.

“Time was the main concern of the Assyrian army. Hundreds of laborers worked day and night carrying stones, possibly in two shifts of 12 hours each. The manpower was probably supplied by prisoners of war and forced labor [from] the local population. The laborers were protected by massive shields placed at the northern end of the ramp. These shields were advanced toward the city by a few meters each day,” said Garfinkel.

The Assyrians could therefore build the wedge-shaped ramp in only 25 days, according to researchers. “This model assumes the Assyrians were very efficient; otherwise, it would have taken months to complete,” said Garfinkel.